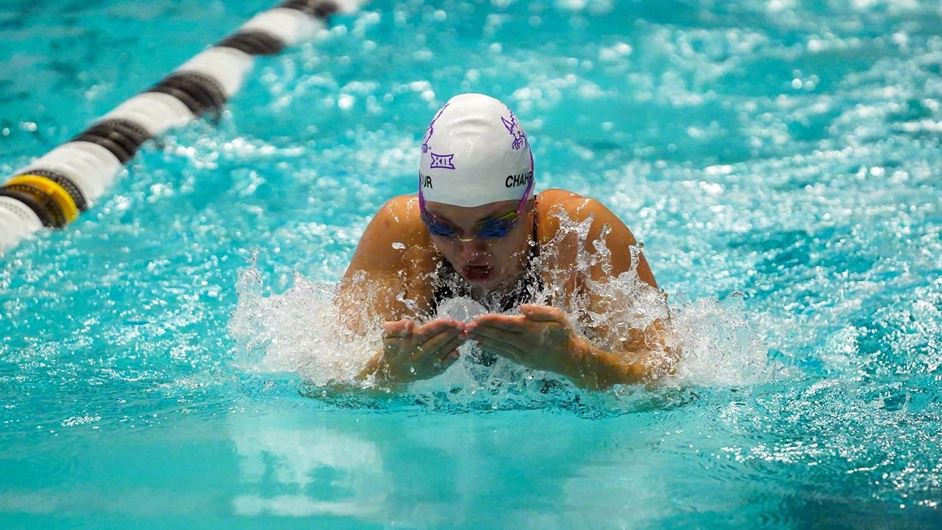 The Frogs broke five school records during Day Two of the Art Adamson Invitational and Day One of the SMU Invite.

COLLEGE STATION – Five more school records were broken by the TCU swimming & diving teams during Day Two of the Art Adamson Invitational and Day One of the SMU Invite.

Additionally, the Frogs also recorded eight B cuts on the day.

Kicking off the finals, the A team of Rylee Moore, Claire Chahbandour, Ashleen O’Brien and Olivia Rhodes broke the school record in the 200 medley relay with a time of 1:40.02. That time was good for third overall.

Chahbandour also broke the school record in the 100 breaststroke prelims. Her time of 1:01.47 was good for her first B cut of the season.

Luke DiMiceli broke another school record in the 400 IM, following up his record-breaking performance in the 200 IM yesterday. His time of 3:49.24 gave him his first B cut of the season.

On boards at the SMU Invite, David Ekdahl earned himself his second school record of the season as he scored a 400.60 on 3-meter, which was good for a Zone cut. Faith Harms-Zacharias also had a strong day at SMU as she notched a Zone cut on 1-meter with a score of 272.15.

At the end of Day Two, the men’s team sits in third with 425 points and the women’s team is fourth with 348 points.

Up Next
The final day of the Art Adamson Invitational begins with prelims at 9:30 a.m. with the finals at 5:30 p.m. The SMU Invite continues for the diving teams.