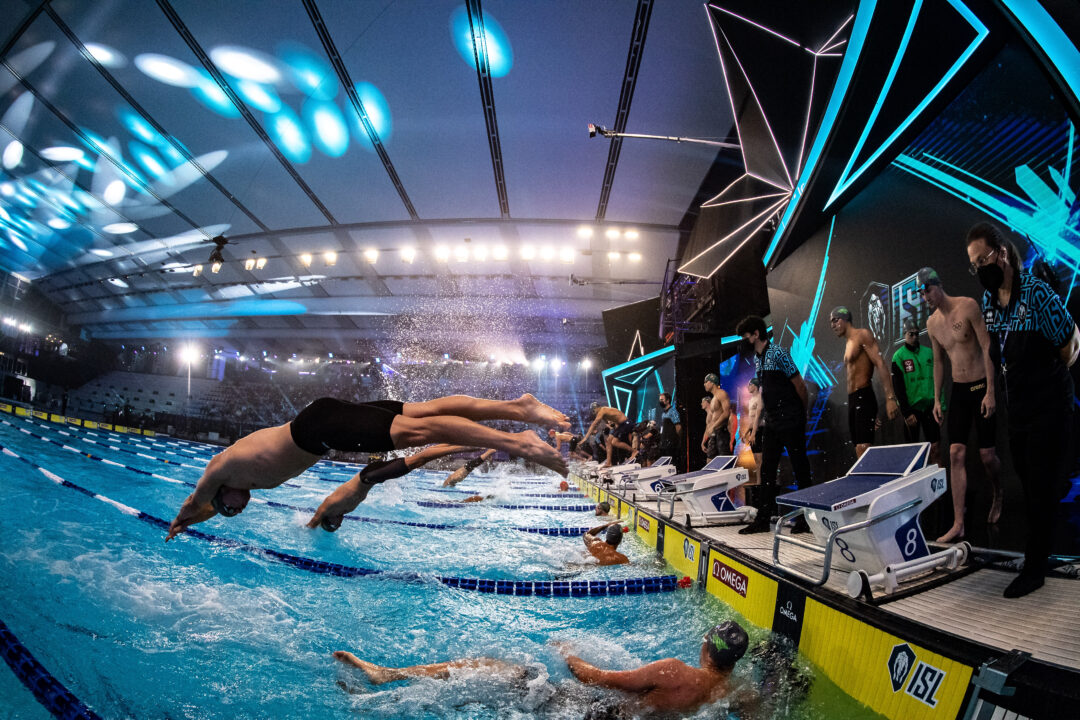 While word of a possible ISL boycott made headlines a few weeks ago, things appear to be on track to have the playoffs commence on November 11. Archive photo via Giorgio Scala / Deepbluemedia / Insidefoto

Our most recent poll asked SwimSwam readers if they would support ISL athletes if they opted to boycott from competing until they were fully paid for the 2020 season:

Question: Would you support ISL athletes holding out from competing in the playoffs if they haven’t been fully paid for last season?

Word of a possible athlete boycott from the International Swimming League (ISL) first seriously arose on October 23 when The Sydney Morning Herald reported that clubs and athletes were considering holding out of competing if they weren’t paid in full prior to the playoffs beginning on November 11.

At the time, London Roar general manager Rob Woodhouse was quoted as saying: “It’s not good enough. I’m really hoping all athletes are paid in full from last season before the playoffs commence on November 11.”

The poll asked readers if they would support athletes in holding out from competing if Season 2 payments had not been received. An overwhelming majority, just over 85 percent, said they would.

Since the initial report came out, some of the league’s veteran swimmers have spoken to SwimSwam regarding the situation.

Aqua Centurion captain Fabio Scozzoli and Swimmers’ Alliance member Cody Miller both said that a boycott was never a viable option for the swimmers, noting that it would not be in the best interest of the sport to put the league’s existence in jeopardy.

“As someone that’s a part of this league, we’re all just kind of rolling with the punches and understanding that there are some growing pains and they’re trying to work things out,” Miller said on the SwimSwam Podcast.

“And hopefully, it gets better. From what I have heard, I think everybody — at least the athletes — have been paid out almost fully. So they’re remedying some of those late payments.”

Perhaps a better poll question would’ve been: Is boycotting the right move for swimmers in this situation?

Of course, it’s no surprise that most fans would support athletes in holding out—they deserve to be paid and shouldn’t be expected to continue to compete at the highest level without receiving what they’re owed.

The problem lies in the fact that, as Miller noted Tom Shields said in one of their threads, boycotting/striking is essentially a nuke and would have severe ramifications on the league’s existence.

More than 14 percent of voters said no, they wouldn’t support a boycott. This is likely a group that basically believes it’s just not the right move for the swimmers to make at this juncture.

The ISL playoffs are scheduled to begin on November 11 in Eindhoven, with six matches set to determine the four clubs advancing to the ISL Final. The final, originally expected for January 2022, has been bumped up to December 3-4 in Eindhoven.

Below, vote in our new A3 Performance Poll, which asks: Assuming the Cali Condors, Energy Standard and London Roar are near locks, which of the remaining ISL clubs has the best chance of joining the aforementioned three in the ISL Final?

So what I hear people saying is that they don’t want to see the ISL succeed and have never had the experience of a business startup.

Where are you hearing people say that? What I’m hearing is that decent startup businesses pay their staff and suppliers, I don’t think it’s too much to ask, it’s a disgrace not to.

85% support the killing off of ISL.