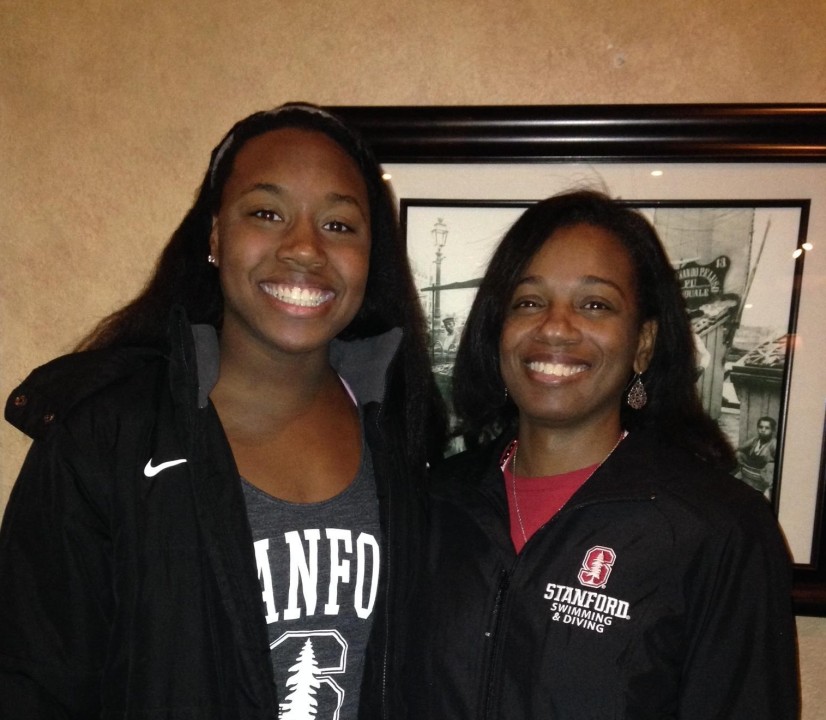 SwimSwam proudly presents the series, SwimMomMonday in which “ordinary” swim parent Anne Lepesant talks to “extraordinary” swim parents about the similarities and differences we experience in raising swimmers. This week Anne talks with Sharron Manuel, mother of American, US Open, and NCAA record-holder, Simone Manuel.

My husband and I both enjoyed playing and competing in sports growing up.  It was only natural for us to introduce all three of our children to all sorts of sports.  Between the three of them, they have played soccer, basketball, volleyball, dance, baseball, swim, and even played musical instruments.  By watching them and observing them early on in various sports, it was evident to us very early that they were all athletically gifted.

Simone was introduced to swimming by watching her two older brothers swim summer league.  She always loved the water and thoroughly enjoyed swimming.  When she was 4 years old she asked to join the swim team.  I didn’t think she was ready so to appease her, I told her she had to take swim lessons first (as her brothers did).  We enrolled her in swim lessons that summer and on the 2nd day of lessons, the swim instructor had her swim across the pool.  That was the 1st eye opener for me.  Simone continued to only swim summer league and experimented with other sports and activities but swimming was her favorite.

Athletics has always been an integral part of our lives.  Integrating school, social life, family life, and sports were an extension of everyday life for us.  We have always had to juggle basketball tournaments, swim meets, school, etc. Simone was her brothers’ number one cheerleader, attending lots of basketball tournaments with her pom-poms and cheer gear.  Her brothers drove her to lots and lots of morning and afternoon practices, and attended meets when they could.  Although it was challenging, we told them that we would support them in pursuing their dreams. All we asked was that they did their best. Our family motto was, D.Y.B., which means “Do Your Best” (in everything).  They also understood that school was a priority and it was important to do well academically.

I don’t think we parented them differently.  All children can be exceptional at something.  We always expressed to them that each one was special in their own way.  The only difference was that each one had a different love language and needed a different kind of encouragement at different times.

The best part of being a swim mom or sport mom is being their #1 cheerleader.  It’s rewarding as a parent to support them, cheer for them, offer words of encouragement, and watch them grow and mature.

The biggest challenge was juggling their schedules; especially when we had 3 children going in three different directions.  I can’t tell you have many miles we’ve accumulated over the years on our cars/vans!

Simone Manuel and her brothers prepare a meal for their grandparents. Photo courtesy of Sharron Manuel

Just this past March, we were faced with that challenge. Simone was competing at her first NCAA Championship and her brother was competing at his first basketball NCAA tournament.  As a compromise, we went to her brother’s basketball conference championship and I attended the swimming NCAA championship.  Between the first swim session, I spent my time in the hotel room glued to the TV with my SMU t-shirt and pom-poms cheering for my son and their team.  The children make it easy for us because they are so understanding and often express their gratitude for the sacrifices we make.

Simone Manuel with her parents after she made the 2013 World Championship team. Photo courtesy of Sharron Manuel

It’s hard to pick just one memory, so I’ll share two of my favorite.

The first one was when she made the 2013 World Championship team in the 100 freestyle from lane 8.  It’s memorable because Simone set that goal a year earlier and I watched her continue to have faith that she could do it. Even though she was seeded 8th, she refused to believe that she was not going to make that team.  To be in the stands and watch her go for it and actually make it was unbelievable.

The second favorite memory was watching her 1st NCAA Championship experience unfold.  Simone decided not to swim in high school and club swimming was very different.  Those smiles I saw on her face at the end of those relays, the high-fives, the team hugs, and the cheers shared between her and her teammates were priceless and a totally different experience for her.  To see her that happy with her teammates made it all worth it!

8. Do you get nervous watching her swim?

We work to keep things in perspective. They also understand that there will be ups and downs but to stay focused on the big goal.  My role as a parent is to be there to listen to them, encourage them, guide them, and pray for them.  We have also expressed and demonstrated to them that they are loved no matter what.  If they understand that, they will be OK.

My advice for other swim moms would be to be supportive. Allow your children to dream. If they believe they can do it, step back and let them try.  Just be there to guide them, encourage them, cheer for them, and enjoy the journey.

Thank You Simone. It is wonderful to know that from such an early beginning you arrived at such a fabulously great plateau, the Rio Summer Olympics. America and the world of athletics applauds your efforts and appreciate you bringing home the hardware ( the Olympic medals).

One question befor closing, it seems rather unusual that you left the Rio Olympics ahead of the closing date and further competitions. Is there any reason in particular that you might share with the news media as to the reason you, Simone, had to leave?

Is your parents Haitian? Your is French kind of attracted my attentions.

I am a descendent of the Nelson Manuel Family of North Carolina. From the Red Springs and Pembrook area, that group of Manuels were thought to be Lumbi or Croatan Indians. My grandfather Harry, was the youngest of eight Manuel siblings. The others were Victor, John, who moved to Norfolk VA and Hattie and Rebecca who moved to Orlando Florida. Cleveland and Samuel stayed close to the eastern NC areas. Harry and two brothers resided in Leland and later, one sister, Mary Alice in Wilmington NC.

The offsprings of Victor Manuel were very athletic and competitor in football and basketball; EJManuel played for the NY BUFFALO BILLS, Marquis Couston played for the NEW ORLEANS SAINTS, another played recently for… Read more »

Another functioning Afro-American family. I am not surprised. This is the hidden norm.

AWESOME FAMILY, I know the family is happy because it was a joy to sit back and watch history in the making, Congratulations again Simone continue letting god use you.TYJ for blessing this family????

Simone Manuel is awesome! Now, she has 2 gold and 2 silver medals at the 2016 Olympics in Rio. We salute you Simone!!!!

So proud of Miss Simone Manuel! A fine young lady that the USA is lucky to have representing us!