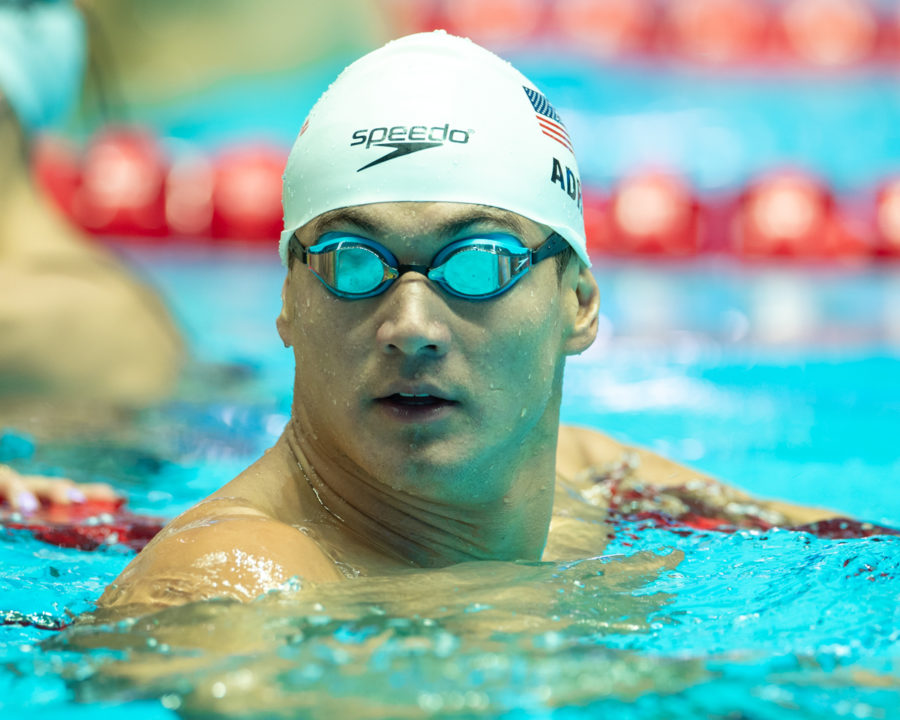 We're back with swimming's TopTenTweets, but this week, we've got our 19 favorites of 2019. Archive photo via “Rafael/Domeyko Photography”

We’re back with swimming’s TopTenTweets presented by Arena, where we round up the best of the swimming Twitterverse. This week, we’ve got out 19 favorite tweets of 2019.

Heyyyy we recognize that font! Top-notch analysis from Yannick.

Announcer: The results are unofficial.

Me trying to play it cool despite not touching a single wall with two hands:

A play in three acts (yes that was actually my best time) pic.twitter.com/dTnCGaOwKs

Brother of the year?

When you get selected for the freestyle relay again but not the medley https://t.co/m3YPt2fmx7

My coach when I finished warmup 5 mins before everyone else cuz I didn’t do the 300 reverse IM https://t.co/CfI3NmwYX1

So this was universal, huh.

Touring around with @RussWhitakerWSU.. found some iconic statues inspired by the first ever swim coaches pic.twitter.com/2pDz8hEcRB

Swim coach humor doesn’t always hit. But when it does? It HITS hits.

The dab will never die on my watch https://t.co/UEOZn9oDes

me to myself when the consequences of my own actions start rolling in https://t.co/uCxisOS31o

The clear winner of the caption contest.

I am really proud of my son at this swim meet- he ended up finishing well before the first playoff game kicked off today.

Oh, and can we add that she is a teenager, was the top five in the world in the 1500, and swam her first 25K at the world’s biggest swimming event outside of the Olympics? This thread got big. Lots of blue checkmarks in that man’s mentions.

Man it feels good to oficially be recognized as the fastest man ever, but I was faster than that in practice last week with Joseph Schooling chained to my ankles #NCAASwimDive

Many levels of SwimSwam comment culture at work here.

Well since @swimswamnews posted it, I don’t feel so bad.

Doesn’t even miss a beat in the celebration. #NCAASwimDive pic.twitter.com/jEtpwZep19

From Durden’s pure excitement to the four guys immediately jumping to pick him up (and of course Carr’s very fast swim), we love every single part of this. Our Instagram post of the same video was our sixth most-liked post in the last year.

No, it wasn’t first but it certainly beats sitting at home watching from the couch! #backinthewater #teamspeedo pic.twitter.com/xPGEzNIPyc

Madison’s should be number 1, that was the SwimSwam comment section twitter moment of the year. And Bryce’s would make a perfect 20th.

How much did Madison pay you to say this

Justin Wright: admits to not touching a single wall in 200 fly with two hands

Lilly King: dq’d on a close call for non-simultaneous touch

King did it at Worlds.

Where did the joseph schooling practice joke come from? I see it many times here

Back at 2017 US Nationals, Caeleb Dressel swam 50.87 in the 100m fly, which was a big surprise. Note that before therace, we always thought he was a free sprinter. A few days/weeks later, Joe claimed that he swam a 50.7 at practice in reaction to Caeleb’s swim but he has yet to swim that kind of time in a meet. Basically, Joe is being mocked every time that kind of comment is made.

Thanks for explaining. The ‘Joseph Schooling chained to my ankles’ twit is funny by its own but now it got better lol.