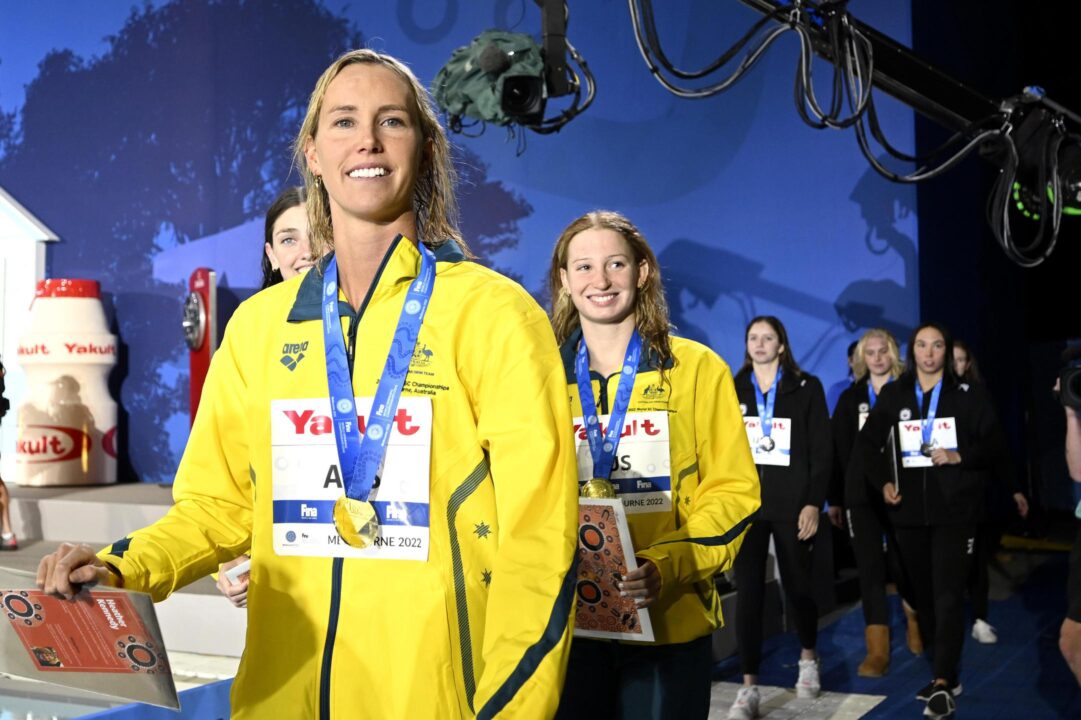 Check out what it will take to make the Australian squad for the 2023 World Championships in Fukuoka, Japan this summer. Archive photo via World Aquatics

Swimming Australia has published its selection criteria for the 2023 World Championships set for July 24th – July 30th in Fukuoka, Japan.

The nation’s sole qualification meet for the World Championships is the 2023 Australian Swimming Championships, slated for June 13th – 18th in Melbourne, Victoria.

A maximum of 28 male and 28 female athletes may be nominated for the Australian roster, with the first and second-placed eligible athletes in the open final of individual Olympic events gaining selection, provided they meet the stiff Aussie time standards.

After following the FINA time standards for the 2022 World Championships in Budapest, Swimming Australia appears to be reverting to its prior practices of setting its own qualification times which, in most cases, are faster than the FINA ‘A’ time standards.

Australia typically isn’t alone in this practice, as Great Britain and Japan are both notorious for setting super quick qualification times that, in a handful of events, would require beating the national record to achieve.

As a reminder, the FINA qualifying standards for swimmers for Fukuoka were created using the fastest of two times – the qualifying ‘A’ time standard for Budapest 2022 and the 16th place finishing time from the prelims there.

As in the past, Swimming Australia‘s qualification policy includes a caveat that additional selections may indeed be made by the National Head Coach, Rohan Taylor, at his absolute discretion.

Australia’s 2022 World Championships squad included 35 swimmers in all, but last year also had the Commonwealth Games on the calendar with a few swimmers choosing to compete at one or the other.

In Budapest, the green and gold brought home 17 medals in all to finish in the runner-up spot behind the United States. Australia’s haul included 6 golds, 9 silvers and 2 bronze.

Japan did it and look where they are now , Olympics werenot good at all for them , the swimmers are forced to peak at the wrong moment (trials) , to reach these stupid time standards

I don’t agree with it but Australia used similar standards for Olympic trials.

Italy did it too and look where they are now…
However, Italy anticipates the selection by a few months…

I can understand the reasoning behind not sending every person with an A cut. There are times when you get a veteran with a mediocre time and no chance of a medal or relay potential who essentially just becomes a passenger.

However, it’s throwing the baby out with the bath water. International experience is invaluable for up and comers. I’m still pissed we left Dekkers off Tokyo when she had the A cut and could have gained incredible experience.

The negatives of this system far outweigh the positives.

My ex was on the cusp of making the dolphins a few times around London and he said the selections are super political. He claims they leave it vague on purpose so… Read more »

Comparing the team now to the complete trainwreck of London, I think things might be a bit better within the Dolphins.
The rest of SA is still an abomination, of course. The standard AUS expects for a swimmer to get in the team is a finals spot or they can save a lot of hassle in relay heats, that is why the cut is so harsh. But young talent passing the A cut but not the QT should get in for experience.
Ideally WA/IOC would not have a team limit at all, any swimmer passing the cut can enter, up to 2 per event and 8 per relay. Though there are probably arguments against this.

I think they always want to “save money” and not send too many swimmers. But there are plenty of other ways to save money that do not take away experiences fro younger on the cusp swimmers.

That is the argument I had in mind, especially for the lesser federations.

If a swimmer finishes first or second and meets the ‘A’ cut they should be on the team – no ifs and buts. And anyway, what’s the definition of a “veteran”? Mack Horton? Emma McKeon? Cate Campbell? The selection trials are an open meet, not an age handicap.

What I mean by that is I can understand not wanting to send an experienced swimmer who has no chance at winning or contributing to any medals, as opposed to sending a young swimmer who is unlikely to win a medal or contribute to a relay because it gives them valuable experience.

I’ve always believed Australia should follow the USA example and select all swimmers who finish first or second and are under the FINA (oops! World Aquatics) ‘A’ qualifying time rather than imposing some arbitrary standard. Giving the head coach the discretion to add swimmers even though they didn’t get under the time always has the potential for controversy. It could well be that no Australian male makes the cut in the 100BK, 100BS and 100BF. Of course, selections will be made in those events regardless because of the medley relay. Still, isn’t it better to have a straightforward selection standard rather than go through a subjective and tortuous process about who does and who does not deserve a place on… Read more »

Indeed, why do they make life difficult for themselves, and create unnecessary psychological pain for swimmers with a (WA) qualification A time.

Such QTs must feel punitive for swimmers left home while watching swimmers from other countries slower than them compete.

I’ll correct myself. Russia only had 1 swimmer faster in 2022. Italy had 1 faster and 1 equal. Point is that no nation is guaranteed to get 2 swimmers under that time, at least before the WCs in 2023. Any nation’s male 100 m depth looks poor relative to the Aussie women’s depth at that event.

While we do have great depth the QT is also weaker probably because the women’s 100 free regressed quite a bit last year (just look at what it took to make a final in Budapest year vs in Tokyo) while the men’s was about the same.

The women’s QT is also much further away from the WR than the men’s.

yeah I was more so just pointing out how stupid the criteria for selecting those qualification times is because certain events definitely had weak years comparatively due to several people in those events taking time off after tokyo/retiring/injuries/covid etc so its funny when they’re essentially trying to say that a 47.9 is globally equivalent to a 53.6

Yep; I think all the bleating is frankly “much ado about … not very much !”.

The hard cold reality is that AUS currently does not possess the strength and depth across the board to have 2 legitimately competitive performers in every event. In truth, they never have !! The difference now is that they no longer maintain the pretence.

On the women’s; the strength IS currently such that these QTs should not preclude 2 qualifiers in all bar probably 100BRS & maybe the 2 IMs but there should be at least one for each of those.

With the men; rather than say that there are “strong events; rather its the case of having a relatively small number of quality… Read more »

The men literally just broke a WR in the 100 medley relay a month ago. I think it’s pretty silly to suggest the medley relay is likely a lost cause.

Kyle will obviously qualify in free. Temple should qualify in fly unless he’s super off, and regardless he’ll qualify top 6 in free anyway so they’ll let him swim the 100 fly even if he doesn’t hit qualifying. ZSC will qualify for the 200 and make the 100 A cut so he’ll swim that even if he doesn’t qualify. The only real question mark is Cooper. He seemed to make massive strides at SCW but 53.00 is 1.4 faster than his PB.

Omg I misread it as 54.3 lol. Ignore me. Barring a major breakdown I would expect Cooper to hit 53.00 this year.

Not taking anything away from that relay but that was SC and we are talking LC.

Cooper was impressive in 2021 but his LC 100 went into reverse last year. Looked great over 50 but died 1000 deaths getting home !! A 54sec backstroke leg and your relay is sunk, especially if your breaststroker is off the pace.

ZSC improved his 100 PB incrementally but this QT is still a couple of tenths away. He did OK in MMR in Tokyo but his 2022 relay outings were “not helpful”. He’ll definitely make the team at 200 but he is not the answer for the medley relay. Maybe Yong, maybe Williamson. IF one of them CAN hit that QT or… Read more »

Despite his breakout being in SC, Cooper isn’t a great SC swimmer. His start and turns aren’t great but he out swam others over the water. Barring a major breakdown, he should definitely be swimming a 52. If anything his SCW performance should give us confidence that his LCM performance this year will improve massively.

Also you are OBSESSED with “triaging relays”. You talk about it constantly. There is absolutely no reason for Aus to triage the very last event. There is literally zero possible downside to entering it unless one of the swimmers drowns. I’m not saying ZSC will definitely swim the medley relay: I’m saying that he can swim it as a viable leg. Australia has viable options… Read more »

Thought they’d at least make it until Olympic year before reverting but nope.

Which pool in Melbourne in June? It was freezing in December in summer for the first few days of SC Worlds.

Good question. If it is MSAC then bad weather may make it uncomfortable.

That’s an understatement. Could it be at the indoor pool there?
As I said previously, no one in Melbourne is going to care except for swimming families. They are obsessed with AFL and no other sport will be noticed or reported on at all.

Surely they won’t be using the outdoor pool but then the indoor pool doesn’t have a lot of seating.

It will be indoors. They’re not going to hold it outdoors in the depths of winter. I mean, come on.

its just that they have been very reluctant to use the indoor pool for anything for many years.