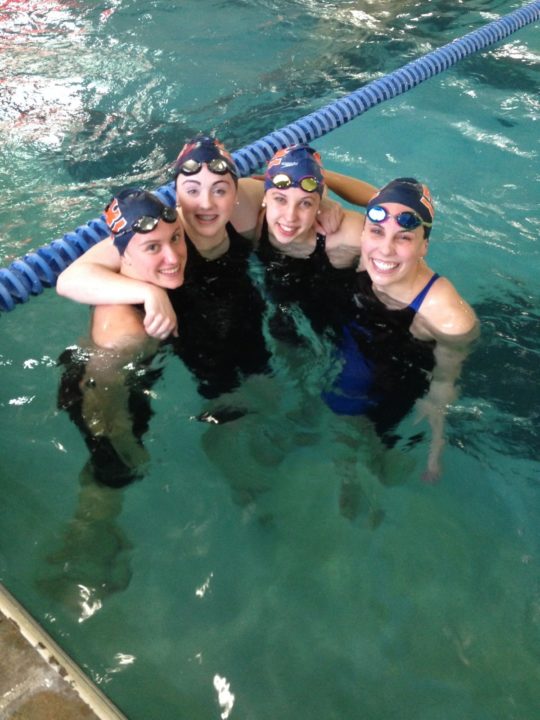 The SwimMac Carolina girls are competing at the TarHeel States Championship meet hosted by SwimMAC at the Charlotte Latin SwimMAC Center. The relay team of Kathleen Baker (17), Caitlin Casazza (17), Elsa Welshofer (17), and Nora McCullagh (16) cruised through the previous record of 3:36.89 set by NCAP in 2013.

It is cheesy because they hosted the meet, and they could have put the event on the meet calendar if they had wanted. Who knows, with the event on the calendar NCAP might have raced against them? Also I imagine one can swim faster in the smooth water of a time trial with only one team racing which seems unfair.

Not sure how this is “cheesy” considering that this meet was not their main focus. All four of these girls competed in a full slate of events at Senior Sectionals two weeks ago, so this was all post-season racing for them. Scratching all of their events to swim this was a no-brainer considering that they already had already finished their in-season individual competitions.

As for the “production” Coach Marsh made of the relay, you also have to realize that he is all about every member of the club being a part of the experience of fast racing. It made the race more exciting and put a little bit more pressure on the girls to hit that record mark. And why… Read more »

Agreed….kids scratch all their events to do a time trial. For a no competition relay time trial fully rested. Pretty Cheesy

Yes it was a great swim. Only problem was the production David Marsh and SwimMac made out of it and the other time trial that took place.