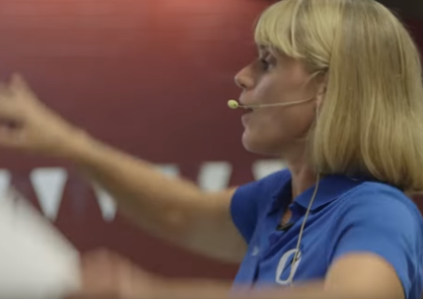 Oesting was the the 2019 American Swimming Coaches Association’s Fitter and Faster Age Group Coach of the Year. Archive photo via ASCA

Megan Oesting is the new head coach of SwimMAC Carolina, the club announced Friday. The move will be effective immediately.

“Megan has a track record of excellence throughout her career,” said club Board Member Mark Wimberly, who led SwimMAC’s Search Committee in finding a new head coach. “She sets high standards and has demonstrated her ability to unite coaches, swimmers, and parents, through her personal approach.”

SwimMAC Board President James Meacham added: “We are very thrilled for the opportunity to have Coach Megan lead SwimMAC. Through her innovations she is maximizing swimmers’ instructional engagement, she is a fierce competitor, an excellent leader and a passionate advocate for swimming, we are honored she will call MAC home.”

Oesting enters the position not only anticipating the swimming aspect, but also the opportunity she has to develop young people through the sport.

“I think this is a unique opportunity because SwimMAC is about high performance, but they’re even more so about developing people in order to find that high performance,” Oesting told SwimSwam. “I think that’s what really attracted me to this position. The impact that I have on people’s lives in the sport that I love is going to be magnified, so that’s exciting.”

While Oesting’s official title will be head coach, her duties “will be a little bit different” than what that role has traditionally meant in the past.

“It’s a coach of coaches,” she said. “Typically when a head coach comes in, they coach the senior group, and you hope there’s enough time that it trickles down to everybody else. But coaching the senior group is a giant challenge and it takes a lot of time. So they’ve structured it in a way that I think is really, just genius.”

Rather than take over one specific group, Oesting will oversee all of the club’s groups, 700-plus swimmers, and be engaged during training sessions with all of them at different times.

“Having the head coach have influence over everybody and help raise up excellence in systems, in high performance, in unity and really having a systematic approach with what’s going on in the team,” she said. “It’s a really exciting opportunity and I think it’s unique and I think we all want to be really innovative and push this sport forward with SwimMAC.”

The former UCLA All-American swimmer thinks that this new approach will lend itself to developing a real team atmosphere.

“I think what really can go on in the future is that we can unify under a common vision, but having that get to everybody on the team and build up excellence. The idea is that everyone has the chance to reach their potential in swimming, and the first thing that needs to happen with that is they fall in love with swimming.

“When you offer something that’s dynamic, innovative and exciting, I think that changes the energy of the program and I think that’s really what we’re going for here.”

Back in August, SwimMAC head coach Terry Fritch announced his resignation after just over three years on the job. Eric Lane was named the active head coach effective August 19. Fritch had taken over for David Marsh in February of 2017.

Oesting was named the 2019 American Swimming Coaches Association’s Fitter and Faster Age Group Coach of the Year and, in 2020, was named to serve on the ASCA Board of Directors.

She is the only female currently on that board made up of 15 people, and this hire makes her the first female head coach of one of the nation’s biggest clubs.

In 2019, SwimMAC finished second behind Nation’s Capital in USA Swimming’s Club Excellence Program, which measures the strength of the club’s 18 & under athletes.

“I think it’s a really important position in that, I’m not aware of anybody else in a 700-person club that’s had that kind of influence,” she said on leading this step forward for female coaching.

“It’s a complex conversation. And I think that we’re here for a myriad of different reasons, but the idea that I can be a leader in the swimming community, and I think what people are going to realize is that an emotionally mature, well self governed, intelligent person can come in all shapes and sizes and forms. And yes, there’s probably reasons that it hasn’t particularly come in this form quite yet, but it doesn’t mean it can’t.”

“I try to kind of crack the code on things as fast as I can, and I try to out-coach my competition,” she said. “That’s no different than, I think, what everyone else is doing.

“So yes, I think this is a big step for women in coaching and I think it’s needed. But in my small view, I’m just going to go out there and work as hard as I can, try to be as smart as I can be.”

Wow! That’s like an order for over 500 waterproof headsets! 🤣

Megan is a peer who inspires me everyday to be better. Great hire MAC!!!

Megan is awesome! I hope the board and parents at MAC give her the time, open mind, and Really allow her to succeed.

Congrats Megan. Home run for SwimMac. Megan is a coach who gets it!

A lot of teams can learn from this Head Coach model. Limiting a coaches group number allows more the Head Coach to move around and to be everyone’s coach. When a coaches day is packed to the brim with “Your the Head Coach, so you need to coach these groups”, it limits their ability to manage a site. When I went 3 to 8 with one group after the other, I only really saw maybe 3 out of the 6 or 7 that we had. I didn’t even have time to travel to another site to watch their progress. That meant every meet was a “what do you think is going to happen”. It’s our job to be in a… Read more »

If I’m not mistaken, MAC did it back in the day with Pat Hogan and it was a miserable failure. Knowing Pat, he wanted his full salary and didn’t want really want to “coach the coaches” or maybe there was nothing for him to pass along. Nevertheless, the parent board realized the team was having money problems and Hogan made his exit to USA Swimming so he could give glowing references to pedophiles and eventually get fired.

Absolutely fantastic hire! Megan is the best of the best and will take this program far. Not only is she committed to developing top level athletes, but she has had great success teaching swimmers of all levels to foster a love for the sport. She truly CARES about all of her swimmers. Great hire!!!