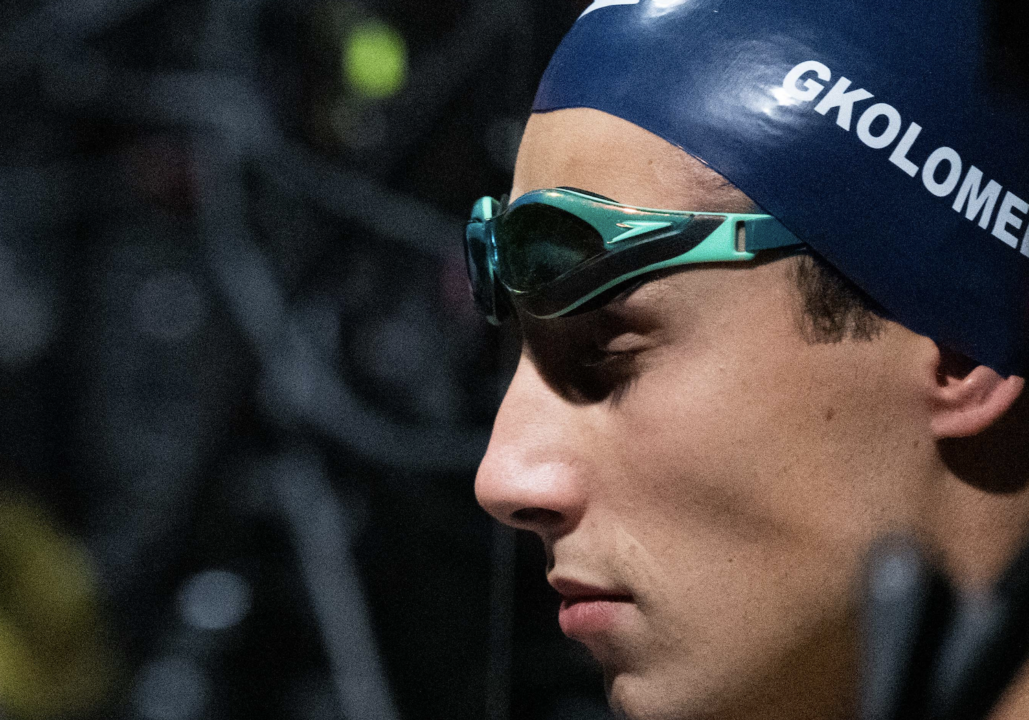 The LA Current should continue to ride Ryan Murphy and pick the backstroke skin race... right? We have a different strategy in this week's specific matchup. Archive photo via Mike Lewis/Ola Vista Photography

We’re on day in to the mega-hyped showdown between three of our top five teams in ISL’s match #5. Here’s five big storyline standouts from today:

1. London Could be World Record Contenders* in Women’s Free Relay

The London Roar lost the #1 (Cate Campbell), #5 (Emma McKeon), and #16 (Bronte Campbell) all-time performers in the 100 free before the season even began. And yet they are still in the mix to put up the fastest time in world history in the women’s 4×100 free relay.

The Roar went 3:27.48 today – that blows away the top time in the ISL this season and falls exactly one second off the ISL record. Energy Standard’s relay from last year’s finale is actually the fastest time in history – but FINA rules require that all relay members be of the same nationality for a relay to count as a world record. (Hence the asterisk * above). So the world record of 3:26.53 is actually slower than the ISL record of 3:26.48. Either way, London has a real chance to challenge the fastest swim of all-time at some point this season. Here’s a look at the splits from today, but also each individual leg’s best split of the season so far in a composite time:

It would only take about half a second for London to pass up Energy’s ISL record, and to go under the standing world record. (They can’t actually break the world record, though, with a mix of two British swimmers, one Russian swimmer and one French swimmer in the mix).

2. Tom Shields Is The Real Deal

It sure seems that every week we’re talking about how good Tom Shields has been in the ISL. The LA Current veteran just keeps on charging every week, and today, he opened the meet by smashing a Caeleb Dressel ISL record in the 100 fly. Shields was 48.94, faster than anyone else in the ISL this year or last. In fact, he’s the first sub-49 in league history.

Shields is just three tenths off his own lifetime-best, set five years ago at the Duel in the Pool. He’s the #3 performer of all-time in the 100 short course meter butterfly. And the way he’s swimming, it wouldn’t be a shock to see him rest down and go after the 48.08 world record held by Energy Standard’s Chad le Clos.

Conventional wisdom would say that the LA Current should play to their strengths in the men’s skin race. The problem is that their strength is everyone’s strength.

Ryan Murphy has won the 50 back skins in both of LA’s meets so far, and he’s piled up an absurd number of jackpot points doing it, scoring 58 and 35 skins points in his two meets.

But backstroke is also London’s best stroke. Guilherme Guido beat Murphy by two tenths in the 50 back today. Christian Diener has the fastest time in the ISL, .04 faster than Murphy’s best. And the Roar lead the Current by 65.5 points heading into day 2.

Murphy isn’t going to get the kind of jackpots he did in week 1 with Guido and Diener in the field, not to mention Tokyo’s Ryosuke Irie. Even if Murphy wins every round, London could outscore him 33-32 if Guido and Diener and be second and third in each round with no jackpots. And that’s not even accounting for the potential that Murphy is upset in any of the three rounds.

If they want a shot at a late-meet Hail Mary, they should pick freestyle, where LA’s Kristian Gkolomeev won the individual 50 free today and London’s Mikhail Vekovishchev and Marius Kusch were 7th and 8th.

This strategy would have several key positives:

There would be two potential source of error in our calculations, though. (1) We’re presuming Rooney can be a pretty good pure sprinter, but it’s possible he’s in the Duncan Scott camp, with great 100/200 endurance, but not enough sheer speed to get past the first round of the skins. (2) LA might not see London as the main competition. With London’s big lead, it’s possible the Current mostly give up on that competition and focus only on staying ahead of Tokyo for second place. In that case, they’re probably better going to backstroke and keeping Morozov out of the mix.

One overlooked aspect of today is how fast Tokyo is starting to swim, particularly in the relays.

Today’s meet featured the top three teams in the men’s medley relay across the entire league this season. So the third-place Tokyo Frog Kings should be getting a lot more credit than they are. Yasuhiro Koseki‘s 56.3 breaststroke split led the field, and Vladimir Morozov was a solid 46.4 at the end of a busy event slate for him today. Tokyo was 3:22.62, and while they didn’t win the event today, they could be legitimate contenders to knock off London in this event next week, or to win it against Energy Standard, Iron, and Toronto in their week 5 matchup.

The Frog Kings were also second in the women’s medley relay. Catie DeLoof‘s 51.8 anchor leg is huge for the Frog Kings, who are notably weak in women’s sprints but might be heating up.

Tokyo was also third in the women’s free relay.

5. DC Finally gets some wins

Last week, we noted how badly the DC Trident were missing event wins. They came up second seven times on day 1 last week, missing out on a huge number of jackpot points by those small-margin second places. The Trident aren’t one of the league’s strongest rosters, but they do have some rising young talent that is outperforming expectations. Today, the Trident got two really key wins.

Amy Bilquist won the 200 back. The former LA Current member was 5th in last year’s season finale in the 200 back. So far this year, she leads the league with a 2:01.29 set today. Her win came by almost a second and a half, and also nabbed three jackpot points for the Trident.

And Velimir Stjepanovic and Zane Grothe tied for the win in the 400 free, an exclamation point at the end of the session for DC.

The Trident are still pretty well locked into fourth place here, and no matter how fast or slow they swim, they’re probably getting the same result for team standings points. But the real goal is momentum: the Trident have a showdown next week with the Toronto Titans. Based on our projections, one of those two teams will miss the postseason. The Aqua Centurions are probably the bottom team, but 8 of the 10 franchises will at least compete in the postseason semifinals. If DC can build momentum and figure out some new lineup tricks this week, they can set themselves up well to perhaps effectively clinch a postseason berth next week by beating Toronto head to head.

Whats up with Fratus? I trained beside him for 2-3 weeks in Florida and he was FAST!!!! Just dont see it in these matches… WHY!!?!?!

Maybe the fight for the last semi final spot will be between Breakers and Trident not Toronto and Trident. I think Titans have a much better roster than DC. Breakers have a tougher schedule than Toronto but still they have the edge against Trident from their last week’s match up.

Very happy for Tom Shields. He works hard and his underwaters are incredible.

And the others don’t work as hard?

Good lord. Can’t someone compliment one swimmer without implying that others suck?