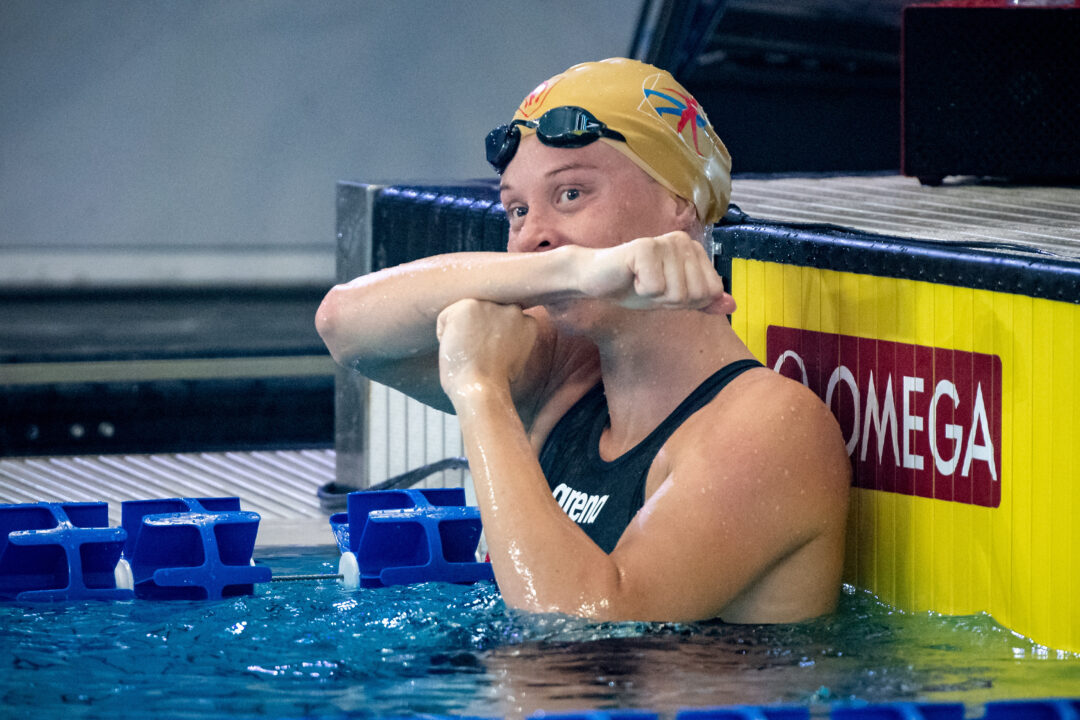 Louise Hansson went from almost not racing the 100 back at SC Worlds to winning the gold medal in what was one of the fastest swims in history. Archive photo via Giorgio Scala / Deepbluemedia / Insidefoto

There was no shortage of incredible swims at the 2021 Short Course World Championships in Abu Dhabi, with three individual world records set, one relay world record tied, and numerous championship records, razor-thin races, and a pair of rare relay dead-heats for gold.

While this onslaught of performances made it tough to pick for this edition of Swim of the Week, Louise Hansson‘s surprise victory in the women’s 100 backstroke gets the nod for a number of reasons.

For one, Hansson says adding the event to her schedule was a last-minute decision, which checks out given that it’s a race she’s contested sporadically in recent years.

Swimming for the Toronto Titans in the ISL, Hansson was never utilized in the 100 back, with teammates Kylie Masse and Lisa Bratton generally taking backstroke duties, while Hansson was the club’s go-to performer on fly.

The 25-year-old has raced the event more frequently in the long course pool, including hitting a best time of 1:00.04 en route to taking sixth at the LC Euros in May, but nonetheless, her drop in Abu Dhabi was one no one could’ve seen coming.

Hansson built her way through the heats and the semis, putting up respective times of 56.41 and 55.85 to qualify first into the final while breaking her national record in the process.

Then, in the final, Hansson went head-to-head with her Toronto teammate Masse, and got the better of her by a razor-thin margin, .02, to win gold in 55.20.

The performance rocketed Hansson up into #5 on the all-time performers list, while Masse’s 55.22 broke the Canadian Record and American Katharine Berkoff (55.40) won bronze in a time that also cracked the all-time top 10.

Individually, Hansson added a silver medal in the 100 fly, recording a best time of 55.10 which ties her for fifth on the all-time performers’ list, and also won bronze in the 50 back in 25.86, lowering the Swedish Record down to 25.83 in the semi-finals.

Amazing how successful she’s been as a backstroker. She recently transferred to Loughborough, didn’t she? How much of an impact did that have on her choice of stroke and events?

And for what it’s worth – she’s got the most intoxicating and inspiring smile in swimming.