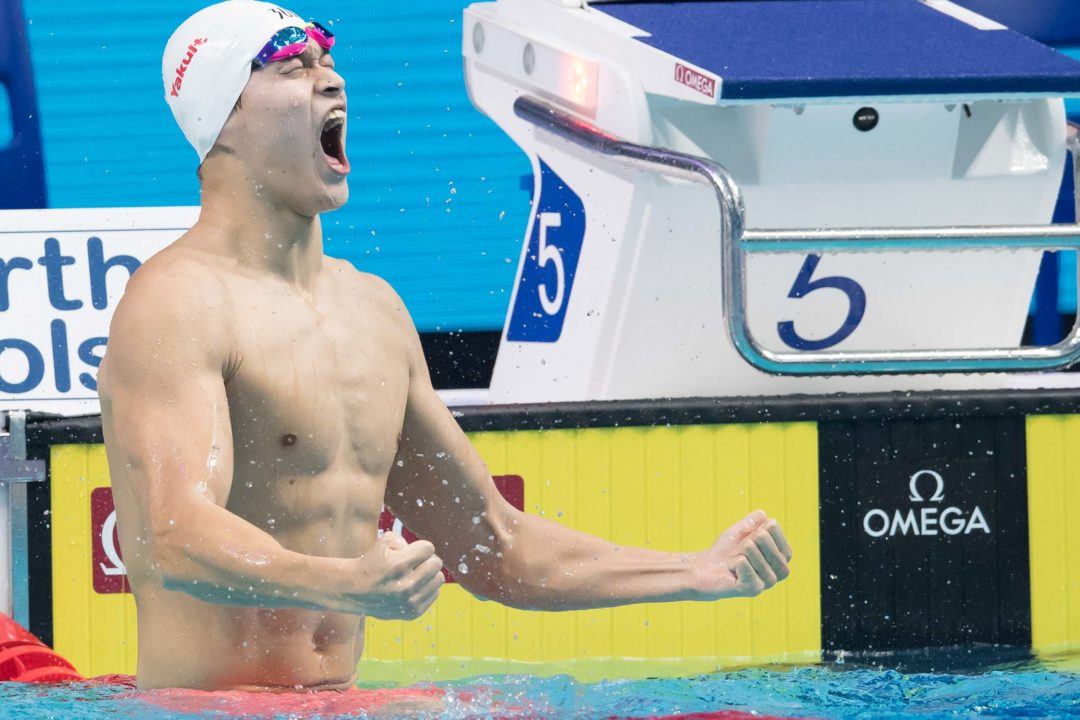 ESPN has named their third annual World Fame 100 list, a ranking of the 100 most popular athletes in the world.

The list, topped by soccer player Cristiano Ronaldo, featured three swimmers, all of whom are Chinese athletes. Sun Yang came in at an impressive 17th, one ahead of MMA icon Conor McGregor, while freestyle sprinter Ning Zetao was ranked 86th and female backstroker Fu Yuanhui was 89th.

Starting with a group of 600 athletes from 68 countries, the list was whittled down to 100 by using three fame factors: search score, endorsement dollars, and social media followers. The search score measures how often a name is searched (Ronaldo was used as the baseline at 100), endorsement numbers were found using various sources such as Forbes, and social media following only indicates the athlete’s most followed account.

It may seem surprising to see three swimmers on the list, while there were no baseball or hockey players included. Particularly Ning and Fu, who are by no means mega-stars in the world of swimming, may be puzzling additions, but their popularity in the most populous country in the world is what got them on the list.

Sun is ranked so high due to his 32 million social media followers, 7th most of anyone on the list, while Ning and Fu rank relatively high there as well with 7.8 and 7.7 respectively. Zetao was the only swimmer featured on the 2017 list at 66th, while Michael Phelps checked in at 46th in 2016 amid his final Olympic bid.

While Ronaldo earned the #1 ranking, followed by LeBron James and Lionel Messi, Floyd Mayweather (14th) had the highest search score at 196 (after his super-fight with McGregor last August). Ronaldo had the biggest social media score with 121.7 million followers on Instagram (though since the list was formed he’s climbed to 126), and James had the highest endorsement money at $55 million.

Sun is a six-time Olympic medalist, including three gold, and also has won nine World Championship titles. Zetao was the 2015 world champion in the 100 freestyle, but hasn’t done much since, and Fu won bronze at the 2016 Games in the 100 back and has four World Championship medals to her credit. She also went viral on the internet in 2016 due to her hilarious reaction to realizing she had tied for bronze with Canadian Kylie Masse, when she initially thought she was 4th.

How is Tom Brady’s endorsements only $6 million? I find that very hard to believe…

Has our main stream sports media failed us in the United States by not having Katie Ledecky on this list?

That’s not why Ledecky isn’t on the list, and it certainly is not the media’s fault.

Any NCAA athletes endorsement score ‘should’ probably be $0

It’s a fame list – not a money list. I’d find it hard to believe Sun Yang is pulling in anything close to a host of top level NFL QB’s, etc who are making over 15 million a year. But he has over a billion people in China as potential fans and “customers”; not to mention that China puts a great deal of focus on Olympic performance and National Pride based on how an individual performs.

Then how come no Chinese divers? More medals than the other two Chinese swimmers!

Swimming, along with track and field, are believed to be hard sports in China. China had relatively less success in the past. While China has produced so many world class table tennis players, divers and gymnasts, a world record holder and Olympic champion in swimming and track/field definitely gains more media attention and endorsement.