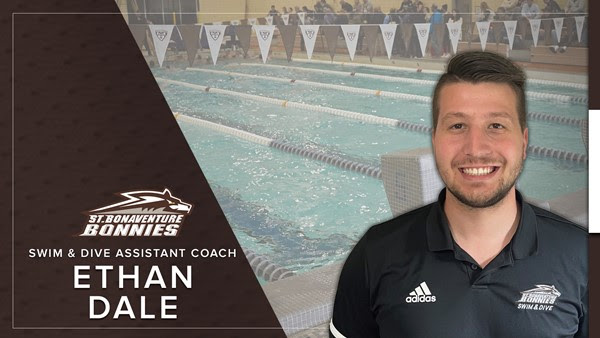 Dale follows Bonnies head coach Mike Smiechowski from Alfred State where he was an assistant there for the past two years. Current photo via St. Bonaventure Athletics

BONAVENTURE, N.Y. – Ethan Dale has joined the staff of new St. Bonaventure men’s and women’s swimming and diving head coach Mike Smiechowski and will serve as an assistant coach during the 2022-23 season.

“We are excited to welcome Ethan to the Bonnies family,” Smiechowski said. “He brings a passion and enthusiasm for not only swimming but student-athlete development that will be pivotal for our success moving forward.”

Dale follows Smiechowski from Alfred State where he was an assistant there for the past two years.

While at Alfred State, Dale assisted in leading practices, provided coaching support for the divers and aided in recruiting efforts. He helped Smiechowski lead Alfred State to three Allegheny Mountain Collegiate Conference/Empire 8 men’s crowns. This past year, he helped coach the AMCC Diver of the Year as well as seven men’s all-conference performers while the women’s team earned Scholar All-America honors as a squad and boasted the conference Newcomer of the Year as well as nine all-conference standouts.

He swam collegiately at Alfred State, receiving all-conference honors. He was a multi-time conference champion in the 400 IM and AMCC Swimmer of the Week honoree. He also was named the team’s MVP. Dale received his undergraduate degree of applied science in architectural technology in 2020.

A native of Lock Haven, Pa., he swam in high school at Central Mountain High.

Along with Smiechowski and Dale, new diving head coach John Sirmon will also lead the Bonnies in the water this year.

Swam against Ethan in college. Great guy and I know he’ll do great things in Olean!