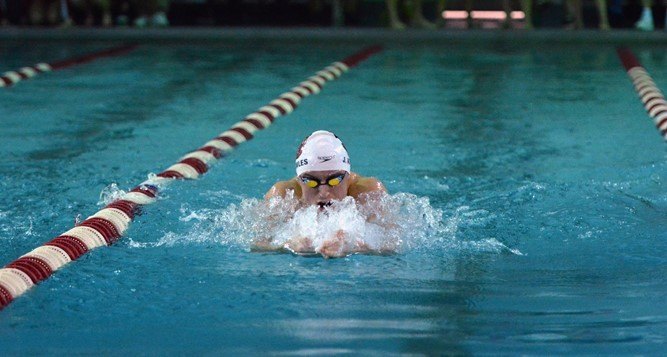 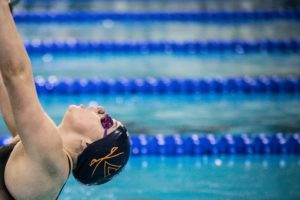 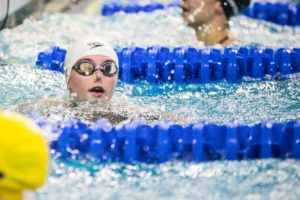 The meet results were tallied using dual meet scoring with the winner of each individual event earning nine points, the runner-up earning four, third-place earning three, fourth earning two and fifth earning one. When it came to relay races, the winning team received 11 points, runner-up got four points and third-place was awarded two.

Friday’s Results
The men and women combined to win 16 of the 26 events. Hertting led the women’s diving team as she claimed the one-meter dive with a score of 276.00 points and the three-meter with 277.35. Sophomore Sarah Schank placed second in both events. She scored 228.38 on the one-meter and 249.98 on the three-meter, which is the sixth-best score in school history.

For the men’s diving team, freshman Isaac Morris won both diving events. He scored 288.92 points to win the one-meter dive and then 302.86 to win the three-meter.

Sabadeanu won the 400-meter IM with a blazing time of four minutes and 42.71 seconds. Senior Allie Pfauth was the runner-up with a time of 4:54.60 and senior Katie Svendson placed third with 4:55.85. Sophomore Hannah Gupton was victorious in the 100-yard butterfly with 1:00.44. Senior Tayler Kirtley and sophomore Taylor Kidd came in second and third with times of 1:02.48 and 1:03.86, respectively. Junior Kathlen Juffer claimed the 100-yard backstroke with 1:00.02. Sophomore Theresa Godlewski was second with 1:00.13 and sophomore Abby Hollub was third with 1:01.83.

The women’s team added one relay win as Schutt, Kidd, Pfauth and freshman Charlie Mechling combined to win the 400-yard freestyle relay with a time of 3:41.12.

The Coyote men were led by freshman Josh Sorbe who won the 400-yard individual medley with a time of 4:19.98 and the 500-yard free with 4:50.97. The team added two more individual wins as sophomore Hunter Padgett touched in first with 1:46.91 in the 200-yard freestyle and junior Steve Wascom won the 100-yard freestyle with 48.40.

Saturday’s Results
The Coyotes won 16 events on Saturday, including the two pool records set by Hertting and Sabadeanu. Hertting won both dives for the second straight day. Her score of 280.58 on the three-meter dive set a Brophy Hall pool record. She claimed the one-meter dive with a score of 273.00. Sabadeanu broke a pool record in the 200-yard backstroke as she touched in with 2:11.18.

The Coyote women won five more events on Saturday. Sabadeanu teamed up with Gupton, Godlewski and junior Kassidie Cornell to win the 200-yard medley relay with a time of 1:51.48.

Sorbe added another win on the weekend as he claimed the 200-yard free with 1:47.14. Senior Adam Fenton swam to a first-place finish in the 200-yard backstroke with 2:00.05. The men also won a relay race as Knowles combined with junior Eric Erlenmeyer, sophomore Jared Thorson and freshman Evan Marsh to win the 200-yard medley relay with a time of 1:37.63.

For the diving portion, South Dakota’s men won both events. Morris won his third diving title of the weekend as he claimed the one-meter dive with 287.78. Senior Brady Saunders took home the three-meter diving title with 283.50.