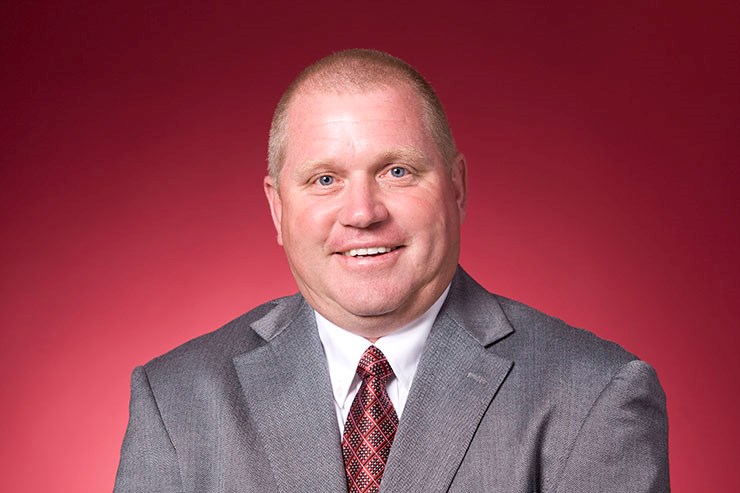 Dale Schultz, who has been at Arkansas since 2016 in his third stint with the Razorbacks, is expected to make the jump to South Carolina. Archive photo via Wesley Hitt/University of Arkansas

Schultz will take over from Todd Sherritt, who had been at the school since 1993. During that time, he was named the SEC Diving Coach of the Year in 1999 and 2017, coached 4 Olympians, 1 NCAA Champion, 52 All-Americans, 15 SEC Champions, and 15 USA Diving National Champions.

A pair of Arkansas divers, Grace Walker and Maha Amer, entered the NCAA transfer portal this week, foreshadowing the move: the 13th and 14th Arkansas women to enter the portal during the 2020-2021 season. Schultz also coached his daughter Brooke at Arkansas. She’s an All-American, the 2019 SEC Diver of the Year, and 2017 World University Games silver medalist in the event. Brooke Schultz should have two years of NCAA eligibility remaining after a redshirt and the extra year granted to all athletes who competed in the 2020-2021 season.

Dale Schultz was hired at Arkansas in 2016, which was his third stint with the program. He was also the diving coach with the Razorbacks from 1989-2000 and 2008-2013. Those stops were intermingled with 2 seasons at the University of Florida, where he was named the 2016 Women’s Head Diving Coach of the Year. He also coached at Purdue, Idaho, and Northern Michigan at the collegiate level.

Last season, Arkansas finished 8th at the SEC Championships and South Carolina finished 11th. At the women’s meet, Arkansas ranked 2nd among all schools with 166 diving points behind only the 191 scored by Texas A&M. South Carolina’s women scored just 18 diving points, ahead of only Vanderbilt, which scored 0. At the men’s meet, South Carolina scored 10 points, which was the fewest among SEC teams. Arkansas doesn’t sponsor a men’s swimming & diving team.

The South Carolina men’s group was hurt by the transfer of Anton Down-Jenkins to North Carolina, where he was named the 2021 ACC Men’s Diver of the Year.

He’s smart to distance himself from Arkansas’s head coach.

Why in the hell would they hire this guy? The current diving coach has way more experience!! Several Olympians. This is like a major step down! South Carolina just blows my mind!

Lol they’re both very, very experienced diving coaches. Your painting of this as a “huge step down” is way off base. At worst, it’s a lateral move, and recently, at the same level of competition, one of these guys has had a lot more success.

Dive coaches aren’t used to having expectations put on them, I guess, but the proof is in the results, and South Carolina struggled last season in diving. If they want to get out of the cellar, the quickest way to do it is to hire a diving coach who can bring 150 SEC diving points with him.

There is an internal investigation going on in AK team

Yeah they had a bad year last year cause a bunch of people redshirted and also it was a Covid year. Since it was that bad they’re counting it as a zeroed out year. Other than that Coach SHERRITT has had a phenomenal diving success. Unlike USC’s swimming program, which is separate from diving. Your prior his diver was fifth place in the US.

Where are those points coming from? His daughter is supposedly staying at Arkansas next year…

He saw the writing on the wall and got out quick

What happened to Todd Sherritt?

He announced his retirement a few days ago on Facebook. Also I believe he just qualified is 5th diver to the Olympics.

Yes, but this was a forced retirement! 25 + years Talk about age discrimination! He literally just qualified an Olympian, and then a handful days later hired the Arkansas coach. Apparently the new swim coach went in there and cleaned house! Several alumni and current athletes are very upset, they’ve been contacting the athletic department all week About the new hire.

An AMAZING diving coach arguably one of the top 5 in the USA. Congrats Dale and Jeff.

14 swimmers and divers transferring from Arkansas?? WHAT is happening there???? I smell a rat….

Not a rat. Bad environment.

coach has to re:recruit his hers swimmers every season cause they can always transfers. then the commentariat will its own conclusions which is the guilty party

Absolutely! Too bad Arkansas doesn’t seem to think he is toxic. He does not believe in “mental health” from what I have heard…

The guy moves around alot

This is huge points for SC. The AD is spending big bucks and it looks like a good investment.

There is questionable stuff between his 3 AK stints