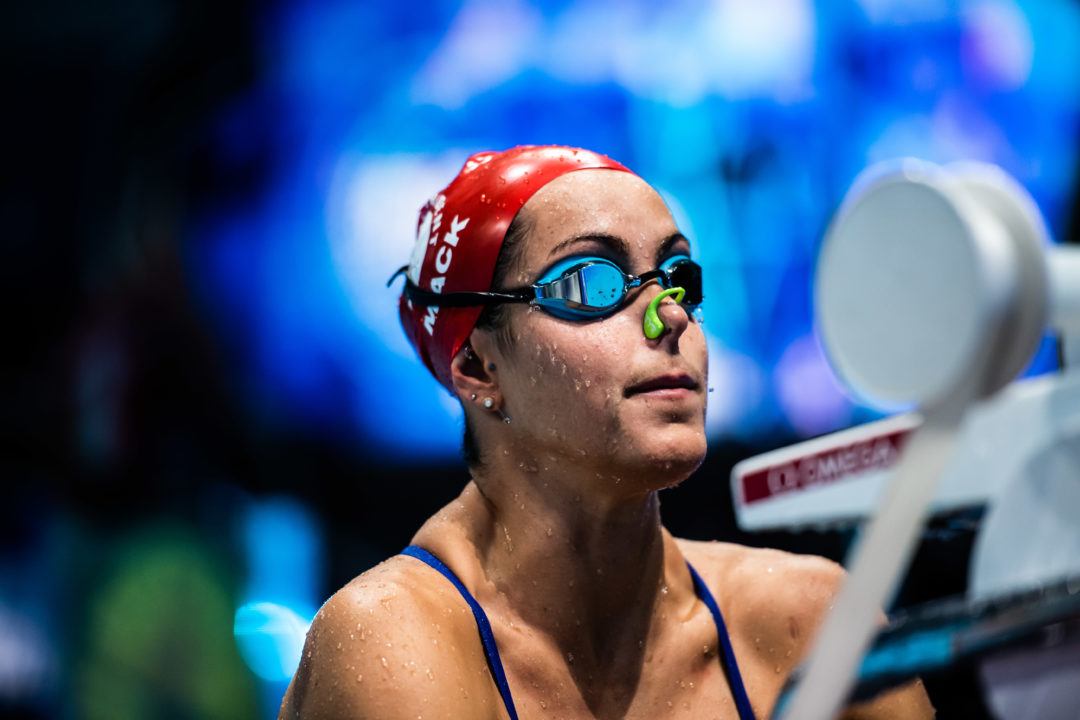 Mack clocked a time of 53.78 to qualify first for the women's 100 free final at the Pro Swim Series stop in Indianapolis. Archive photo via Mike Lewis/Ola Vista Photography

Linnea Mack is peaking at the perfect time.

Competing in the women’s 100 freestyle during the first preliminary session from the 2021 Pro Swim Series stop in Indianapolis, Mack dropped a lifetime best of 53.78 to qualify first for the final, marking her first time under the 54-second barrier at the age of 25.

A former UCLA Bruin in the NCAA, the 2020-21 campaign marks Mack’s fourth season since graduating college. After placing 20th in the 100 backstroke at the 2016 Olympic Trials, Mack failed to final at both the 2017 World Championship Trials and 2018 U.S. Nationals.

Now, Mack appears to be rounding into top form exactly one month out from the 2021 U.S. Olympic Trials.

In Indy, Mack slammed down a time of 53.78 in the 100 free, earning her the first seed for tonight’s final by over half a second.

The performance puts her into a tie for 20th in the world this season, but also ranks her fourth among Americans.

While there are a multitude of women capable of going 53-high that will be vying for a spot on the U.S. Olympic team in the 400 free relay, Mack’s prelim swim certainly puts her right in the thick of the conversation, when previously she would’ve been considered being more on the outside looking in.

It required a time of 53.92 to finish sixth in the women’s 100 freestyle final at the 2016 Trials. Since the beginning of 2018, now including Mack, 10 American women have broken 54 seconds (including the now-retired Margo Geer, who won’t be competing at Trials).

Katie meili had a breakthrough at the same age, bronze in Rio as well as relay gold and silver in Budapest (help the Americans sweep the top 2) with a relay gold as well

And she has the fastest breaststroke split of the medley relay in Rio and she did that in the heats! Truly amazing breakthrough

Love to see this – a breakthrough at age 25. Exciting stuff

Figured she would after a great ISL season