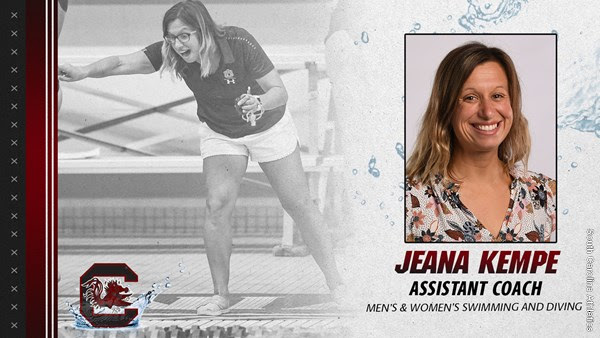 Kempe was an assistant coach with Auburn University for the past three seasons, working primarily with middle-distance swimmers. She had previously coached at LSU, but made the jump within the SEC to join Auburn in 2018 under then-new head coach Gary Taylor.

Taylor and Auburn parted ways this offseason. Kempe and Duncan Sherrard will reunite in South Carolina – they were both assistants under Taylor for three seasons at Auburn. Sherrard was announced as a South Carolina hire earlier this week.

There’s been a lot of coaching movement within the SEC this season. South Carolina’s new head coach is Jeff Poppell, the former women’s head coach at Florida. Poppell made the jump to South Carolina, where he’s heading up the men’s and women’s programs. Here’s a look at Poppell’s staff moving forward:

Patnode comes from a position with Ohio State in the Big Ten. Pinter has previously coached in the Big Ten, but was most recently working with the Gator Swim Club out of Florida.

South Carolina is one of four SEC teams revamping their coaching staff this offseason. Coley Stickels resigned at Alabama midway through the season, with Ozzie Quevedo finishing out the season and Margo Geer taking over next season. South Carolina moved on from McGee Moody in a mutual agreement, hiring Poppell away from Florida to fill the spot. That caused Florida to re-combine its men’s and women’s programs under men’s head coach Anthony Nesty. Meanwhile Auburn replaced Taylor with Ryan Wochomurka as head coach.

Incredible coach, even better person! Congrats to USC on a great hire!!!

Not the last change. ARKANSAS needs to get rid of head coach after the 14 swimmers leaving program and the inside accusations of mental abuse.

This anonymous accusations crap is really pathetic. Some HS swimmers just aren’t cut out for college swimming. And telling them they’ve not cutting it isn’t mental abuse, it’s the truth. This isn’t kids soccer with participation trophies, ffs.

Ok but if ~60% of your swimming roster leaves the program in the same season…either you’ve done a really bad job of recruiting, or you’re the problem.

6
-3
Reply
Time to move along...
Reply to  swimapologist

I don’t think it’s fair to assume that EVERY swimmer who enters the transfer portal wants to leave a program for the same reason (sounds like you’re inferring presumed differences with their coaches?)… how many of the 60% left for academic, health, etc. reasons? I have no skin in the game, but there’s always more to the story…

3
-1
Reply
swimapologist
Reply to  Time to move along...

The first 12 all wrote a letter together saying they left because of the coach. I saw their parents pushing it on social media…

And again, you ever seen (now 14) athletes transfer out of the same program in the same year? Ok 2 or 3 or 4 or 5, explain away however you want. 14? Something’s broken there.

And regardless – if a coach is recruiting THAT many swimmers who are a bad academic fit, have health problems, etc. then they are bad at their job. An SEC head coach’s job is to build a successful swim program that also offsets the football team’s low GPA, in essence. If athletes are leaving at that high of a level because… Read more »

It is the head coach…btw, how is south carolinas diving program? Hmmmm

Believe the portal now has at least 1 AK Diver

Is Kevin Swander not on the staff?

They have announced the maximum 4 assistant swim coaches, so unless he’s going to be a volunteer…

went to an auburn training camp with my team, she was awesome!!!! cant wait to see what she brings to SC!!

Alarming that Poppell would pick 2 coaches from a staff that had so many team culture issues. Hopefully Jeana and Duncan don’t bring the Gary Taylor regime with them.

Yeah, my thoughts as well. I think they’re both good coaches in their own right, but strange to bring two from the same staff when so many things came to light about how negative the culture was.

Culture starts with the head coach. He obviously feels good about both of them as people. Have never heard anything negative referenced about Jeana.

Time to move along & focus your energy toward your new school/program…the obsessive posting about your former head coach is showing us all that you were a large part of the alleged “culture.”

Maybe the coaches weren’t the problem with the culture. I heard “culture” crap during the Brett Hawke era, too.