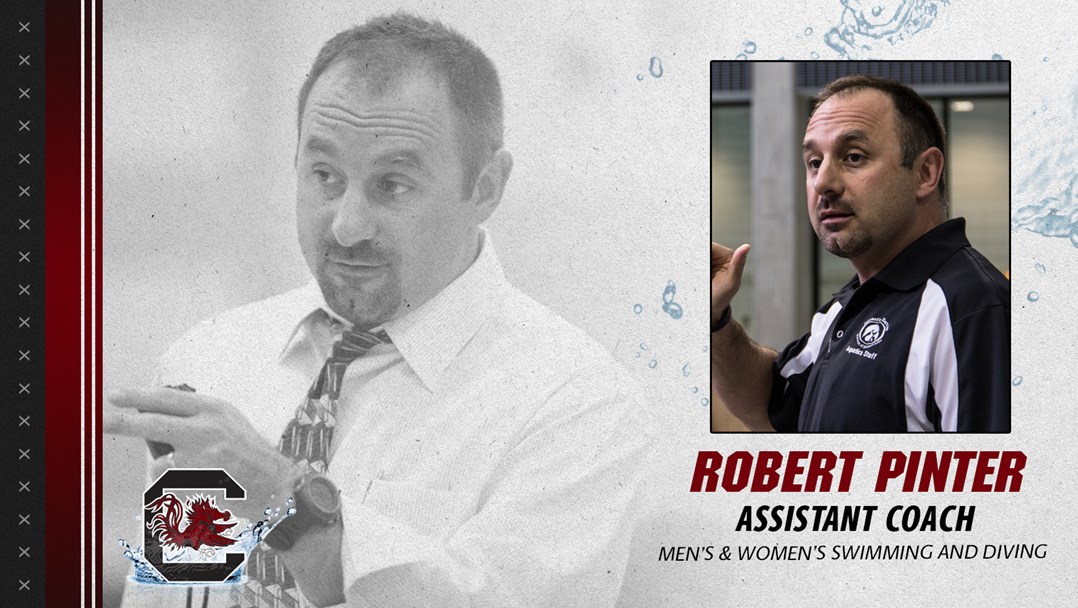 Robert Pinter (above) and Poppell were both on deck at the University of Florida: Poppell working with the varsity team and Pinter with the Gator Swim Club. Current photo via South Carolina Athletics

Pinter has previous stops as an assistant at Iowa, Wisconsin, and Georgia Tech, and since 2016 has served as the head coach of Gator Swim Club. Gator Swim Club is the club program in Gainesville, Florida that is affiliated with the University of Florida. Poppell’s prior stop before South Carolina was as the head coach of the women’s varsity program at the University of Florida.

“I am extremely excited to have Robert join our staff at South Carolina,” said Poppell. “He has developed some of the country’s top club talent in addition to having the opportunity to work with World Swimmer of the Year Caeleb Dressel and 12-time Olympic Medalist Ryan Lochte while coaching alongside former Florida Head Coach and 2012 US Olympic Coach Gregg Troy. It’s not difficult to see the positive impact that he will have on our program in the years to come.”

While many of Florida’s varsity and post-grad swimmers represent the Gator Swim Club in national competition, the team has developed a number of noteworthy home-grown swimmers as well. That includes 2017 US National Champion, Pac-12 Champion, and USA Swimming National Team member Isabel Ivey, as well as US National Junior Team members Caitlin Brooks and Julian Hill.

He also worked alongside former University of Florida Head Swimming Coach and 2012 Head US Olympic Coach Gregg Troy in coaching Gator Swim Club Elite, a group of professional and postgraduate swimmers that include World Swimmer of the Year Caeleb Dressel, who won seven gold medals at the 2019 World Championships and holds world records in the 100 meter butterfly in long course meters and the 50 freestyle, 100 fly and 100 IM in short course meters. Other swimmers in this group include 200 IM World Record Holder and 12-time Olympic Medalist Ryan Lochte, 2021 South American Champion in the 50 freestyle Enzo Martinez-Scarpe, and former Gamecock All-Americans Tom Peribonio and Nils Wich-Glasen.

Prior to his arrival in Gainesville, Pinter was the head coach of the Iowa Flyers where he coached Ruby Martin to a fourth place finish at the 2016 US Olympic Trials in the 200 meter butterfly. He also developed USA Swimming National Junior Team Member Mark McGlaughlin.

Pinter earned a Bachelor of Arts in Political Science from the University of Wisconsin-Madison where he was a four-year member of the varsity men’s swim team for the Badgers. He placed seventh in the 200 meter butterfly at the 1992 Olympics in Barcelona and was a European Junior Champion while representing his home country of Romania.

Congrats Robert! Wish You The Best!

Congratulations Robert…you and Jeff will do great things at USC!

His story about defecting is insane!!!!

Jeff’s first hire is a great choice. Robert is an excellent coach and a 24/7 worker. Florida Swimming will miss both of ya’ll.

Hope some ladies too on the deck….

I’m sure they’ll hire the obligatory 1. This is the SEC, afterall.

I had the pleasure of swimming for Robert. He is quiet but effective, and lushes each athlete individually. A wonderful hire for any team, college or otherwise.

Congratulations Robert, and best of luck in the new gig.

This is a fantastic hire. Robert Pinter is not only a great coach but a wonderful person. Smart move by Jeff Poppell.