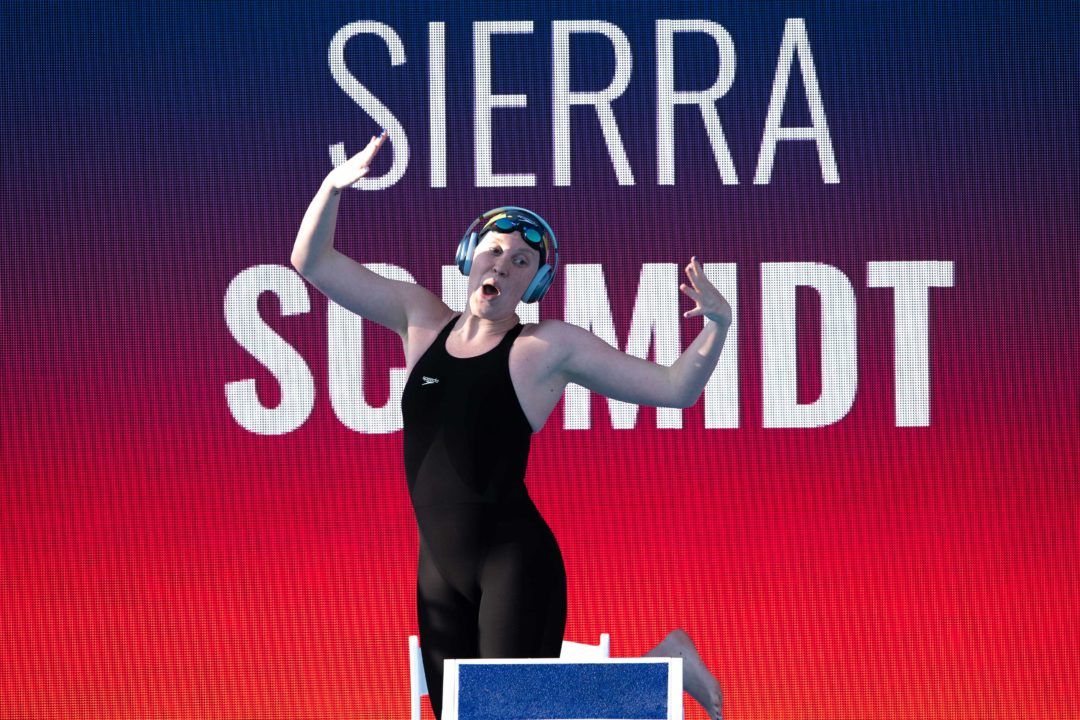 University of Michigan standout Sierra Schmidt has announced that she will be moving to Scottsdale, Arizona to pursue her pro swimmer career. Archive photo via Mike Lewis/Ola Vista Photography

Current US National Team member and former University of Michigan standout Sierra Schmidt has announced that she will be moving to Scottsdale, Arizona to pursue her pro swimmer career.

Although Schmidt trained with Bob Bowman prior to beginning her career at Michigan, she will not be reuniting with him at Arizona State, at least not immediately. Instead, Schmidt confirmed to SwimSwam that she intends to train with her father, Joseph Schmidt, through the 2021 Olympic Trials in June. Afterwards, she will begin looking for a team to train with.

Schmidt was originally born in Scottsdale, Arizona, but grew up in Erdenheim, Pennsylvania. She spent the part of her age-group career swimming with the North Baltimore Aquatic Club (NBAC), Bowman’s former program. Then, during her senior year, Schmidt returned to Pennsylvania and began training under her father, until she committed to Michigan and began to swim under Club Wolverine.

During her NCAA career, Schmidt was a standout for the Michigan Wolverines, earning 6 CSCAA All-American recognitions in addition to being a Big 10 Champion in 2021 as a member of the team’s 800 freestyle relay. At the 2021 NCAA Championships, Schmidt finished 3rd in the 1650 yard freestyle and 4th in the 500 yard freestyle. In the 500 freestyle, Schmidt entered the meet seeded last, but still managed to make the A-final before ultimately placing 4th overall in finals. With her performance, Schmidt jumped 52 places up from her seed.

Prior to her run in the NCAA, Schmidt was an age-group star, representing the United States at various international level competitions. She was a member of the USA Swimming National Team from 2016-2019 and a member of the USA Junior National Team from 2014-2015 and 2016-2017. At the 2019 World University Games, Schmidt won a bronze medal in the 400 meter freestyle, repeating her performance from 2017, and was a prelims swimmer on the USA’s gold medal winning 800 freestyle relay. Schmidt also represented the US at the 2015 Pan American Games, where she won a gold medal in the 800 meter freestyle.

Although she is best known for her swimming success, Schmidt is also widely followed due to her pre-race dance routines. Her performances have earned her the nickname “Dancing Queen.”

Things not good in Ann Arbor? Seems like a strange move so close to Trials

It’s her dad and Bob who both coached her lmao

Why are you ‘laughing your ass off’? What was the joke that made you laugh THAT hard?

They asked why she moved which is funny to me… it’s her dad and her coach there, should be an easy answer.

Because of how bad the OP was, obviously.

IMO her dad is a very good coach. This actually makes a lot of sense. She just graduated. If she needs to move, training under him provides access to high quality coaching that is a known and proven successful option. Much less risky that starting with someone entirely new this close to trails.

Bottom’s pretty much given up on post-collegiate’s. Used to have a thriving group but just a couple of former UM swimmers who decided not to move on currently.

She actually is a current national team member.

It is a bit discouraging but must be admitted that the last paragraph here is problematical. While she has most deservedly earned her swimming success and accomplishment over a long and effective career, she is best “known” in the broad community by a huge margin for her “Dancing Queen” bit.

Driven fans can recognize and appreciate the value of a 52 slot rise from seed in a national level competition. Casual swim fans who happened to see her in a TV meet think ABBA. Her NCAA 500 performance is actually a great justification for the two-tier Olympic Trials format.

it is 2021, those things matter more even to most swimmers than just some numbers, that is life, now learn to live it.

Very surprised she plans to continue to train and swim after trials. I know she is very smart and just thought she would be entering the “real work” world.

She has the rest of her life for real world work. She should pursue her passion a while longer if she wants… the chance won’t come again. Good luck, Sierra.

Totally agree. I never understand the hurry to get to the 9-5 job.

I agree, but on the flip side it could be to start building wealth so you can retire earlier.