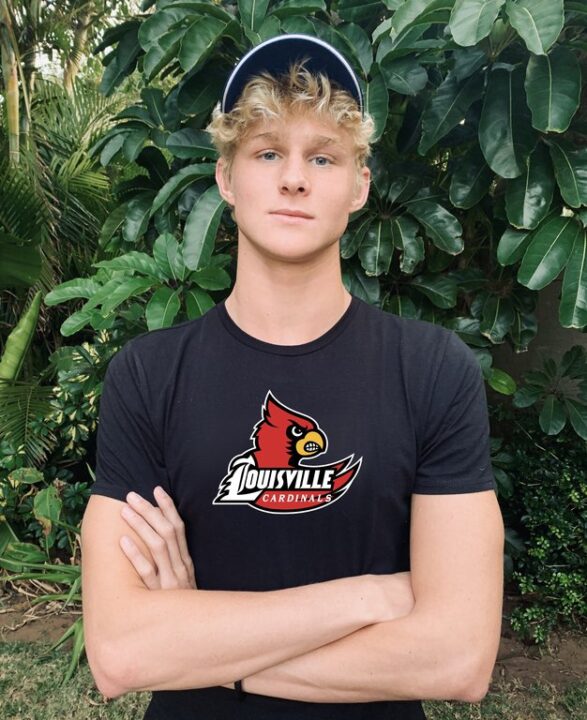 Guy Brooks, a freestyle sprinter from Durban, South Africa projects to be a high-impact commitment for the Louisville Cardinals. Current photo via Guy Brooks

Guy Brooks, a sprinter from Durban, South Africa has announced his commitment to the University of Louisville class of 2026. Brooks swims for Seagulls Swimming Club in Durban, South Africa and will arrive on campus for the 2022-23 season. Seagulls has long been one of the top clubs in South Africa, having produced Olympic gold medalist Chad Le Clos.

At the recent South African Short Course (SCM) Championships in Durban, the 18 year-old Brooks posted best times in the 50 and 200 free. In both 200 he finished in second behind World Junior Record Holder and Georgia commit Matt Sates, touching in 1:45.73 in the 200. Brooks finished third in the 50, posting a best time of 22.01. That 200 free was a 3.8 second drop and his 50 free was a 7 tenth drop. He also competed in the 100 free where he finished second to Sates, though added a tenth from his best time.

Brooks projects to have an immediate impact for the Cardinals when he arrives on campus next year. His current best times convert to already score at ACC’s, with his 50 free projected to qualify for the C final and his 100 and 200 both projected to qualify for the B final. He also projects to be a major player on Louisville’s relays, as all but one of Louisville’s 200, 400 and 800 free relay team members at last year’s NCAA’s were juniors or senior and will have graduated by the time Brooks arrives in Louisville.

The Louisville men had a huge breakout season in 2020-21, breaking into the upper-echelon of NCAA men’s programs. They unseated the six-time defending champion NC State Wolfpack at the ACC Championships to win their first ACC Championship. They backed up that performance at the NCAA Championships, finishing in fifth place just behind Georgia.

Louisville international recruiting is on smoke

Probably some shady practices going on there.

Here’s a suggestion, go watch some race video. It takes almost no effort to see how well Louisville has been prepared over the last ten years. You can watch Kelsi Worrell Dahlia, Mallory Comerford, or Nic Albiero win national championships. You can watch Albiero do the very best kickouts on the last 25 of the 200 fly. Or you can look at a subtlety and see how good Somov is on the kick off of his underwater pullout.

What’s going on at Louisville is the steady rise of one of the very best coached programs in the US.

Just a note, Darian Townsend was produced at Seals Swimming Club just like Matthew Sates. Started there at 6 years old.