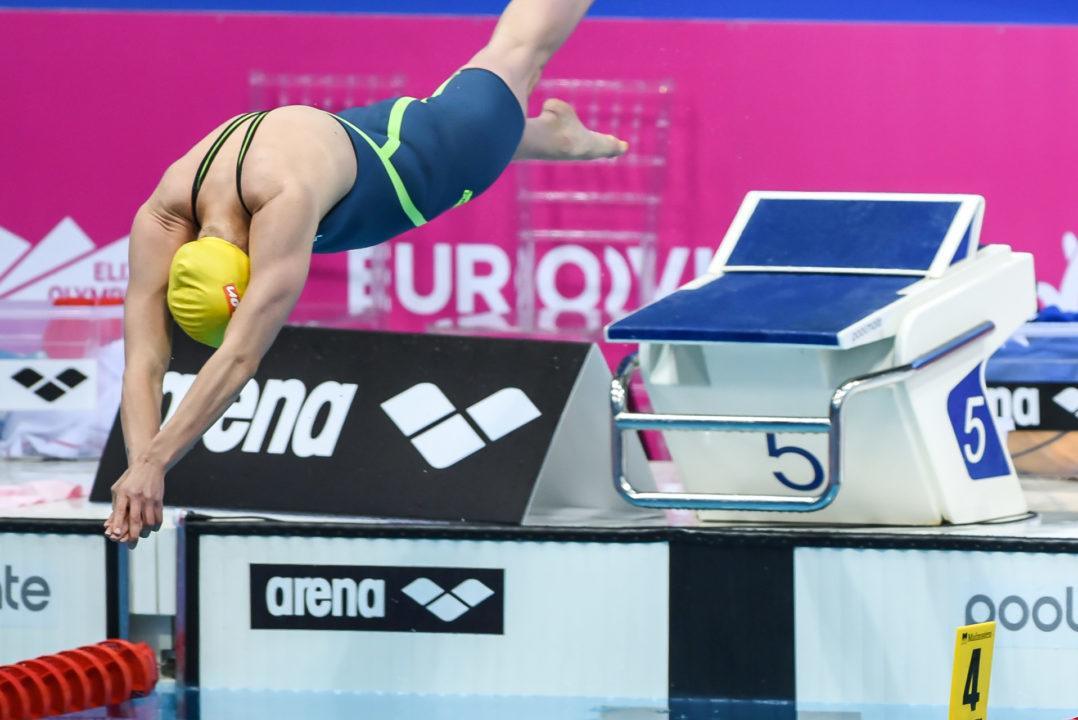 Sarah Sjostrom capped off her monster Mare Nostrum campaign with extra cash in her pocket. Archive photo via Peter Sukenik/www.petersukenik.com

The 2017 Mare Nostrum Tour wrapped up last weekend, with the final stop in Canet wreaking havoc on the record books. Such was the case with the two previous stops of Monaco and Barcelona, where international swimmers took to the pool for additional racing tune-ups with the 2017 World Championships now less than 30 days away.

This year’s prize purse grew to 21000 €, split among the top 8 finishers on the entire tour, based on FINA points. The top man and woman each earned 7000 € for claiming overall their respective series titles. Additionally, the tour paid 750€ for each Mare Nostrum record broken in any of the three meets.

The absolutely unstoppable Swede, Sarah Sjostrom, took the overall women’s Mare Nostrum title, crushing huge swims on each and every stop. Not only did she claim gold throughout her 50m freestyle, 50m butterfly, 100m freestyle and 100m butterfly campaign, but she nailed meet records virtually every time she splashed into a final. Below is a recap of the Olympic champion’s eye-popping efforts, with a grid listing the top 8 women’s finishers:

Exemplifying how important FINA points are in terms of determing the overall Mare Nostrum tour winners, South Africa’s Cameron van der Burgh secured the title racing just 2 events over the course of the 3-stop affair. VDB won the men’s 50m breaststroke at each stop, highlighted by a super swift meet record of 26.99 in Monaco, and a 26.96 clocking in Barcelona. He opted out of the B-Final of the 100m breaststroke at the final stop in Canet, but previously touched in 7th in that race in Monaco with a modest 1:02.30, then claimed silver in 1:00.02 in Barcelona.

Below is a recap of VDB’s finishes with the men’s top 8 finishers beneath:

i would like to see a money table to how much the swimmers made. I think each record is a bonus and then each meet has an overall prize. Sarah must have raked in some bucks!

Someone good at maths help me a bit please. Did Sarah end up with less than 20k after a week of such performance? That’s a joke.

The ones who would have won mefals inc gold at Rio in the series are Sarah , Yuliya , Emily , Katinka & Anton Chuprov .

That is impressive & a nice treat for the spectators .

It is fitting that the two best women swimmer in world are atop the rankings both holding many world top times.

What’s wrong with you “goYulia”? How come you don’t think of Efimova the sole best swimmer in the world any more. Have you change your heart? I hate when people do that.
Maybe if you change your name for “RunYulia” it will help her to be faster. Don’t be selfish. Do this sacrifice for the glory of your Land.

She is greatest at breastroke events, but I have no problem acknowledging greatness from other swimmer except mouth from Indiana.

Of course it’s personal, I am not being paid to comment here just as you aren’t.

The Glorious Motherland just won another election in Georgia . Dems put out a puncy Russian sounding candidate hoping to fool the GOP voters but they saw through it .He’s not a real Russian they said – I want a real Russian or a down- home gal .

Dems also spent $50 million on that race which comes out to about $100 per voter, much of the money coming from outside the state and garnered support from Hollywood. Once again liberals tampering with an election and so desperately wanted to win so they could say the country is turning. The people have spoken…again.

awesome- thanks for the link

That is how the competition should look like. All strokers (fly, brest, back, free) are ahead of IMer. If IMer is ahead it is a strong indication that the competition is week and the meet is of category “junk”.

What is your objection with the IM? Do you not appreciate the graft these athletes put in in order to be the best at all 4 strokes? Besides, the best IMers usually have 1 stroke at world class level so I really don’t understand your argument.

Sean, I understand 400 medley relay where indeed each leg is presented with the strongest stroker in the team. IM competition is something completely different. It is exceptionally rare case (if ever happened) when a swimmer has high rank in all strokes. So in overwhelming number of cases that is a competition of who loses less at weak strokes. So if the field is strong an IMer in general shouldn’t win races besides im competition.
Mare Nostrum was a great meet with the strong field this year. There fore there is no surprise at all that Sjostrom, Efimova, Seabohm and Campbell were ahead of Hosszu. It is a very logical conclusion of such competition. Each of great strokers has… Read more »

Hosszu,s strong stroke is backstroke. She won gold in the 100 back in rio and won silver in the 200 back also in rio. She barely lost the 200 back. And she faced backstroke specialists in both races.

And I don’t think hosszu,s competition in the IM He weak. She,s just far ahead similar to ledecky. IM swimmers come in all categories.

Phelps was primarily a 200 meter butterflyier who branched out to the 100 fly, 200 free and then finally the medley,s.

Lochte was primarily a 200 meter backstroker who branched out to the medley,s and 200 freestyle.

Hosszu has always been a medley specialist who just swam everything just for the sake of swimming, Maybe for fun, until she discovered backstroke was her best stroke.

Carlo, what you’ve said supports my point. Can you imagine Missy Franklin of 2013 vintage with her superb results in backstroke and freestyle competing in IM competition. Same can be said about Sarah Sjostrom. No they don’t do it because the substantial advantage that they have at their primary strokes won’t be even close to cover the difference between 500 something and 200 something rank in breast stroke.

Whatever changes Sarah made to her training and her schedule, it’s succeeding Bigly.

Cate Campbell (and maybe Bronte too) must be shaking her head and wondering if she can be the best anymore in the sprints.

If at Swedish Championships next week Sarah Sjostrom being at hard training (that what she said) goes under 52.5 then the answer on this question becomes obvious.

Cate was 53.0 in Canet (with the worst start ever), that’s an excellent time for an in-season swim! Oleksiak’s stroke did look a bit weird, but that’s just my point of view…

the women definitely outshined the men during the series.