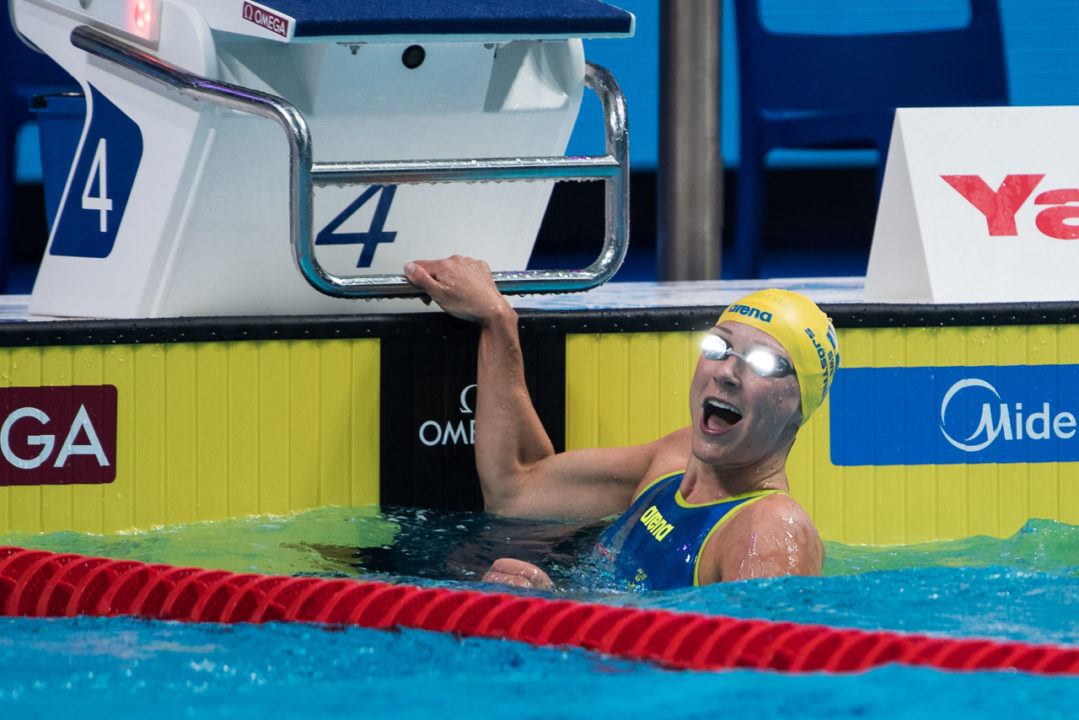 The Swedish Swim Association (Svensk Simidrott) has revealed it initial roster for the 2019 World Championships taking place this summer in Gwangju, Korea.

The roster includes 7 swimmers total, composed of 5 women and 2 men, with additional swimmers potentially being added to the list if they’re able to earn selection times at the Mare Nostrum Series this June.

The women’s 4x100m freestyle and 4x100m medley relays have been included on the Swedish announcement, but no men’s relays will be taking a trip to Korea unless some super swims hit the pool at Mare Nostrum.

At the 2017 edition of the World Championships in Budapest, Hungary, the nation of Sweden finished 5th in the overall medal table, collecting 3 golds and 1 silver medal across the competition. Sarah Sjotrom was responsible for all of the medals, wining gold in the 50m free, 50m fly and 100m fly, while earning the silver in the 200m free.

Michelle Coleman will be joining her, along with Hanna Eriksson, Sophie Hansson and Louise Hansson. The two men on the roster are represented by Simon Sjodin and Erik Persson.

Interesting to see how they will structure the w 4×100 medley relay… Sophie Hansson locked for the breaststroke, but then they have some different combination options for the other legs with Sjöström (fly or free), Hansson (back, fly or free) and Coleman (back or free).

That is why they bring a staff of six, almost one per swimmer, to think all these problems over…

But they also left their idrotts psykolog at home.

Or Coleman-S. Hansson-L.Hansson-Sjostrom.
Coleman and L.Hansson have swum in-season 60″ times in the 100 back, but L.Hansson looking more solid in the fly (57″ low her in-season PB) than in the backstroke, and I slighty prefer the couple L. Hansson-Sjostrom to Sjostrom-Coleman, for fly and free.
Not an easy choice, anyway.

Not so easy that’s for sure. Two supportable possibilities.
Nearly the same as which was earlier, the hen or the egg 😉

As many as France 😁

It is really a curious matter how FINA computes its “medal table”. Having watched the meet avidly via streaming, then seeing this article, the thought arose, “Surely there were more teams who had more than Sweden’s 4 medals”. Checking at https://en.wikipedia.org/wiki/Swimming_at_the_2017_World_Aquatics_Championships#Medal_table, 3 teams – Italy, Hungary & the Aussies – indeed all had more, yet were “ranked” lower on the medal table. Loretta, could you or someone kindly explain how this is computed? Thank you

Preference is given to gold medals over total medals in these rankings. This is why France and South Africa are equal 12th with 2 medals (1 gold and 1 bronze) higher than Japan at 14th with 7 medals ( 4 silver and 3 bronze) and why Sweden is higher than Italy, Hungary and Aus.

This is why they are making at least two rankings normally (3 at the Oympics for points, too), one for total medals and one as you wrote.