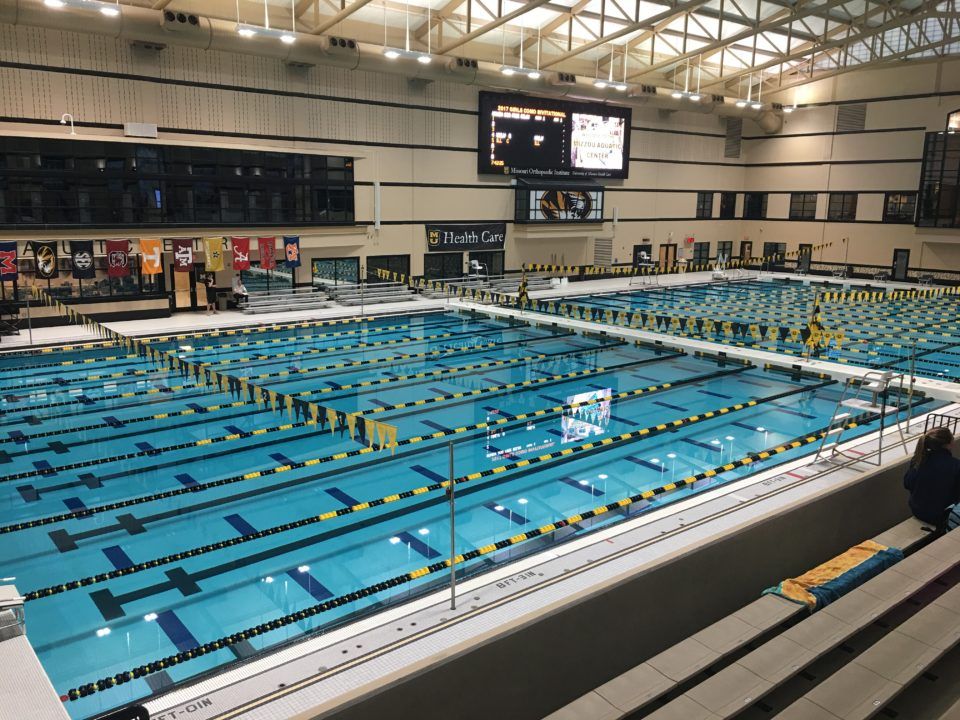 2017-18 is the first year that Missouri high school swimming will be divided into two classes at the upcoming MSHSAA Championships, making the boys COMO Invitational one of the few opportunities for cross-class rivalries to continue and for the top athletes in the state to race no matter the size of their school. The University of Missouri is considered the fastest water in the Show-Me State and the one-day prelim/final format always invites an atmosphere primed for inspired racing as evidenced by the six individual Meet Records and one relay mark that were erased in this year’s meet.

Action began with the defending State Champions and State Record holders, the Cape Girardeau Tigers, holding on for the 200 Medley Relay win against a hard charging squad from Lee’s Summit North. The team of Jacob Bening, Sam Hahs, Brogan Davis and Truman Vines gathered enough of a lead on the first three legs that the blazing 20.61 split form North’s anchor Liam Bresette was not enough.  Cape won the event 1:35.13 to LSN’s 1:35.53.

Bresette, one of the very few athletes in the meet racing in a brief, stepped up to shine in the very next event. The Arizona State commit lowered his own 200 freestyle Meet Record from 1:40.60 to 1:39.68, leaving over two seconds of space between him and the rest of the field. Bresette would later go on to also erase the Meet Record in the 100 freestyle, lowering Reagan Ragsdale’s 46.19 from 2016 down to 45.70.

Recent Auburn commit, Brogan Davis, also lowered two Meet Records, starting with the 200 IM where he reduced Sam Drew’s 2016 mark of 1:52.57 by well over a second while finishing six seconds ahead of the pack in 1:51.33. Later in the meet, the Cape Central standout lowered his own 100 fly mark to 49.09.

Kearney’s Grant Sloan dominated a strong heat in the 50 Free that was loaded with seven athletes below the 22 second barrier. His 21.16 winning time was just shy of his Meet Record 20.91 performance from the prelims.

The sixth individual Meet Record of the night came from St Louis University High’s Barclay Dale who took nearly a half second from AJ Iseman’s 2015 Standard in the 100 backstroke, touching in 51.28 seconds.

Grant Sloan got the record in prelims with a 20.91.