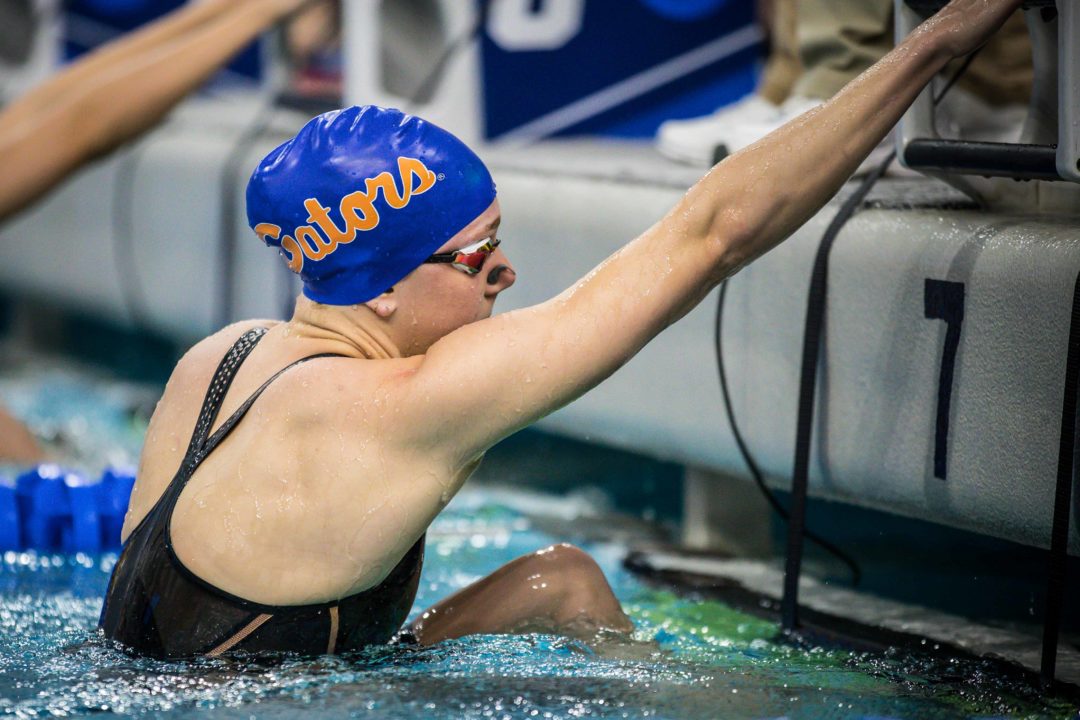 Sherridon Dressel (above) had a breakout senior season at Florida that leaves her as the 2nd-fastest 100 backstroker and 100 butterflier in program history. Archive photo via Jack Spitser/Spitser Photography

The Cali Condors, one of 10 teams scheduled to compete in the 2nd season of the International Swimming League, have had 3 more swimmers publicly announce their intention to swim for the team later this year.

Sherridon Dressel, younger sister of one of the league’s best swimmers Caeleb Dressel, along with Polish nationals Radoslaw Kawecki and Marcin Cieslak are the latest additions.

They join 6 previously announced swimmers to make a group of 9 for this year’s Condors. Teams are allowed up to 32 swimmers on their rosters.

Dressel, like the prior 6 swimmers we’ve written about, just completed her final season of collegiate eligibility, swimming at the University of Florida. Cieslak and Kawecki, on the other hand, are the first announced ‘veterans,’ with both being several years removed from college swimming. Kawecki was a member of the Condors’ roster last year, where he scored 52 “MVP” points in 4 appearances last season, including 14 points at the series finale in Las Vegas. That ranked him 91st in the league in scoring, and 19th among Condors swimmers.

It seems probable based on recent social media posts that both Caeleb Dressel and Mark Szaranek are also planning to be Condors again this season, though neither has been formally announced.

Of the 9 announced names so far, 3 either currently do, or have, trained for Cali Condors head coach Gregg Troy outside of the auspices of the ISL. Adding in Szaranek and Caeleb Dressel would make that 5 Gators among 11 swimmers.

The Condors finished 3rd at the 2019 ISL finale in Las Vegas.

Dressel, younger sister of the league runner-up for MVP last season Caeleb Dressel, was qualified for the NCAA Championships last year in the maximum 3 individual events before that meet was canceled.

Dressel had a massive breakout in her senior year, beginning with best times at the teams’ first few meets in October. Byt he SEC Championships, she had become the second-best time in program history in the 100 yard back (50.64) and 100 yard fly (51.20).

Her long course times haven’t quite caught up to her short course times, but short course (meters, not yards) is the official course of the ISL. She also has some free relay splits that are better than her flat starts in the 50 and 100 free.

While there’s some upside here, and Dressel’s versatility makes her a viable ISL swimmer, there is starting to be a lot of overlap in this Condors roster. For example, if Olivia Smoliga returns to the team this season, they would have a lot of female backstrokers, and with limited roster spots, that could hurt their depth elsewhere.

The 29-year old Kawecki is the only of the Condors’ 9 swimmers announced so far who has ISL experience. He swam for the Condors last year.

In the 2019 ISL season, Kawecki was very good in the 200 backstroke, but struggled to place in the top-half of the other backstroke races. With limited active roster spots for each meet (14 last season), having specialists like Kawecki can handcuff a team’s scoring.

He also struggled as the team’s “B” 400 medley relay leadoff, swimming times consistently slower than the individual – though that wasn’t uncommon, given that the 400 medley relay came in the same session as the individual 200 back in last season’s schedule. He didn’t actually swim the medley relay at the Las Vegas finale, with the Condors using John Shebat in that slot instead.

He was 4th in that same event at last summer’s World Championships as well.

With the addition of Coleman Stewart, a spring backstroker, to this year’s roster, and the amount of versatility that the team is building so far, the Condors are so far better-equipped to offset Kawecki’s specialization this season than they were last.

Another Polish addition for the Condors, the 28-year old Cieslak did not participate in last year’s ISL season.

Primarily a butterflier, Cieslak’s biggest international podiums came last year at the European Short Course Championships, where he took silver as part of Poland’s 200 free relay and bronze individually in the 100 fly.

Early in his career, Cieslak’s future seemed to be in the 200 fly, an event that Poland is well-known for. He hasn’t swum that race in official competition since 2015, however, and has shifted his efforts to the sprint freestyles as secondary events.

He swam a best time in the 100 free in long course at the 4 Nations meet a month ago post-quarantine, and has short course bests in the 50 and 100 free from late 2019 at a non-championship meet.

While he hasn’t swum many best times in long course in the last few years, his short course swimming continues to improve. The challenge for him will be proving he can swim many times in the same season – which is not something that shows heavily on his resume.

If Sherridon ends up being anywhere near as valuable as Caeleb, that would make for some pretty good marketing. Having both Dressel’s on the same team is kinda cool

I thought Kawecki was at the Finale, got third or fourth in the 200 back.

Congratulations Sherridon! What a great addition – I know she puts in the WORK