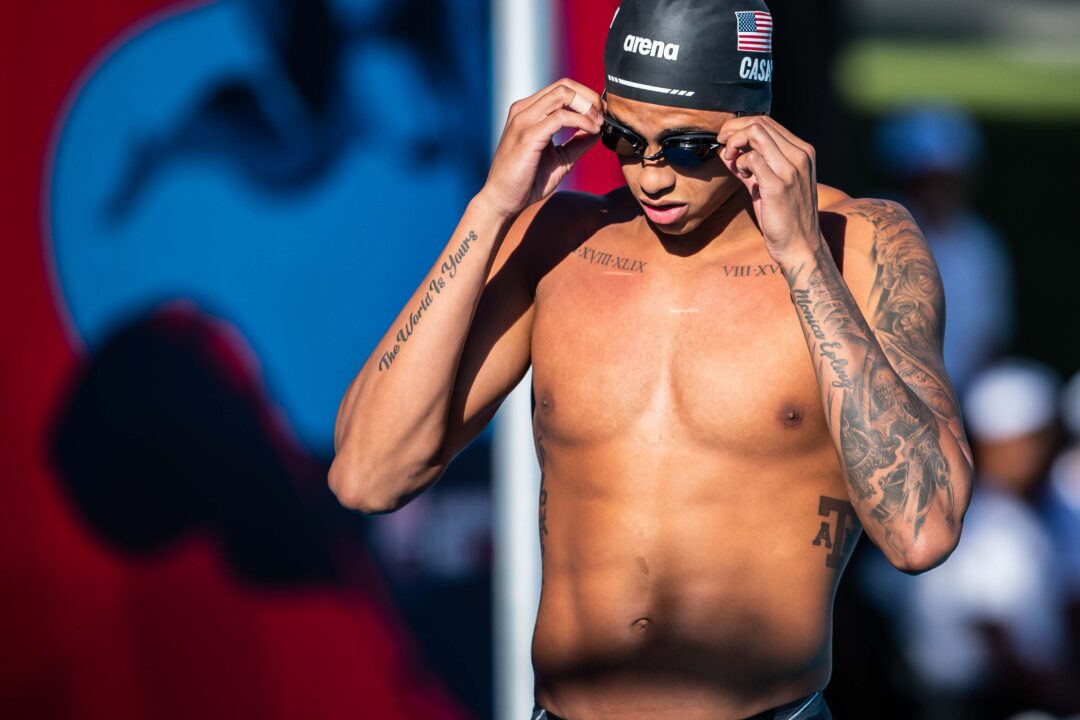 After primarily being known as a backstroker a year ago, Casas is now showing his incredible versatility in multiple events such as the 100 fly. Current photo via Jack Spitser/Spitser Photography

Just a few hours after he “waved a warning flag” with his 26.56 back half split this morning, Shaine Casas went on to swim a 50.40 100 fly tonight, tying himself for third-fastest of all time amongst American men alongside Ian Crocker. In addition, he also ties for the sixth-fastest of all time in the event overall. Casas’ time was faster than what it took to win silver at the World Championships this year.

Casas paced his race completely different than this morning. In prelims, he back-ended his race, opening in 24.48 and closing in a 26.56 that was just 0.11 seconds off Caeleb Dressel’s 26.45 back half from his world record swim. Tonight, Casas pushed the front half of his race more, this time opening in a 23.31 and closing in 27.09.

Previously’ Casas’ personal best was the 50.56 that he swam at Austin Sectionals earlier this month.

Just a year ago, Casas was known to be primarily a backstroker in long course. After making the move from Texas A&M to train with Eddie Reese at the University of Texas, he has began to show off his versatility, having posted elite times in the 100 free, 100/200 back, 100 fly, and 200 IM. However, he is ranked higher in the all-time rankings for the 100 fly he is for any of his other events, including the 200 back (the race where he took bronze at Worlds).

The scariest thing about this is that in Casas’ post-race interview, he said that he wasn’t happy with his time and wanted to go faster. What could his ceiling be?

Ties Crocker’s LEGENDARY 2005 Montreal World Championships 50.40, which Phelps himself considered to be his “worst beatdown” ever.

Rooting for him. I hope he just gets better and better.

Dang!!! I was on the Shane train, fell off, but now I am back on. This guy is amazing

I agree. But who else will? The field never stands still

But, breaking 50 is something Dressel routinely does and even Milak has done.

ayo PVDH, I thought this guy was washed up?

Lemme know when he contributes anything significant to team USA. You’ll be waiting forever.

is a third place in the 200 bk at worlds not significant…? behind ryan murphy…?

He’s already faster than Phelps ever was in the post-supersuit era (2010-16).

the guy called it! a couple of years ago he said “I’m a flyer, it just hasn’t surfaced yet”

looking forward to seeing what he can do!