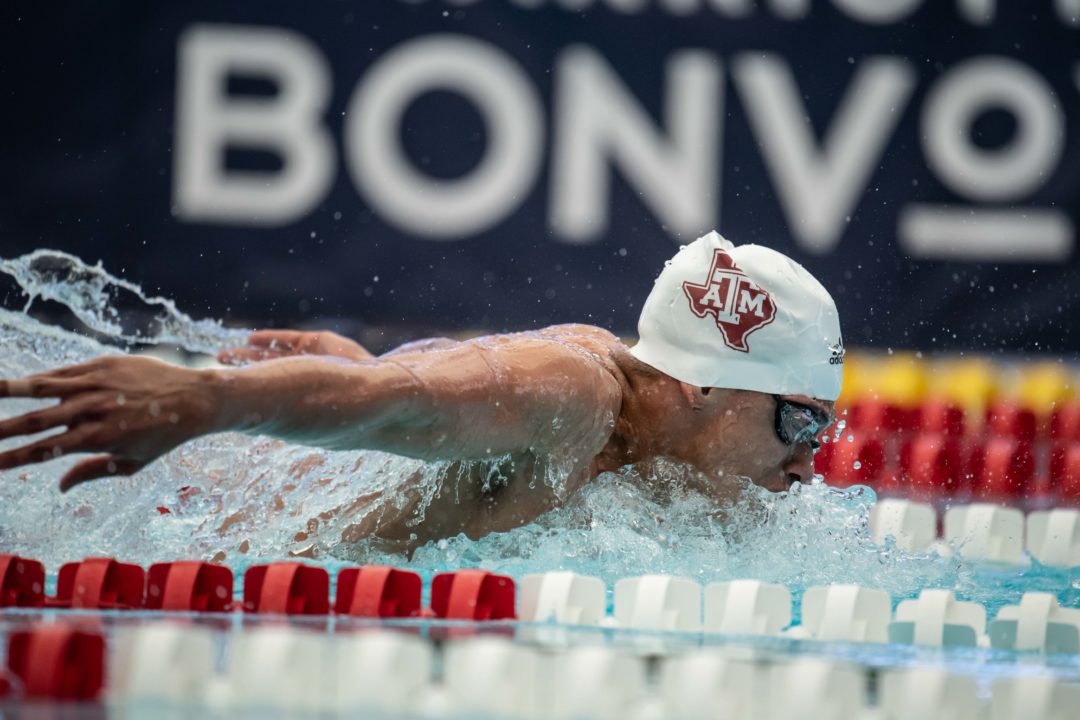 So far, there are a lot of overwhelming favorites, with over 90% of entries choosing the top seed to win in 8 different events.

Anybody who picked against Casas has the chance to make up big ground on the field in the event of an upset.

In that 200 backstroke, he’ll face up against, among others, Texas’ Austin Katz, who was the 2018 NCAA Champion as a freshman and 2019 NCAA runner-up as a sophomore. Katz got off to a slow start this season, and is just the 15th seed coming into the meet.

Katz was still picked to win on 15 entries. Those entries, in general, were very high on the Texas Longhorns’ chances in a number of events, including the team battle.

Entries so far do not have a high degree of confidence in top seeded freshmen.

Those two events, plus another low-confidence-top-seed race the 100 free (Daniel Krueger – 36.70%) all have one thing in common: they’ll be racing against, among others, Cal’s Ryan Hoffer.

In the 50 free, the pick makes sense: Hoffer, the defending NCAA Champion, is an overwhelming favorite with 85.1% of the vote.

He’s also the favorite in the 100 free with 57.3% of the vote, in spite of the fact that the top-seeded Krueger (4th) placed higher at the 2019 NCAA Championships than did Hoffer (6th).

The 100 fly is the most split decision of the meet. Hoffer received 30 picks, Ramadan received 156, Nicolas Albiero of Louisville received 151 choices, Camden Murphy 32, and Texas’ Alvin Jiang, who didn’t race at the 2019 NCAA Championships, received 48 choices.

So, all-in-all, while not as favored as other top seeds, Ramadan has still received more fan votes than any of the other candidates.

The exception to the freshman rule is Texas rookie Carson Foster in the 400 IM, who has been picked-to-win by 91.1% of entries. He is the top seed by 2 seconds over Cal’s Hugo Gonzalez.

The most surprising low-pick favorite to me is Cal’s Trenton Julian, who is only receiving 55.73% of choices to win the 200 fly.

Besides being generally a popular swimmer, he is the top seed by over half-a-second.

The 2nd seed Albiero received about half of the remaining picks (108, 24.8%) – with high confidence driven in part by the Louisville women having a very successful championship meet and moving up a lot in seed.

There’s also more Longhorn love for Sam Pomajevich, who hasn’t had a great year overall but is still the 3rd seed in the 200 fly. Georgia freshman Gianluca Urlando, who before a shoulder injury looked like the American favorite to win the 200 fly at the US Olympic Trials, and Indiana sophomore Brendan Burns are also receiving some action in that event.

There seems to in general be a lack of confidence in favorites in the relays as well (aside from Texas in the 800). That’s because neither of the top two teams in the country overall, Cal or Texas, have top seeds in the 200 free relay (Florida), 200 medley relay (Michigan), and 400 free relay (NC State).

NC State has received just 13.07% of the first place choices so far in the 400 free relay, in spite of the Wolfpack women last week performing very well, especially on relays. The NC State men hold the top seed in that event.

The team battle sees some clear stratifications. It’s clear to most readers that the battle for first place is between Texas and Cal, with a Florida-Georgia showdown for 3rd and the Gators heavily favored there.

After that, as is expected, the opinions become more disparate.  The 7-11 spots between Ohio State, Indiana, NC State, and Michigan are nearly a dead-heat.

Oh man, time to get everything wrong again.

I love how a lot of people probably predicted Kibbler to upset smith in the 500. What a joke.(coming from a texas fan)

You can still go back and edit your picks!

Can’t deny his talent, going to be a force this summer in the big pool.

I would say Finke is a bigger favorite to win the 1650 than Casas is for the 100 back. Casas is clearly the big favorite but with the possibility of a bad start and the 100 back having a higher rate of DQs, I think Finke is more of a lock.