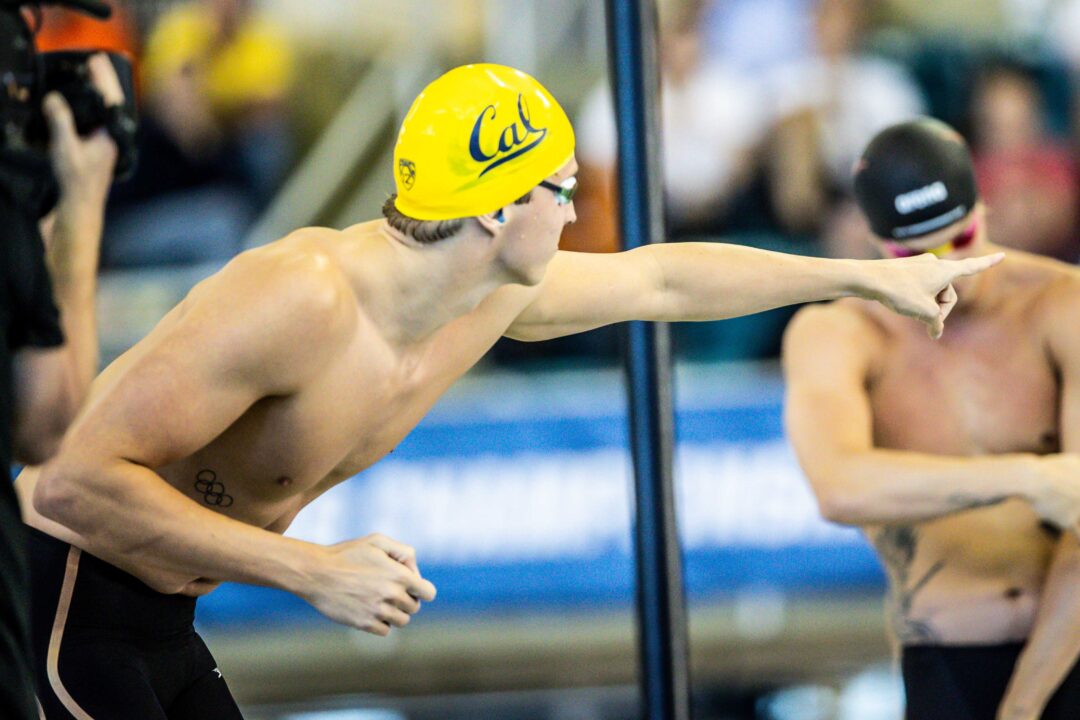 Cal hosted the Utah last week at Spieker Aquatics Complex, sweeping their conference opponent by convincing margins in both the men's and women's meets.  Current photo via Jack Spitser/Spitser Photography

The Cal Golden Bears hosted the Utah Utes last week at Spieker Aquatics Complex, sweeping their conference opponent by convincing margins in both the men’s and women’s meets.

Bjorn Seeliger would go on from the medley relay to win the men’s 100 free with a speedy 42.79. Seeliger was simply dominant, splitting 20.29 on the first 50m then coming home in 22.50. It was Cal sophomore Jack Alexy who came in second, swimming a 44.04. Though he swam exhibition (not for points), Cal’s Dylan Hawk finished third with a 44.50.

With no Seeliger in the individual 50 free, Liam Bell won the race with a 19.86. It was a great swim from Bell, whose lifetime best sits at 19.48, a time which he posted at the NCAA Championships last season. Bell is primarily a breaststroker, though his sprint free seems to be improving considerably since he’s transferred to Cal for the 2021-2022 season.

With no Whitley or Bell in the 100 breast, it was Cal sophomore Jacob Soderlund who took the opportunity, swimming a 54.53 to narrowly touch out teammate Luke Rodarte (54.63).

Jett went on to post the top time in the 100 fly, although he swam exhibition. He swam a 47.65, while Hanson, also swimming exhibition, was second with a 48.09. The official winner of the race was Utah sophomore Marko Kovacic, who swam a 48.66. Utah teammate Evan VanBrocklin was right behind Kovacic, touching in 48.94.

Stadden also led the Cal ‘A’ 200 medley relay off, splitting 24.79. Hers marked the fastest backstroke split in the field by far. Alicia Henry provided a 28.14 breast split, followed by Mia Kragh with a 24.06 on fly, and Gantriis anchored that relay in 22.80. They dipped under 1:40, winning the race in 1:39.79. Jade Neser was slightly faster on the breast leg of the ‘B’ relay, splitting 27.92, but ‘C’ team breaststroker Leah Polonsky was the fastest, splitting a 27.70. The ‘B’ team also saw a faster fly split, with McKenna Stone splitting 23.71, and a faster free split, with Eloise Riley anchoring in 22.60. The ‘C’ relay was anchored by Mazurek, who split 22.45, marking Cal’s fastest 50 free out of the entire meet.

Utah’s Summer Stanfield was the official winner of the 200 IM, swimming a 2:03.57. Leah Polonsky was the fastest swimmer in the field, but swam exhibition, finishing just ahead of Stanfield with a 2:03.25. In a mirror of that race, Polonsky narrowly beat out Stanfield in the 200 fly, clocking a 2:00.52 to Stanfield’s 2:00.59.

Cal didnt even have to go hard and they just went for it. Shoutout Seelinger and Stadden for racing all the time and not just at championship meets.

Stone had a solid fly split

Unless I’m missing it in the article was seeliger suited?

That’s very fast for in season. 19.2, 42.7 individually and 18.9 split. Only a few guys have done that before. Wouldn’t be surprised if one of these guys goes 18.9 in a brief individually. Their certainly on the cusp of doing something like that so it’ll be exciting when that happens.

Does Cal ever suit up before NCAAs?