Phelps Wraps up GP Career on Saturday in Charlotte 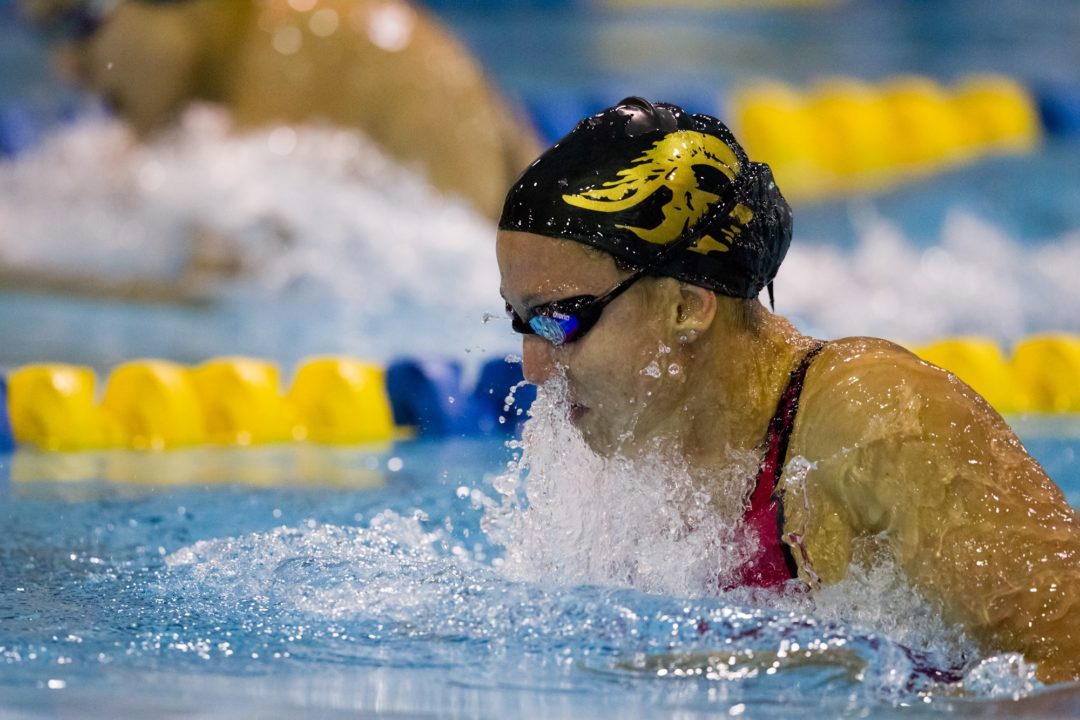 On night 3 of the Ultraswim we saw a top 2012 time from Rebecca Soni and a coming out party for Katie Ledecky. (Photo Courtesy © Tim Binning, TheSwimPictures.com)

Day 3 of the 2012 Charlotte UltraSwim Grand Prix was almost as exciting as day 2, but the shift focused a bit on this day from the established stars to the oncoming stars, as a lot of teenagers stepped up for big swims and big wins. And in a bit of a sad moment for swim fans, the great Michael Phelps ended his Grand Prix career on Saturday (barring a change of heart). He won’t swim Sunday, nor will he race at the final stop in Santa Clara, meaning that his 2nd-place finish in the 200 fly is the last GP swim of his career.

Peng Wu of Club Wolverine played the role of kryptonite, once again, touching out Michael Phelps for the win in men’s 200 fly in a time of 1:56.69. Phelps, who touched 2nd in 1:56.87, had been battling with Sebastien Rousseau for the first 150 meters and as he took over on his signature final wall I imagine he didn’t see Peng, on the other side of Rousseau, making a move as well. Phelp’s final 50 of 30.57 was only outdone by Peng’s 30.09. If you remember it was just over a year ago that Peng broke Phelp’s 9 year 200 Fly winning streak.

Jessica Hardy topped her season best time from the prelims and took the win in the women’s 50 freestyle in a time of 24.83. This time puts her in the poll position in the 50 heading into US Trials. SwimMAC rounded out the top three with Madison Kennedy and Kara Lynn Joyce touching in 25.01 and 25.09 respectively. David Marsh proving, once again, to have that Olympic year touch, as Kennedy and especially Joyce look like new racers since making the move across the country to train with Marsh and SwimMAC. All 3 times are top 25, 2012 marks.

Josh Schneider is now the 2nd fastest American this year. His winning time  in the men’s 50 freestyle of 22.10 is a personal best. Australian, Matt Targett touched 2nd in 22.37 and South African Gideon Louw rounded out the top three with a 22.61.

Should Natalie Coughlin be worried about a 3rd place finish in the women’s 100 back, 6 weeks out from Olypmic trials?  Probably not, but the two ladies who tied for the win in front of Coughlin will walk into Omaha with a little more confidence now. It was the future Cal Bears, Elizabeth Pelton and Rachel Bootsma both touching at 1:00.25 and sharing the top spot on the podium tonight. They are now tied for the 13th fastest time in the world.

Allison Scmitt won the women’s 400 freestyle in a top 5, 2012 time of 4:05.40 but the story of the race is the 2nd place finisher, 15 year old Katie Ledecky. Her time of 4:05.79 makes her the 8th fastest 400 freestyler in the world this year and also makes her a real contender for the 2012 US Olympic team. We’ve seen this coming for a while from Ledecky. She has torn up the age group record books this year, but tonight she made that next step. She mixed it up with the big girls. She brought home her last 50 in 29.91, the fastest split in the race, and with 5 more meters she would have run down Allison Schmitt. No one runs down Allison Schmitt. This 15 year old from Curl Burke is now playing in the big leagues.

Rebecca Soni swam the fastest time of 2012 en route to victory in the women’s 200 breaststroke. In a bright pink Arena suit, Soni clocked a 2:22.22. That time is half a second faster than her time in Austin earlier this year. Micah Lawrence continued the awesome night for SwimMAC by posting the 10th fastest time of the year, 2:24.62.

Eric Shanteau is now tied for the top American time in the men’s 200 breast this year. His winning time of 2:09.72 ties him, with Clark Burckle, for the 6th fastest time in the world this year and was a Ultraswim meet record. Brenden Hansen finished 2nd in 2:11.74.

That Katie Ledecky is amazing.
I think she’s the fastest ever 15 yo over 400 free, and she’s at that age bracket where she will be making a huge improvement.
Watch out world!
Is she this generation Janet Evans? Let’s hope so.

How much tall is Katie?

Ddias, Thanks for the info! I totally forgot about Shao Yiwen. She was born on 10 March 1995, and this means she was already at least 15 years and 9 months by the time of Asian Games (November 2010). (note: although another similar sounding chinese swimmer, Ye Shiwen was still 13 yo when she busted those 2:09 and 4:33 during that asian games). Shao Yiwen failed to final last year at Worlds, due to her inexperience (she finished 10th in both 400 and 800 free. She improved a bit during the Chinese Nationals in September, but she swam slower this year during their olympics trials. Let’s see if she can still improve in London, and does not become another chinese… Read more »

My bad, i dont know where i found she is 13!Probably because i got mixed seeing another absurd result from other 15 year-old chinese girl: XinXin made 8.22.76 this year in 800 free at chinese LCM nationals.What absurd time!

not sure how or why, but I believe Ledecky’s birthdate is March 17th, 1997 (15yr/2m). That makes her 5 days older than Australia’s Remy Fairweather, who until now was ‘trading’ pb swims with Ledecky. These times are monstrous, and I suspect we’ll see her in London.

Yes! Great job Katie – can’t wait to see what you do in Omaha

I think Katie’s coach Yuri deserves at least a mention in this article. Very quiet and humble guy, but has done a terrific job planning Katie’s year with calculated meet choices and not rushing the process for his personal ego.