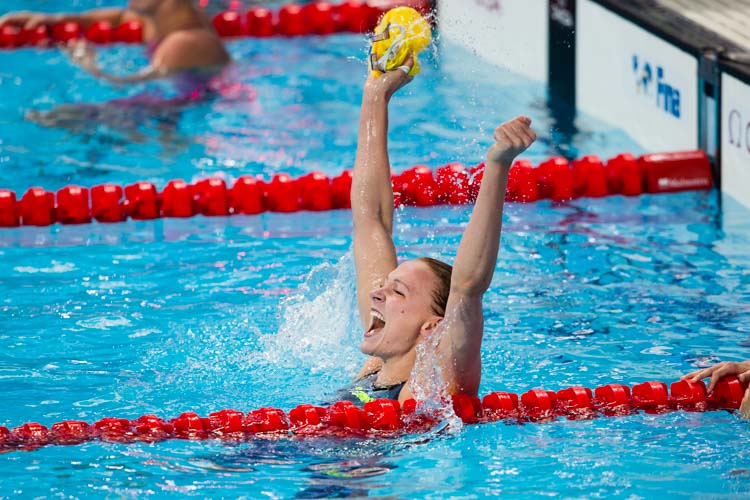 Sarah Sjostrom of Sweden re-broke her 55.74 world record that she set earlier in the meet with a time of 55.64 in order to touch in for her third 100m fly world title. Current photo via Tim Binning/TheSwimPictures.com

Sarah Sjostrom of Sweden re-broke her 55.74 world record that she set earlier in the meet with a time of 55.64 in order to touch in for her third 100m fly world title.

Sjostrom led the race at the first 50 wall with a time of 26.17, but really pushed ahead of the field on the second 50. Splitting a 29.47 on the way home, Sjostrom solidified a golden performance.

In order to win, Sjostrom took down Danish rival Jeanette Ottesen. After the race Ottesen told on-deck reporters that, “she [Sjostrom] was just so fast.”

Ottesen ended up finishing second in 57.05, touching 1.41 seconds behind Sjostrom. With that distance between them, Sjostrom won the race by the largest margin in World Championship history.

This is Sjostrom’s third world title in the 100m fly following her 2009 and 2013 victories. Just like in 2009 and 2013, Sjostrom managed to speed up from prelims to semifinals and from semifinals to finals. In 2009, she had a very similar performance breaking the world record in semifinals and then re-breaking it in the final to win gold in 56.06.

A message to the Campbell sisters. Sarah is coming for you in the 50m/100m Free!