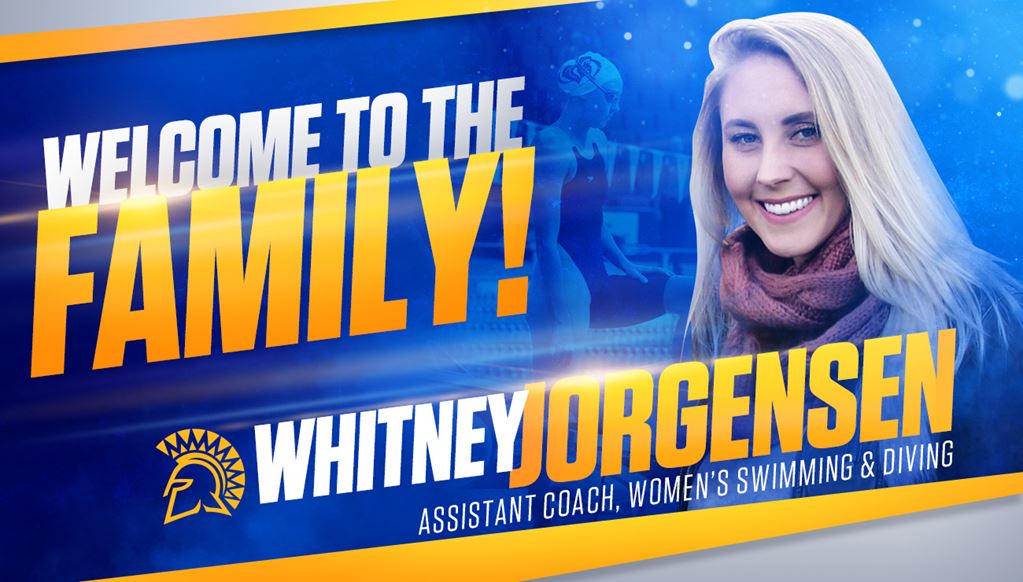 Jorgensen, who had been coaching with the Sierra Marlins Swim Team, will be taking on her first collegiate coaching position. Archive photo via San Jose State Athletics

When the new season begins this fall, the San Jose State women’s swimming & diving program will be sporting both a new 50-meter pool and a new assistant coach, the latter of which was made official on Tuesday with the announcement of Whitney Jorgensen as the program’s new second-in-command. She’ll replace Christa Prior in that role; Prior had been the team’s assistant for the previous 3 seasons.

“I have known Whitney for many years, first as a dominant athlete and more recently as a coach,” SJSU head coach Sage Hopkins said. “Whitney’s name immediately came to mind when our assistant position opened, and she was my first call. Her commitment to the academic and personal growth of our student-athletes, coupled with her fierce, competitive spirit makes her an awesome fit for our program.”

Jorgensen was an all-conference swimmer at both Boise State and the University of the Pacific, including a 3rd-place finish as a junior at the MPSF Conference Championship meet in the 200 IM. She was also a 2016 US Olympic Trials qualifier, and she remains the school record holder in both the 200 breaststroke and 200 IM.

Since graduating from Pacific in 2017, she’s worked in several positions, including as an intern within their athletics department, as well as other roles outside of the realm of sport. Her biggest coaching experience comes from serving as the assistant age group coach and head masters coach with the Sierra Marlins Swim Team since February of 2018.

“I could not be more excited to become a part of the Spartan Family,” Jorgensen said. “Swimming has been a passion of mine for the past 19 years. I am overjoyed to have the opportunity to continue in a sport I love by becoming the assistant swim coach. I look forward to working with these athletes alongside Coach Hopkins, and I have a great feeling about this season.”

The Spartans, who have been training at off-campus facilities while their new pool was being completed, finished 8th out of 10 teams at the Mountain West Conference Championships in 2019. That was their best team finish since 2016.

Details for Jorgensen’s contract were not immediately released, though her predecessor made just over $56,000 in the position in 2018.

How does someone with less than 2 years of coaching experience get a full time assistant position? Asking for a friend.

I disagree with your statement that it is easier to get a coaching job as a women is completely ungrounded. Recently, NCAA gave swimming an F for D-1 diversity among coaches when it found women made up only 17.9% of head coaches. Sure, I get it the study is for head coaches but I am sure one of the reasons for the lack of representation is the on the assistant level. Also, hiring younger coach does have its advantages. Maybe a coach who is entering his 14th season with a program wants to higher someone younger on staff, who knows.

Because no man was ever offered an assistant role with the same level of experience? You have to be kidding – that comment is an example of the bias that reinforces why women struggle to find coaching roles at the collegiate level. Everyone gets a break at some point, and and I’ll bet if swim swam ran the numbers there would be a TON of male assistant coaches hired with that level of experience.

Maybe she rocked the interview, maybe she has the right background and and training philosophy, maybe she really connected with the athletes, maybe she was the only one willing to work in a high cost of living area for that salary?

See my extensive list of these men below. You are 100% correct.

1) Your list of ‘men’ is completely meaningless without knowing who else was applying for the job.

2) Who you know is infinitely more important than your gender. For instance, Cory Chitwood had Frank Busch backing him.

And we don’t know who else applied for this job either. The comment above implied all you have to do is be a woman to get a job. My post demonstrated that plenty of men with thin resumes have gotten similar jobs.

Read the connection that Sage gave – he’s known her for years. Connections matter. She is a very hard worker who swam at a high level, and coupled with her dynamic personality, she will do a great job as an assistant coach with Sage. Tracy Ducac was hired at Texas A&M in 2006 with limited coaching experience, but she was the right fit for the program (strong desire to learn, personable, intelligent) and she’s done just fine. If the salary is in the mid-50,000 range in that area, it will be a younger coach without a load of experience. I am guessing SJSU swimming will be even better over the next few years with Whitney there.

Well, if your “friend” can’t muster the initiative to post their own inquiry, anonymously, on a public competitive swimming website, the parameters addressed in your question are secondary to their apparent inability to secure such a position.

Yeah they all got entry level jobs with little experience. Whats your point? I suppose if they were made associate head coaches at 100K+ salary it would be suspect. They were likely all “low man on the totum pole” when they started. Jorgensen is 2nd in command per the article but likely with their program no one is beneath her either.

It’s a women’s only, mid-major program, so they are only going to have one assistant. She’s not associate head coach, and she’s making 50k just like I’m sure many of these men were as assistants. I’m comparing apples to apples.

I know the starting salaries of two of the men on that list, and they were less than half of $50,000.

Ironically, I feel that half the negative comments in this conversation are due to her making a starting salary of 50,000. I think people fail to realize the cost of living in the Bay Area and how salaries are adjusted, in accordance, when you live in a market like out here.

Everyone should also note that we don’t know she’s making 50k. That’s what her predecessor was making in year 2.5 of her time there. If I recall, it was mid-40s in 2017.