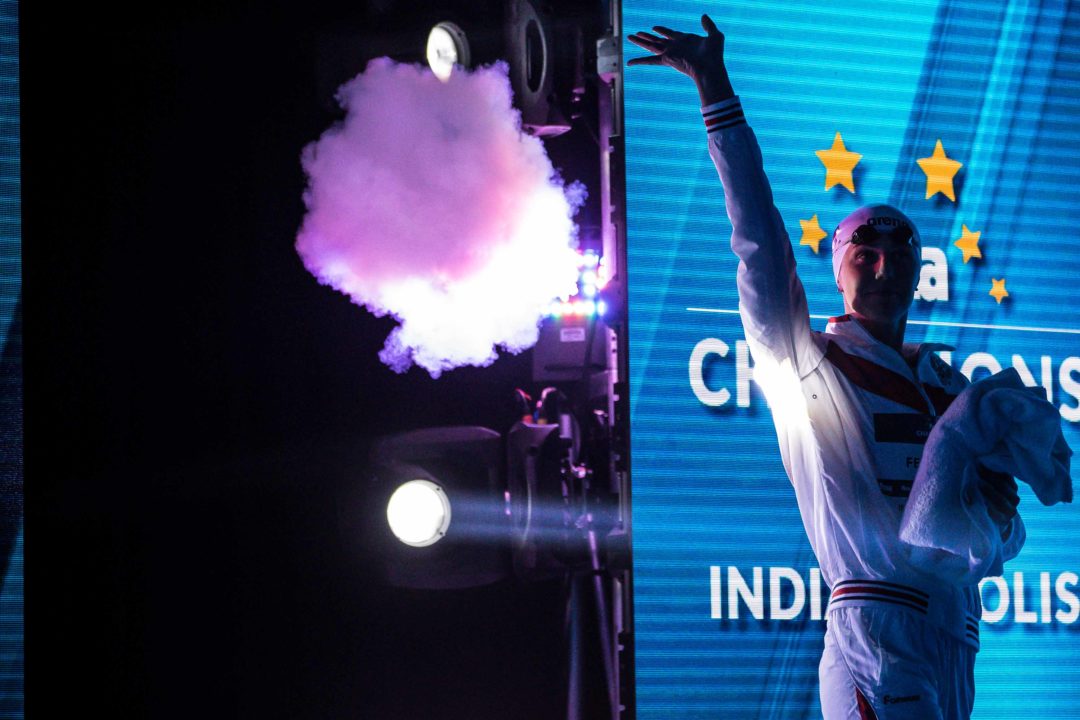 Russian swimmer Anastasia Fesikova has shared more details about the shoulder injury that forced her to withdraw from the 2020 ISL season. Archive photo via Jack Spitser/Spitser Photography

Anastasia Fesikova has shared more details on the injury that forced her out of the International Swimming League season, and World Champion Vladislav Grinev has announced his planned return to racing among a slew of news coming out of Russia this week.

For the 30-year old Fesikova, who is a captain of the Russian National Team, her return to racing after quarantines will not be until the Russian Short Course Championships in St. Petersburg in December.

That means she’ll miss the Russia Cup next weekend in Obninsk and the Russian Long Course Championships in Kazan.

Fesikova explained that her absence is due to a shoulder injury resulting from a tearing of the head of her biceps that caused damage to ligaments and tendons as well.

“A doctor in Germany was planning for an operation, but we decided not to pursue that – I would not have recovered in time for the Olympic Trials (in April),” Fesikova told Russia’s RSport news outlet. “Doctor (Sergei) Arkhipov told me that I can go on without the operation. As a result, I underwent a course of treatment, and there has been less pain. Before that, even in everyday life I couldn’t lift a pot. I started swimming with my arms only 2 months ago. While I’m swimming freestyle, I can’t swim on my back for more than 100 meters – there is more load on the shoulder area (when swimming backstroke). So, for now, we decided not to force the return and will skip the first meets back.

“Apparently the injury was old. Sometimes there was pain, but I rested and everything went away. But the quarantine was training only on land. There was a lot of load on the arms, which is unusual – in pushups, for example. My coach says, the arm would have survived until Trials in April and the Olympic Games if I had been selected and they were held this summer, but everything turned out differently.

“I swim and train, but so far I cannot do it to the fullest,” she said.

Fesikova, formerly known as Anastasia Zueva before marrying fellow elite swimmer Sergei Fesikov, is a former World Record holder in both the 50 and 100 meter backstrokes. In 2009, she was the overall winner of the Mare Nostrum Tour.

While many of her accomplishments happened during the polyurethane ‘supersuit’ era, her success has carried beyond that as well: at the 2011 World Championships, she won gold in the 50 back and silver in the 100 back. More recently, she was the 2018 European Champion in long course in the 100 back.

Fesikova was announced originally as a member of the Toronto Titans, but has since withdrawn from the season because of the injury.

2019 World Championships bronze medalist in the 100 free Vladislav Grinev is scheduled to swim his first races of 2020 at the upcoming Russian Swimming Cup in Obninsk.

His coach, Vladimir Nutsubidze, told RIA Novosti that he plans to race at both meets and the Russian. Grinev is not signed up to an International Swimming League team this season after swimming at one meet for Aqua Centurions in 2020.

“We are in a fighting mood,” Nutsubidze said. “Vlad’s approach is normal: we train, we work. We are getting ready to perform at all competitions that will be held.”

Grinev was named the 2020 Russian Soldier of the Year in the category of Best Active Russian Athlete in an Olympic Sport.

Previously just a distance specialist in the pool, she is now hoping to qualify for the Tokyo Olympics in both the pool and open water swimming.

In her plans she has the right man leading her: Frenchman Philippe Lucas, who trained Sharon van Rouwendaal to an Olympic gold medal in the 10km open water swim in Rio in 2016. While training for open water, van Rouwendaal was able to maintain pool success as well – a year earlier at the 2015 World Championships, she took silver in the 400 free in the pool.

Kirpichnikova was connected to France by Anna Egorova, who in November of 2018 offered her the option. At first, she says, she declined the chance, but eventually came around.

Now she trains with both Egorova and Lara Grangeon – another of the more successful pool-open water dualists – she finished 4th in the 10km swim and 3rd in the 25km swim at the 2019 World Championships.

Kirpichnikova says that the move of the Olympic Games to 2021 was helpful to her, as she would not have had the opportunity to qualify in open water in 2020.

She says that she will try to race the 800 and 1500 free at the Olympic Games via April’s Olympic Trials.

Kirpichinkova has spent the last year training alone at the Krugloye Lake Base without a coach.

She is back in France training, and plans to take part in their National Championship meet next week in open water, swimming the 5km, 10km, and 4x1250m events. She says that she plans to return to Russia for the Russian Long Course Championships, assuming she’s able to make the trip with ongoing coronavirus restrictions.

To earn a spot in Fukuoka, Japan, where the final Open Water Olympic Qualifying Event will be held on May 29th and 30th, Kirpichnikova will have to again prove her form in a later race. An agreement with the senior coach of the national team Sergi Burkov will allow her to do so via the 5km French National Championship race in Eilat.

Russia’s highest female finisher in open water in the 10km event at the 2019 World Championships was Anastasyia Krapyvina, about 37 seconds behind the leaders.

Three-time Olympic medalist Yulia Efimova wants to fly to Russia to compete in the national championship, but her representative Olga Eliseeva to RIA Novosti last week that it is difficult to plan everything because of ongoing coronavirus restrictions.

Russia is holding two National Championships in the waning months of 2020: one in October in Kazan in long course, and the other in December in St. Petersburg in short course.

Efimova, who is based in Southern California in the United States, has not swum any official races since the 2019 World Championships.

Efimova is not eligible to participate in the International Swimming League because of a 16-month suspension she received in 2014 for testing positive for a banned substance. While local club meets have resumed in the US, there has been very little in the way of elite meets happening, with the next national-caliber events being the Pro Swim Series stops scheduled for November.

Efimova is the two-time defending World Champion in the 200 LCM breaststroke, part of 6 individual long course World titles. She also has 3 Olympic medals, including 100 and 200 meter breaststroke silvers from the 2016 Olympic Games.