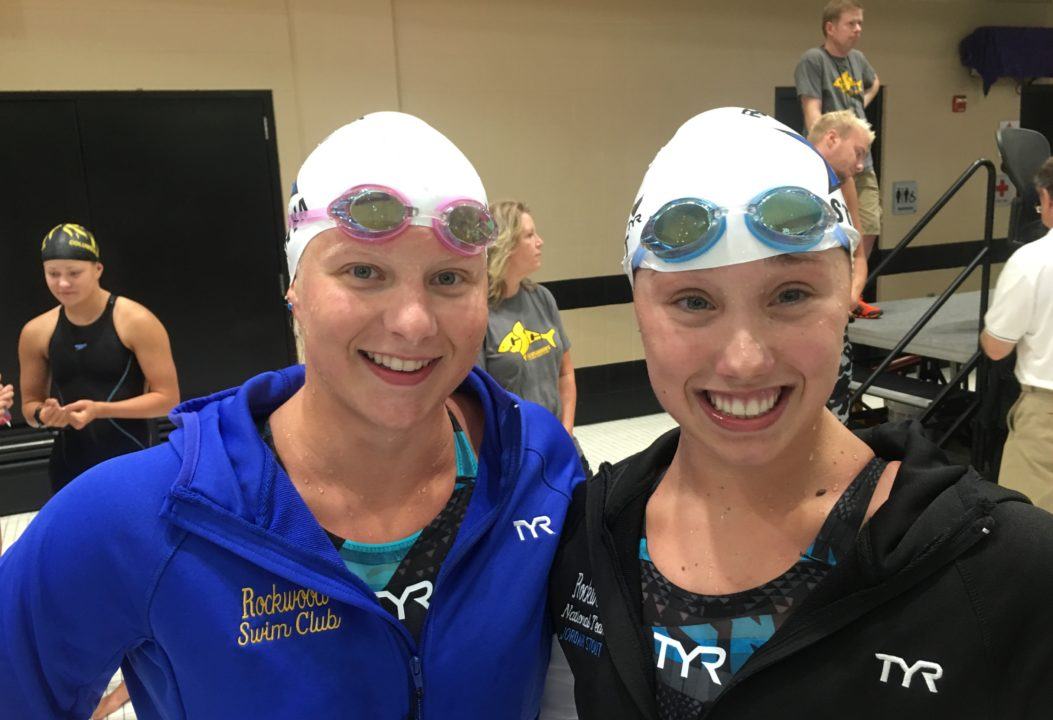 Rockwood Swim Club is starting to break away from the pack in team score, breaking a Sectional Relay Record set in 2009 on the way.  RSCA got started quickly as the duo of Lauren Votava and Jordan Stout turned in their second 1-2 finish of the meet, taking the 200 freestyle to go along with their domination of the 100 free on day one.  The former Minnesota standout Votava and the Georgia commit Stout finished close together with nearly identical final splits at 2:02.60 and 2:02.77 respectively.  Greater Nebraska’s Dannie Dilsaver rounded out the medals at 2:03.80.

The men’s 200 freestyle featured two of the youngest athletes in the final breaking away over the final 50 meters. 15 year old Jack Dolan from Rockwood cranked out a final split of 27.35, a full second ahead of anyone else in the field, to move up from 5th to 2nd at 1:53.15.  It was not enough though to overtake 16 year old Kevin Callan from Trident Aquatic Club who made a visible increase in tempo to fight for the win at 1:52.59.  Louis Behnen of the Kansas City Blazers held strong to finish at 1:53.23 for third.

Razorback Aquatics’ Luciana Thomas led the women’s 400 Individual Medley by over two seconds after her 1:05.38 fly leg, and increased that lead a little more into the backstroke.  At that point, Haley Downey from Phillips 66 Splash Club made up five seconds to breathe life back into the race, followed by Arkansas’ Mary Soderberg who also made a move in the breast from lane one.  Thomas was able to manage a strong freestyle split to hang on for the win with 4:57.46, which is a new lifetime best and Junior National qualifying time.   Downey (4:59.43) and Soderberg (4:59.63) joined Thomas on the medal stand.

Rockwood’s Phil Willett got out to an early lead in the fly with the only sub-minute split at 59.43, but that lead of over a second was absorbed by FAST’s Nick Alexander and Lincoln Select’s Brennan Balogh on the backstroke.  At the breaststroke leg, Willett gained significant ground on the field, as did future Missouri State teammate and 200 breast winner Christopher Heye.  Alexander turned in the best freestyle split of the race, splitting 30.48 and 30.17 over the final two 50’s to win the event by just over three seconds at 4:28.58.  Willett and Heye maintained their positions after the strong breaststroke leg, finishing second and third with 4:31.69 and 4:32.63 respectively.

Cailey Grunhard from Kansas City Swim Academy got out like a rocket in 100 Butterfly, leading by nearly a second with her 28.13 split at halfway.  Huskers’ Dana Posthuma, Mizzou’s Erin Metzger-Seymour and Rockwood’s Votava all made up tremendous ground over Grunhard’s 33.72 second half, but it was not enough.  The four touched nearly simultaneously with Grunhard taking the win by .08 at 1:01.85 over Posthuma (1:01.93) and Metzger-Seymour (1:01.95) who edged in ahead of Votava for second and third.

In the men’s 100 fly it was three Mizzou teammates who shared the podium.  St Louis product Andrew Sansoucie squeaked past fellow tiger and Canadian Olympian Mack Darragh on a well timed finish, winning in 54.56 to Darragh’s 54.60.  Martin Wallace got past Missouri State’s Paul Le 55.36 to 55.47 to join his training partners on the medal stand.

The Rockwood women capped a great night by taking down the Sectional Record in the 400 meter freestyle relay that was set in 2009 by the Topeka Swim Association.  The RSCA team of Stout, Claire vanBiljon, Anna Miller and Votava lowered the mark from 3:50.97 to 3:49.63.  They were over four seconds ahead of the next finisher, Club Huskers who touched in 3:53.92.  The Kansas City Blazers were third in 3:54.12.

Missouri State University grabbed the win for the men’s 400 free relay, in a race that came down to the final leg.  The Bears’ squad of Paul Le, Minki Kang, Will Frisbie and Will Brand was third at the 300 behind solid efforts from FAST and Swim Omaha, but none were able to fend off the 51.82 anchor leg from MSU’s Brand.