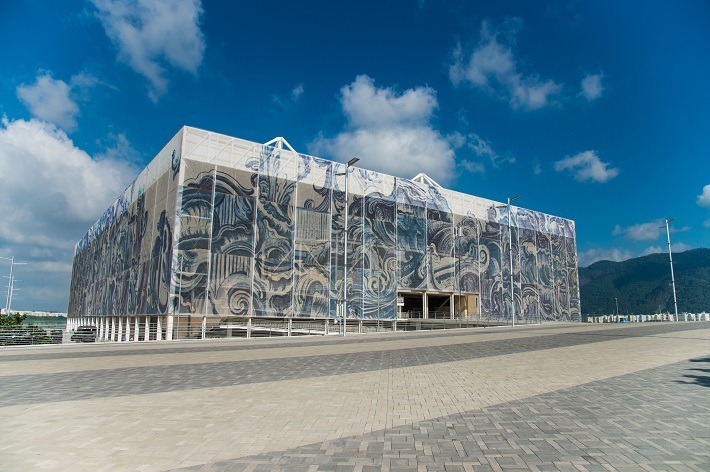 The Rio Olympic Games warm up pool is currently in the midst of a mosquito infestation, which is concerning given the spread of the Zika virus in South America. Current photo via Rio2016.com

The Maria Lenk Trophy was declared an overall success as a test event for the 2016 Rio Olympic Games, but the outdoor warm up pool is battling a mosquito infestation.

The news is particularly concerning, given that the World Health Organization (WHO) has declared a public health emergency in Brazil and Latin America due to the Zika virus, which is chiefly spread by mosquitos.

There is no treatment for Zika; symptoms include fever, rashes, joint pain, muscle pain, headache, and conjunctivitis. The virus is especially dangerous to pregnant women, causing microcephaly (which can lead to brain damage and birth defects) in newborns.

When the health emergency was declared, Dr. Joao Grangeiro, Rio’s medical director, said that athletes will not be at risk and should come to the Games.

Brazilian 2016 Olympic teamer Leonardo de Deus was one of the competitors who complained of the infestation at the Maria Lenk Trophy, the second of Brazil’s two Olympic qualifiers, saying that the outdoor warm up pool “had a ton of mosquitos.”

The organizers of the Games plan on covering the outdoor warm up pool with an air conditioned tent come August, which should help some with the mosquito problem, although some athletes may still be nervous about their health going into the event.

Take the games to London. Brazil can’t afford the games. We are jeopardizing the safety of athletes with this mess.

Now, any mosquito is a zika mosquito just like any bee is a killer bee.

I guess the question now is; do they have enough money to tent and air condition the warm up pool area? Should we be looking out for a GoFundMe Rio 2016 page?

There is something seriously off about this report! There is no way that any mosquitoes can survive in a swimming pool that is treated with chlorine… I travel regularly to Brazil and I have never heard of mosquitoes in well maintained pools at hotels and clubs or private homes. I’m pretty sure treated swimming pools in Rio are not breeding grounds for any mosquitoes unless their larvae have somehow become resistant to chlorine.

seems like the Olympics are being held in a tropical sewer.