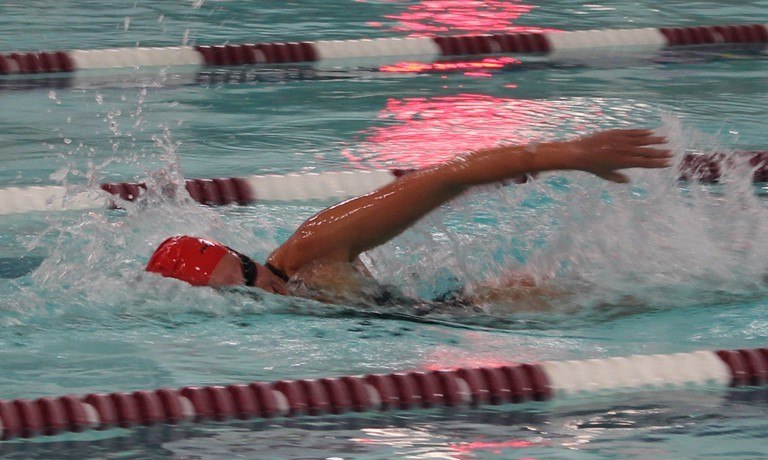 FORDHAM VS. LASALLE VS. RICHMOND

BRONX, N.Y. – The Spider Swim & Dive program got a preview of some Atlantic 10 competition on Saturday afternoon in a tri-meet with Fordham and La Salle. Richmond logged 10 first-place finishes and swept the 200 back event.

In the 100 back, sophomore Hannah Gouger turned in the fastest time at 56.95, as Richmond placed three in the top-five with senior Hannah Verrette (57.20) and freshman Jordan Kohut (57.54).

The Spiders will return home for back-to-back meets beginning on Friday afternoon. Richmond will take on Villanova at noon before facing Campbell on Saturday morning. Both meets will be available on the Atlantic 10 Network.

Bronx, N.Y. – (January 20, 2017) – For only the second time this season, the Fordham swimming & diving teams hosted a home meet at the Col. Francis B. Messmore Aquatic Center, welcoming the La Salle Explorers and the defending Atlantic 10 women’s champion Richmond Spiders on Saturday afternoon.

Fordham won five events in women’s competition, led by sophomore Amelia Bullock, who took first in the 100 butterfly in 56.03 seconds and the 200 butterfly in 2:01.10.  Freshman Michelle Martin was also an individual winner, taking the top spot in the 50 freestyle in 23.98 seconds.

The Rams’ other two wins were in the relay events.  Fordham’s 200 medley relay team of Martin, Gabrielle Celia, Bullock, and Samantha McDonald took first in 1:45.95, while the 400 freestyle relay group of Tara Brunner, Caitlin McNary, McDonald, and Theresa Mullen finished first in a time of 3:31.80.

The Rams also won five events in the men’s competition, which began in the 200 medley relay, where Auston Ramsay, Travis Monahan, Joe Mercurio, and Joseph Vizza took first in 1:33.09.

Vizza then added an individual win, taking the top spot in the 200 freestyle in 1:43.90.  Mercurio also earned individual win in both the 50 freestyle in 21.55 seconds, as well as the 100 butterfly, where he tied with La Salle’s Jakub Batosiewicz at 50.38 seconds.

The final event winner was Isiah Magsino, who won the 200 individual medley in 1:56.06.

The Rams will next be in action on Wednesday, January 24th, when Fordham hosts Iona for the final home meet of the season, beginning at 5:00 PM.

NEW YORK, NY – The La Salle swimming and diving team competed with two Atlantic 10 teams, Richmond and Fordham, in a tri-meet on Saturday that will serve as a tune up for the upcoming conference championship. The women were downed against both teams, losing 218-79 to Richmond and 211-84 to host Fordham.

“Today we competed against two A-10 schools in great preparation for the championship,” said head coach Jamie Platt.

Junior swimmer Olivia DiStefano turned an impressive performance for the Explorers. She finished second in the 100 back, finishing in 57.03 seconds. Later in the day, she finished fourth in the 100 free (54.09 seconds). DiStefano was also part of two fourth-place relay teams.

In the dives, senior diver Sydney Szopo placed second in the one meter dive and fourth in the three meter.

“As we move closer to the championships, we are seeing the small things we have been working on improve,” said Platt. “While we aren’t ready yet, everything if moving towards peak performance.”

The women’s team returns home to host Arcadia on Friday at 6:00 PM.

Fabian Bergman ended the day with three wins. He won the 100 back (49.56 seconds) over three seconds ahead of second place and the 200 back (1:48.44) almost ten seconds in front. Bergman, a senior, was also part of the winning 400 free relay team (along with Jakub Bartosiewicz, Marcus Forsgren, and Aleksandar Nikolic), finishing in 3:07.02.

Diver Dylan Yurasits swept the competition, finishing first in both dives. Yurasits scored a 310.25 to handily win the one meter and 315.6 in the three meter, narrowly edging teammate Blake Griffith.

“As we move closer to the championships, we are seeing the small things we have been working on improve,” said Platt. “While we aren’t ready yet, everything if moving towards peak performance.”

The men’s team returns home to host Arcadia this Friday at 6:00 PM.