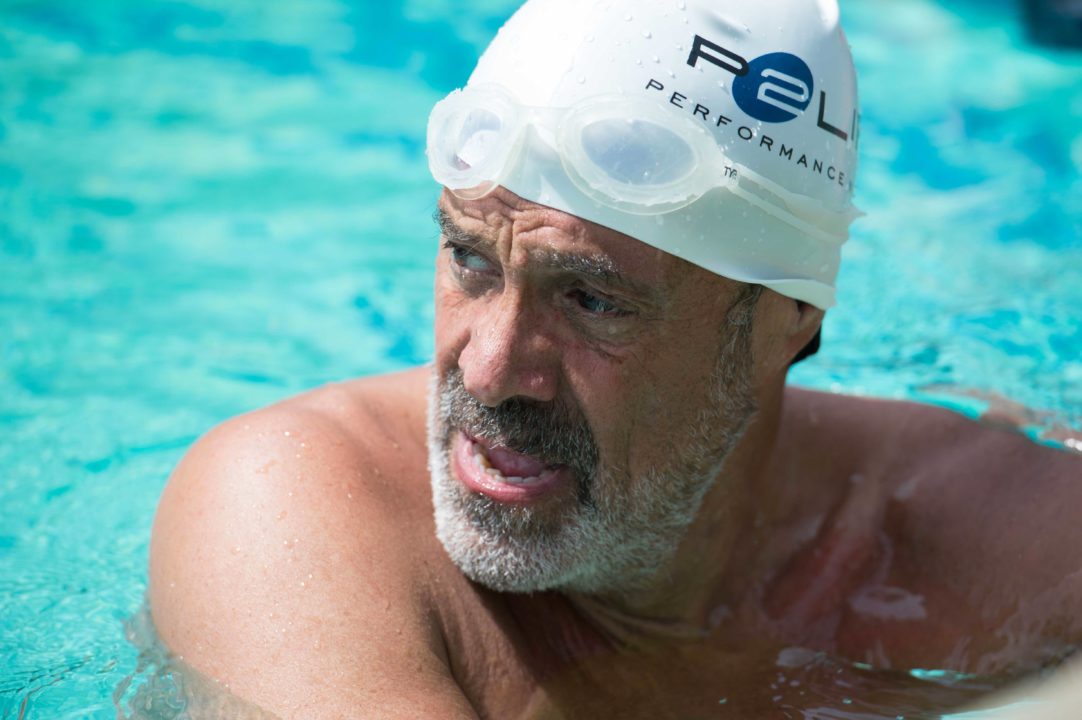 Rich Burns, International Masters Swimming Hall of Fame swimmer and holder of 56 FINA Masters World Records, is a living inspiration to all masters swimmers.  Rich, whose signature stroke is the backstroke, currently swims with the Tamalpais Aquatic Masters program in San Rafael, California and has also been a part of 28 World Record setting relays. His recent battle with cancer has reignited his commitment to the sport and kept him focused on his health and nutrition. Here’s what we learned about his inspiring story:

Rich, can you share with us how you got your start in swimming?

Sure! Prior to high school, I didn’t do organized sports as a kid and had no competitive sports experience. But I spent a lot of time around water. My best friend at the time swam AAU and he was a natural for the high school swim team. I followed him to the pool and made the team. By the time I was a senior, I was ranked 10th in the country in backstroke but only 3rd on the New Trier team, one of the best high school teams ever assembled. A few of my teammates were gold medalists in the ‘64 Olympics. It was a great chance to grow up in a great program and get serious about the sport.

After high school, I showed enough potential to join the team at Indiana University, which was also one of the premier swimming programs of all time. I had the chance to swim for the legendary coach, Doc Counsilman. I was a pretty small fish in a very large pond. When I finished my college career, I moved on to other things. Then in 1976, about 10 years later, I got involved in the sport again as a Masters swimmer. I’ve been doing it ever since and it will be 40 years this year.

That’s great that you got involved in swimming again after so many years. Tell us what’s changed for you during that time.

When I started competing again, I discovered my competitive gene. Compared to the superstars I swam with in school, I realized that I had not been that competitive and now began to thrive on racing. But probably the biggest competition for me came with being diagnosed with bladder cancer two years ago. I wasn’t willing to accept that I had it, or that I was a cancer patient. I didn’t want to join “that group”, so swimming through my course of treatment was my way of denying that I had cancer.

At the beginning of 2014 when I began treatment, I swam at USMS Spring Nationals and at the World Championships in Montreal that August and did quite well. Then that fall I had my major surgery to have my bladder removed. I was out of the water for about 6 weeks and lost about 20 pounds. I measured my recovery process by how quickly I could get back to doing the times I did before.

That’s a major life change. What else changed as a result of your diagnosis?

In the hospital, I had nothing to eat or drink for 6 days. After I got out, I had no appetite for a long time! Interestingly, chocolate shakes were the only thing that sounded appetizing. So P2Life Nutriboost shakes became my diet. From a nutritional point of view, I trust and believe in P2Life and it became instrumental to my recovery.

I had never been a big nutrition person. I didn’t eat poorly, but I never made the effort to understand nutrition. One of my teammates, Laura Val, told me that I had to change the way I eat. I cut out bacon, hot dogs, very rarely do I have red meat and I also cut out most fried foods and have severely reduced my sugar intake. When I used to do a lot of traveling for business, I was always at the drive thru. So I cut a lot of stuff out of my diet and as a result lost 20 pounds – before my surgery. It makes a difference.

Tell us what you do to manage race day stress, Rich?

A lot of what I do is mental preparation. I visualize my races. I close my eyes, and start a stopwatch. I imagine my strokes, where I am in the pool, the pace, and finish. I can usually come within a second or two of my goal times. Having that awareness of what a race is all about really helps me prepare.

To combat stress, have confidence that you’re ready. That you’ve done the training and put in the work. You also “have to race to race”, meaning there is no substitute for experience. There is no perfect race and you have to get as many mistakes as possible out of the way. I learn something every time! I also trust my coach, Marie McSweeney, implicitly and rely on her training routine to feel prepared. Marie is a master Masters coach and really knows how to keep me engaged and motivated.

So speaking of meets, what records or accomplishments are you most proud of?

Certainly the International Masters Swimming Hall of Fame; being inducted in 2010 was a big deal. It’s recognition of a body of work and it feels really good to be acknowledged. I am especially pleased that I have been able to set records in all the strokes except breaststroke. The other thing is the way I’ve been able to recover from cancer. I treated it as another competition. And I feel like I’ve won, or at least so far I am winning.

Any last minute advice for our readers?

Swimming is a way to quantify your life. You can see how you compare to what you did a year or two ago, or 20 or 30 years ago. So swimming is a way to measure the aging process by comparing times from one year to the next. And you can measure it to the 100th of a second. I am fascinated by those metrics.

Fitness is important – as I learned from my illness. People treated me like I was some sort of poster child for the benefits of being in shape. I take it for granted but even the doctors credited my recovery to my conditioning. That was gratifying.

Just get in the water. Figure out your reason for swimming: is it fitness, camaraderie, health, competition? Whatever the motivation, stay focused on that! But it’s also a personal choice so make sure it’s fun too. It’s too easy to let go and just stop. In this day and age, life is complicated and it’s too easy to stop. If you let it drift away, it’s almost impossible to get it back. You gotta enjoy it!

Rich, thanks again for your inspiring words and we’ll see you at the next meet!

P2Life is family owned, performance-based, nutritional supplement company that was designed for swimmers, by swimmers. P2Life takes great care in ensuring that every batch of their performance line is tested to be free of banned and illegal substances.

Over the past couple years, athletes taking P2Life products have had some astounding results. See below for more.

Swimming interview is courtesy of P2 Life, a SwimSwam partner.

Rich, I am proud to have been your Indiana teammate those 4 years. And, to compete against you and your stellar relays at Master’s Nationals in years past. Glad I mastered breaststroke and you weren’t in my lane. But your Master’s World Records are really impressive. I only have one so I know what sacrifices and hard work you’ve done to earn every one of yours. Well deserved. My best for your continued success.