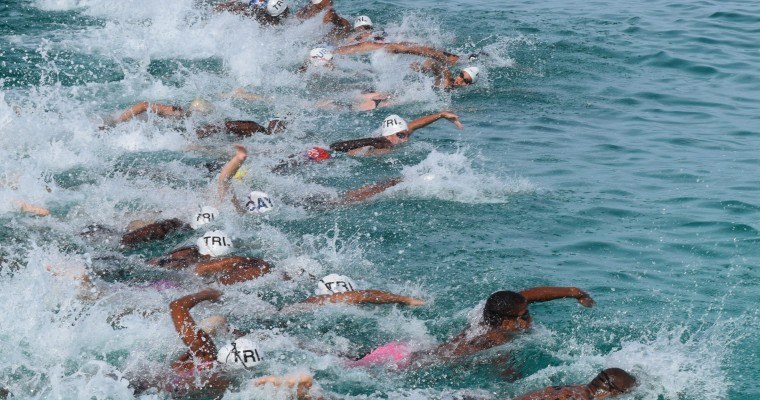 The 2014 European Aquatics Championships in open water to date have continued to be a revelation of new faces, as... Stock photo via Mike Lewis/Ola Vista Photography

The 2014 European Aquatics Championships in open water to date have continued to be a revelation of new faces, as Frenchman Axel Reymond took the win in the men’s 25km race on Sunday.

Expectations stabilized then a bit in the women’s race, where Italy’s Martina Grimaldi won by 7 seconds – backing up her World Championship in the same event from last year.

The Frenchman Reymond used a pace that hasn’t been beneficial among winners all week long, holding the front of the lead pack for most of the race. He battled with Russia’s Evgenil Drattcev, who is more than 10 years Reymond’s senior, for the last 12 kilometers of the event, as the two pushed well out in front of the rest of the pack. Ultimately, an initial final surge by Drattcev wasn’t sustainable, and Reymond fought back to a 13-second victory.

Reymond is not a total unknown, though this is certainly a breakthrough swim for him. Thus far in his career, the Frenchman has shown the most aptitude in the longer 25km races. His last big win came almost a year ago at the Ohrid Lake Grand Prix, a part of the FINA Open Water Swimming Grand Prix circuit, which is a 30km race.

The female winner in that event was Martina Grimaldi, and the two were partnered on top of the podiums again her in Berlin. Grimaldi, though, wasn’t quite as bold over the first 23 kilometers of this race. The 25km even was swum as a combined race, so she actually was swimming in the lead pack of the women’s race with the trailing pack of the men’s race in combination. Even among the women, though, she wasn’t really the pace-setter that Reymond was. Grimaldi was at no point until the final stretch the leader for any significant push.

Even going into the last lap of this 10-lap race, there wasn’t much clear separation among the lead pack of about 10 women. A final push from the favorite Grimaldi, however, wound up giving her a fairly comfortable 7-second margin of victory.

Grimaldi’s winning time was 5:19:14.1, followed by Hungary’s Anna Olasz for silver (5:19:21.0) for silver and German veteran Angela Maurer (5:19:21.4) for bronze. That makes for the 6th-straight European Aquatics Championships at which open water swimming has been offered where Maurer earned a medal, dating all the way back to Istanbul in 1999.

The medal table as of posting, across all disciplines: