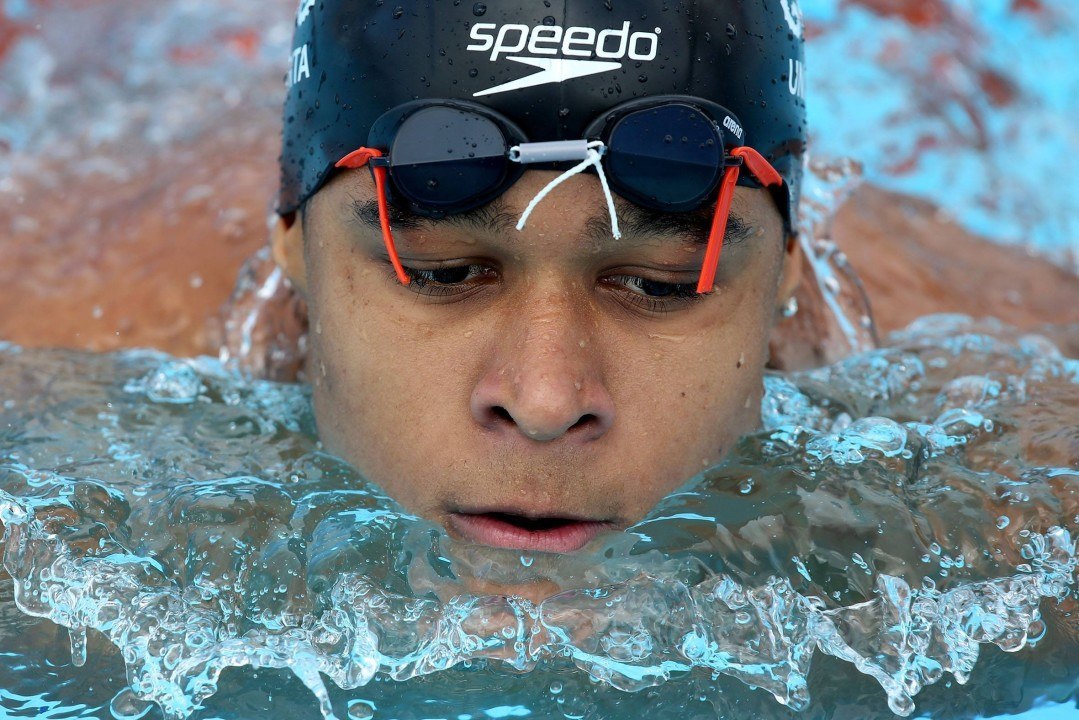 The Brazilians got their first taste of Matheus Santana's quality on day 1 of the 2014 Youth Olympic Games in a relay. Current photo via Satiro Sodre/SS Press 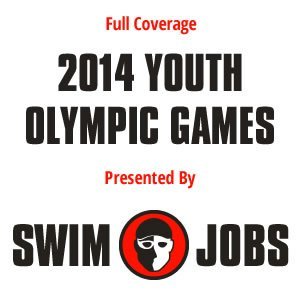 The first day of the second edition of the IOC’s Youth Olympic Games saw the beginning of fruition of one of the obvious goals of this event.

Several swimmers wound up on podiums from countries that are not typically considered among the elite swimming nations in the world, and the hope is that this success will give them continued motivation to reach for the senior Olympic level by 2016 and 2020.

Among the swimmers introduced to the world on day 1 was Vietnam’s (1) Nguyen Thi Anh Vien. The 17-year old is already a well-known quantity in Southeast Asia, as the defending SEA Games Champion in the 200 back, the 200 IM, and the 400 IM – part of a 6-individual-medal performance at the region’s premier multi-sport event last December.

She’s going for a big number this week in Nanjing as well, with 9 big individual events (though the Nanjing page gives some indications that she’s already whittled that down to just 5). She started that off well with a 2:12.66 victory in the women’s 200 IM.

That included beating two other very good swimmers – Hong Kong’s Siobhan Haughey, a Junior World Champion in the 100 free, and American (2) Meghan Small, one of just three Americans to medal across all sports on the first day, and the only swimmer. Small did add a few seconds from the time she swam at Nationals a few weeks ago.

Another introduction is El Salvadorian swimmer (3) Marcelo Acosta, who’s based out of Azura Aquatics in south Florida. He took a silver medal in the 400 free in 3:51.32. His previous best time that we can find is just a 3:57.20 from the Santa Clara Grand Prix, and he was only a 4:02 at last year’s World Championships in this race.

He’s even better in the 800, which is an event held for men at these Youth Olympics (unlike the real Olympics), and could be on target for a gold medal there.

He was part of a podium that one would never expect at a meet with IOC sponsorship like this one in an event like the men’s 400 free. (4) Ukraine’s Mykhailo Romanchuk won gold, Acosta from El Salvador won silver, and Norway’s Henrik Christiansen.

(5) China continues to dominate, at this home meet, the mixed relay events. They won both golds in 2010, and started the meet in Nanjing by easily winning gold again, swimming a 3:27.02 in the mixed 400 free relay. That includes a 53.43 anchor from 17-year old Shen Duo. She swam just an individual 200 free at Worlds last year, where she was 26th, but has clearly made significant strides since then. The Chinese women now become serious contenders in all three relays at the 2015 World Championships – something they haven’t really been since former YOGs champion Tang Yi’s development stalled out a few years back.

The United States didn’t make the final in that relay, indicative of the composition of the roster that is better-suited for the medleys (though even there, the American lack any real breaststrokers). The Americans have still finished no higher than 5th in a relay in the history of the Youth Olympic Games.

And finally, Brazil got a little preview of their newest sprint superstar, the Junior World Record holder, Matheus Santana. He split a 47.73 on Brazil’s 3rd leg, a time that would hold up at any age and any level of competition, yet he’s just 18.

Santana has diabetes, and that cost him a swim at last year’s Junior World Championships, but if he can manage his health a la someone like Gary Hall, Jr., who was also diabetic, he is well on his way to being the next sprint star out of the Brazilian program. If Cesar Cielo can hold on to his quality between now and the 2016 Olympics, the Brazilians might have finally put together the 400 free relay that can put them on the podium, and in front of a home crowd no less.

China had a boy swimming a 48,6 leg. While gold is almost a lock for santana this chinese guy will be on the mix for silver now

The big question is whether Santana can get 48 low or possibly break 48. I think he can. Excited to see what he can put up.

I think he will swim around 48 low-mid. His close was not strong(24.97×24.8) like he made his 48.35 junior record.In prelims, i think his start was very,very weak for a top sprinter.A lot of improve to do there.