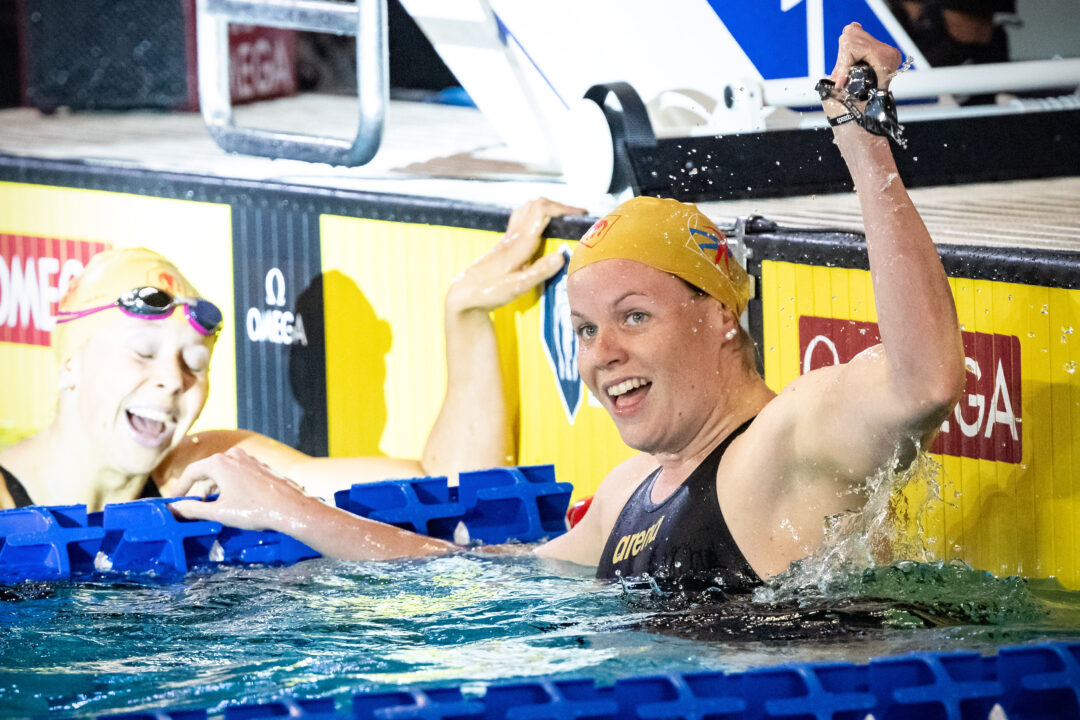 In an interview with SwimSwam, Lichtenstein's Julia Hassler shares insights about swimming for a small country. Current photo via Giorgio Scala Deepbluemedia

Julia Hassler from Liechtenstein retired from competitive swimming last week after completing the ISL playoffs in Eindhoven. There, she was part of the Toronto Titans roster.

Julia started with swimming lessons when she was 4 in Liechtenstein and from that point on she never stopped.

Hassler says that that representing her country in the whole world is something special for her:

“It was always an honor to represent Liechtenstein and also special because our biggest team was three people at short course Europeans in Copenhagen 2017. Normally it was just me and another swimmer. I think many people did not even know that Liechtenstein is a country and it was also hard to believe for other people that only around 40,000 people live in Liechtenstein.”

The smallest state in the USA, Wyoming, has 10 times the population of Lichtenstein.

Julia shared the good things and the bad things about growing up in such a small country:

“I think it has pros and cons to swim in a small country. It is definitely easier to qualify for international competitions but on the other hand, you are always by yourself and there is no big team you are part of. When I started the swimming federation also did not have any money, so my parents had to pay for my first junior Europeans. I think when you are young and not that good it is definitely an advantage to be in a small team but when you reach a certain level I think it is definitely better and more fun to swim in a country where swimming is bigger. We also have only three 25 meter pools with four lanes.”

Sometimes the only way to improve is to move, and being the first to be competitive is hard because you have no one to look up to:

“After I finished high school at 19, I moved to Zürich in Switzerland and in 2015 I changed to Heidelberg in Germany, because in Liechtenstein the facilities are not made for swimming on an international level. It was also not that easy to find a training group outside of Switzerland, because many nations have centers that are only available for swimmers in their country. I also had to organize and lookup everything by myself, so that is also definitely a big disadvantage when you are a swimmer from a small country and there was no swimmer before me I could ask for advice or help.”

Nevertheless, Julia, who is 28 years old, can boast 3 Olympic Games in her career, and she describes each one of them as special for a specific reason:

“I think the first one in London 2012 was the most exciting one because everything was new, huge and I also swam in both my races personal best times. In Rio 2016 I didn’t perform well, but in the end, Olympic Games are always an amazing experience. Tokyo was definitely different due to Covid. But I thought we would be more limited in the village. In Tokyo, I had my best results and I was there with my two best friends which came: my coach and my physio. We made memories for a lifetime. “

Nice interview. I’m kind of surprised a swimmer of that caliber would have difficulty finding a training group outside Liechtenstein. If anything, having a superstar from a tiny country in your training group seems like it would be good publicity. Everybody likes Liechtenstein.