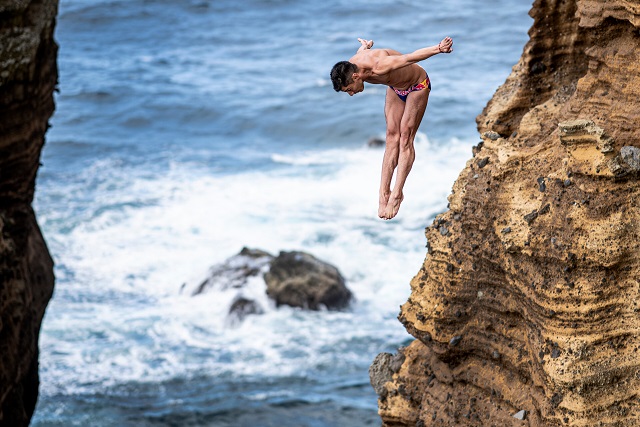 The Red Bull Cliff Diving World Series hits new ground off the coast of Beirut’s neighborhood of Raouché, with the reigning champions intending to stretch their winning form: Rhiannan Iffland (AUS) could win for the 5th consecutive time this year, while a victory for Gary Hunt (GBR) from the natural landmark would mean the 3rd win in the season’s 3rd off the cliff competition after Philippines and Portugal. Although the leading duo remain on course to retain the King Kahekili trophy for now, the battle for vital ranking points will spice things up in Lebanon’s capital city.

In the Portugal leg two weeks ago, Hunt had to be at his imperious best to see off the marauding challenge of Mexico’s Jonathan Paredes, who himself broke a long-standing record by earning six times the highest note from the jury at a single stop. If Paredes is able to transform the extra push from such a strong performance into consistency, the Brit’s ride on the wave of confidence might get choppier moving into the business end of 2019. America’s Andy Jones, 2nd and 3rd in the previous two stops, needs to be listed when talking of favourites. The 34-year-old is a master of aerial awareness and always to be considered when tricky or new locations are on the schedule.

Nobody has yet been able to stop the women’s dominant figure Iffland, the 3-time champion from down under – neither an unknown location nor the competition from the likes of Lysanne Richard, the season’s three-time podium finisher from Canada, or Great Britain’s Jessica Macaulay. The 26-year-old toned down the difficulty in Portugal to secure her first podium in her debut year as a permanent diver and has surpassed Yana Nestsiarava from Belarus in the overall standings to sit in 3rd.