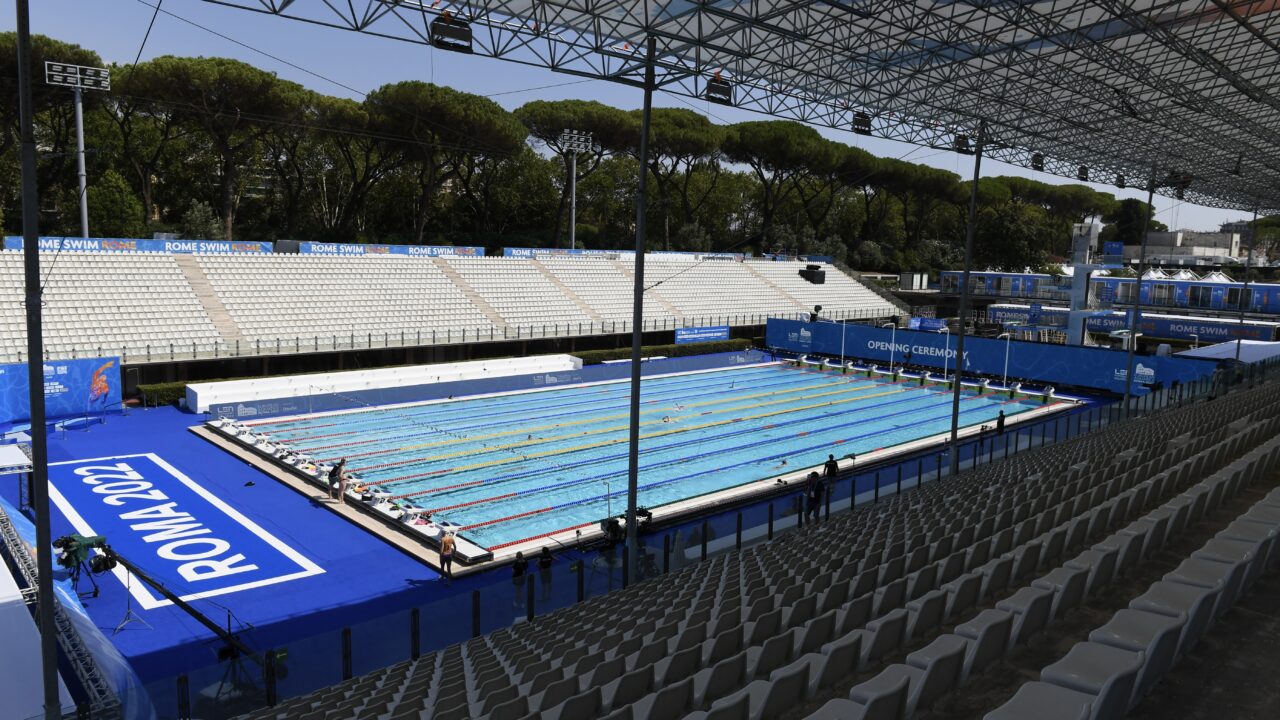 With several days of forecasted rain, Rome, Italy is facing a rainy week for the 2022 European Championships, which are being held outdoors. Stock photo via Fabio Cetti

Weather forecasts are calling for a rainy week at the European Champs.

According to the 10 day forecast on weather.com, there will be a chance of rain everyday next week in the city of Rome, Italy during the 2022 European Championships, including days of thunderstorms on Tuesday, August 16 and Thursday, August 11.

Weather Forecast for the 2022 European Championships:

In Rome, the average temperature for the month of August traditionally runs at about 87 degrees Fahrenheit, with some days reaching into the lower 90s. In addition, the city averages 3.3 rainy days in August, or about 1.45” of rainfall, meaning both the temperature and predicted rainfall for the meet are well beyond the city’s average.

In most situations, rain would have little impact on an event of this caliber. However, these Championships are being held at the Parco Del Foro Italico, an outdoor facility. With this, the meet could potentially see rain delays or even cancellations of events or condensing of semi-finals. Mentally, this could be an issue for competitors as they need to adjust their pre-race routines to comply with such delays. It also may cause some scheduling issues, especially if a session is canceled and its events need to be rescheduled.

Plus, storms in the area could affect the winds for some of the races, resulting in abnormally fast or slow performances, especially in the 50s. Back in 2014, Sarah Sjostrom shattered the 50 butterfly world record by .64 seconds swimming in an abnormally strong tailwind at the Swedish Championships. Her time of 24.43 still stands as the fastest in history by a wide margin, despite the fact that the record is over 8 years old, proof of both Sjostrom’s dominance as a competitor and the strength that a tailwind can provide.

The rain and heat will also have an impact on viewing the competition for spectators, as only one of the stadium’s grandstands is covered.

SwimSwam’s Giusy Cisale, who is at the meet, reported that crews were still working on preparing the venue for the meet as of 10PM local time on Wednesday evening.

I think it’s inappropriate to imply that Sarah’s WR was aided by “abnormally strong tailwind“.
If there is any data to support the claim that there WAS a strong tailwind, that data should be provided.

In addition, please provide the data that shows “the strength that a tailwind can provide”.

And in case SwimSwam are prepared to allow me to elaborate, I’d be more than happy to do so in a formal article.

Contrary to the SwimSwam journalist, I can even provide some hard facts.

“Back in 2014, Sarah Sjostrom shattered the 50 butterfly world record by .64 seconds swimming in an abnormally strong tailwind…”

It didn’t help that much. She went 24.6 in Budapest 3 years later in a closed Duna Arena.

Wind is more crucial in track and field. That’s why everything more than +2.0 doesn’t count.

I am going Monday, Tuesday and Wednesday. Hopefully for these 3 days there’s no rain 🙂

I thought it was in Munich

The swimming was in Glasgow 4 years, while the athletics in Berlin.
This year most of the races will be Munich, and only swimming, open water swimming, diving and synchro is in Rome.

Those folks need to toughen up! When I was a boy growing up in Montana, it snowed at outdoor LC meets while we raced. You people ever see the timers clearing the blocks of snow?

This is a brutally dry and hot summer in Europe from Palermo to London, so any rain will be welcome.

Indeed – Never thought I’d be praying for rain in England, but I have been doing so for weeks. Earth is scorched and yellow, on the verge of moving from pre-drought to official drought… send some our way please, Rome!