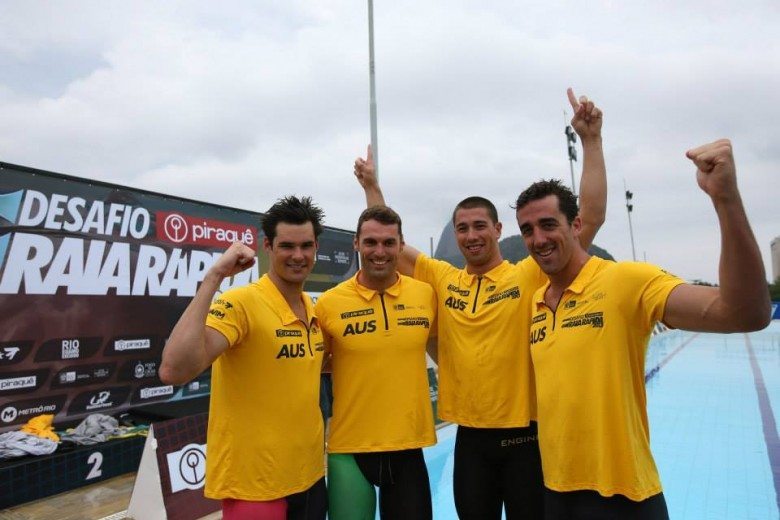 The 2013 Raia Rapida competition saw teams from Brazil, Australia, France and the United States pitted against each other in... photo via Facebook

The 2013 Raia Rapida competition saw teams from Brazil, Australia, France and the United States pitted against each other in a sprint eliminator in what was a rainy Rio de Janeiro.

There were four rounds of each stroke 50 with the slowest in each race being eliminated.

After the individual events the Brazilians went into the relay with a lead having collected nine points followed the the Americans with eight and the Australians with seven. The team from France did not collect a single point in the individual events with all of them team members being eliminated in the first round.

In the relay the Australians came up big winning the event collecting six points to propel themselves to the victory with 13 total points. The French finished second in the relay followed by the Brazilians and the Americans.

Many of the athletes told globoesporte.com they loved the unique and challenging format, “In addition to being fast, you have to hold up well,” said Nicholas Santos. “The competition is very tiring . Lactic acid goes up with each passing minute.”

“It’s a great competition,” said Christian Sprenger who took the breaststroke event. “That was what I expected a few weeks ago when I learned that I would attend.”

“It’s a tough competition , a game mentally and physically . This is a good chance to try new ways to swim faster.”

“The knockout event is very exciting.”

“The competition was fantastic and very exciting,” said Australian Matthew Abood. “It was good to feel the atmosphere of the city that will receive the Olympic Games in 2016 and I hope to be here competing with my fellow Australians.”

I really enjoy knockout format events, it’s a shame there aren’t more of them around. Perhaps it’s something that could be tried to attract more people to swimming who aren’t traditional fans?

Australia – 1:38.23 is the best ever(even dont being a recognized WR by FINA because is a Olmpic Pool).Brazil swim is a new South American record.

so 200 MR LCM is not recognized by FiNA, but mixed relays of all kind are officially recognized?

It would be nice if it could be a Official World Record.

All teams did not seny their potentially best rosters..

If we made just a little math (I will do only for Bra but there are others countries who could put up a strong relay.,. Usa and Australia being the strongest) If you use Daniel, Felipe, Nicholas and Cielo on optimal condition you could sum up for a 1:36..)

Woohoo for Australia!!! My boy part of the team. Breaststroker!!! World Champ!!! Fina needs to get act together & recognise these achievements!! Sooo proud of the whole team!!