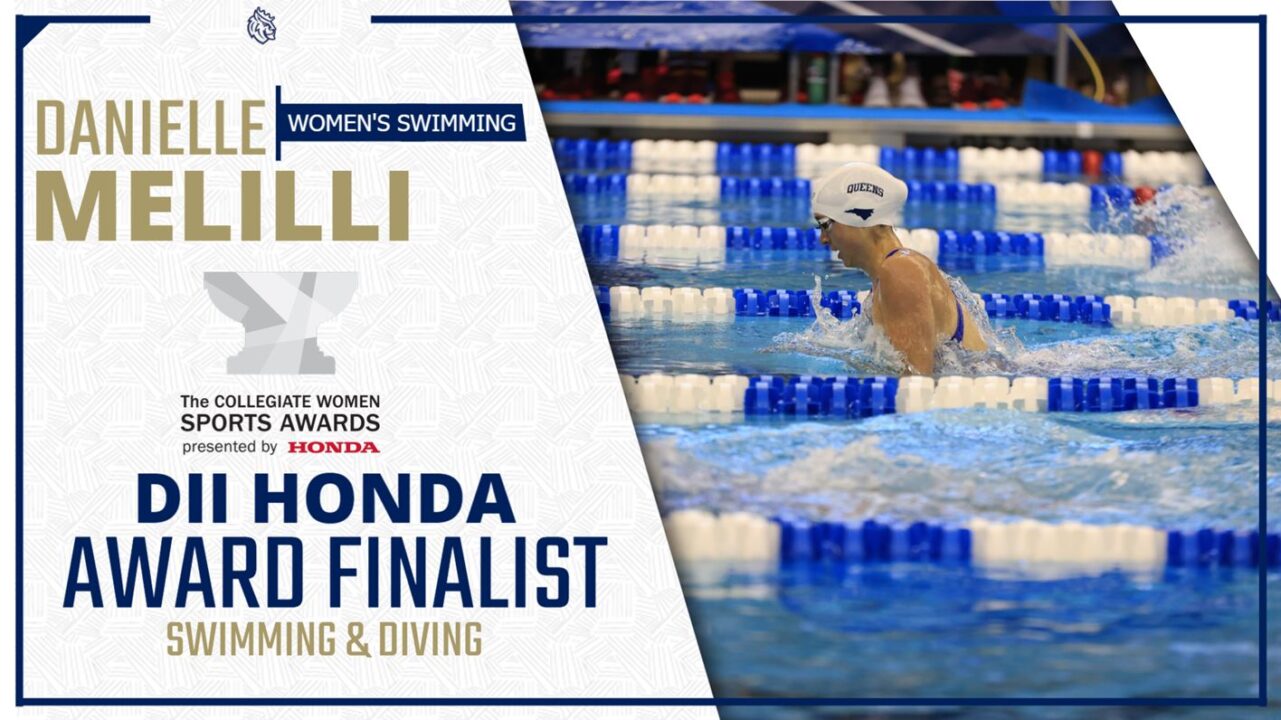 Melilli is named a finalist for the second straight year, becoming the third women's swimmer at Queens to receive the honor in back-to-back seasons. Current photo via Queens Athletics

LOS ANGELES, CALIF. – Queens University of Charlotte women’s swimmer Danielle Melilli has been named a DII Honda Award Finalist for Swimming and Diving, as announced by Executive Director Chris Voelz of THE Collegiate Women Sports Awards (CWSA) presented by Honda. Melilli becomes the third women’s swimmer at Queens to receive the honor in back-to-back seasons as Polina Lapshina earned the recognition in 2019 and 2020 while Patricia Castro-Ortega was a nominee in 2015 and 2016.

Melilli is now designated one of 11 finalists for the prestigious DII Honda Athlete of the Year. The award will be voted on at the end of the academic year by national balloting among 1,000 NCAA member schools as part of THE CWSA program which is now in its 46th year.

“This is a huge honor to be nominated for this award,” said Melilli. “Receiving this award wasn’t my plan, but it is part of the process to winning championships at Queens University of Charlotte. I want to thank my coaches, my family, my friends, and my extended family that I call my team for always supporting me. This team constantly pushes me to be great in and out of the water and to be the best example of a collegiate student athlete that I can be. Thank you.”

Hailing from Douglasville, Ga., Melilli was recognized as the Honda DII Finalist for Swimming & Diving last season, however, a DII Athlete of the Year was not honored due to lack of representation of all sports during the truncated 2020-2021 seasons.

This past season, Melilli helped spark the Royals to their seventh straight National Championship. For the second straight season, the junior was named the CSCAA Female Swimmer of the Year after her performances at the championships. Melilli set a new NCAA record capturing gold in the 50-yard freestyle earning All-American honors while posting All-America swims in six other events. Overall, Melilli is a three-time NCAA Champion in individual titles and is a 14-time All-American.

“Danielle continues to progress at a rapid rate as she hits many milestones leading into her senior year,” explained Associated AD and Director of Swimming Jeff Dugdale. “Danielle is only the third female swimmer at Queens to win the CSCAA Swimmer of the Meet two years in a row. She broke a National Record in the 50 yd freestyle. She qualified for the World Championship trials and is the captain of our program while thriving in the classroom.  She truly embraces excellence as a lifestyle not as an event and communicates early and often showing that she is very coachable. We are so excited for her to witness her journey during her senior year.”

All Honda Sports nominees from DII and DIII become a finalist for the prestigious 2022 Honda Athlete of the Year in their respective divisions, presented in a live telecast on CBS Sports Network on June 27, 2022, in downtown Los Angeles. The Honda Award finalists are recognized in 11 DII and DIII NCAA-sanctioned sports; cross country, basketball, field hockey, golf, lacrosse, soccer, softball, swimming & diving, tennis, volleyball, and track & field.

The CWSA, entering its 46th year, has honored the nation’s top NCAA women athletes for their superior athletic skills, leadership, academic excellence and eagerness to participate in community service. Since commencing its partnership in 1986, Honda has provided more than $3.4 million in institutional grants to the universities of the award winners and nominees to support women’s athletics programs.