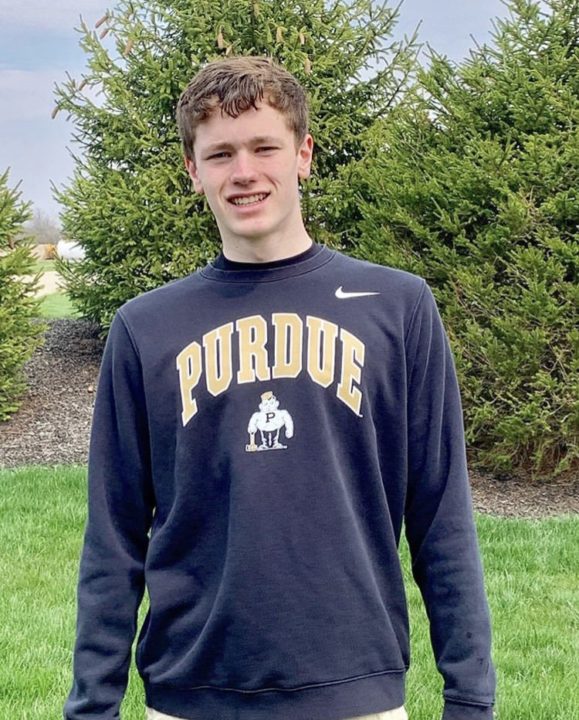 Purdue freshman Brady Samuels dropped nearly a full second in the 100 fly to take the top seed for tonight's finals in 45.95.

The day two prelims of the Purdue Invite had several highlights from Power Five programs in Louisville, Purdue and Northwestern, including a massive breakout swim from Purdue freshman Brady Samuels.

The session started off with the 400 IM, where Louisville’s Abby Hay cruised to the top seed in 4:10.51, almost 7 seconds clear of the field. That time also clocks in over 2.5 seconds faster than last year’s NCAA invite time of 4:13.19. At last year’s NCAA’s Hay was a B finalist in both the 200 and 400 IM. In the men’s version, Purdue’s Brett Riley will take the top seed heading into finals after posting a 3:49.06 in the prelims. He is followed by a pair of Louisville Cardinals, with Daniel Sos qualifying second in 3:50.83 and Hayden Curley coming in third in 3:52.70.

Louisville was dominant in the women’s 100 fly, with sophomore Gabi Albiero taking the top spot in 52.20. She was followed closely behind by her teammate Abby Hay, who touched in second in an impressive 52.38 just minutes after taking the top spot in the 400 IM. Both swimmers came in under last year’s NCAA invite time of 52.70.

The men’s 100 fly was highlighted by a breakout swim from Purdue freshman Brady Samuels, who will head into finals as the top seed in 45.95. Samuels chopped almost a full second off of his previous lifetime best from last spring and clocks in over three tenths under last year’s NCAA invite time. Northwestern’s Federico Burdisso, who earned the bronze medal in Tokyo in the 200 fly, qualified second in 47.03.

Louisville will take the top seeds into finals in both the women’s and men’s 200 free. In the women’s event, Arina Openysheva touched first in 1:48.03 for the Cardinals. Openysheva was followed closely by Missouri State’s Liberty Howell, who qualified second in 1:48.46. Louisville’s Colton Paulson posted the top time in the men’s 200 free in 1:35.47. Touching in second was Northwestern’s Connor Lamastra, who transferred to the Wildcats after previously competing for Dartmouth in the Ivy League.

The Northwestern women impressed in the 100 breast, having three swimmers under last year’s NCAA invite time. Fifth year Sophie Angus qualified first in 59.40, while junior Hannah Brunzell was close behind in 59.65. Northwestern had a third swimmer under a minute, with senior Tara Vovk sneaking just under the barrier to qualify fourth in 59.99. Both Brunzell and Angus scored at last year’s NCAA’s in the 100 breast, while Vovk did not qualify last year. Joining the Northwestern trio under a minute was Florida International’s Christie Chue, who will head into finals in the third position after posting a 59.93.

Louisville’s Evgenii Somov dominated the men’s 100 breast in 52.52, just off of last year’s invite time. McKendree University’s Filipe Pinheiro finished in second in 53.72, which currently stands as the 3rd fastest 100 breast in Division II this year.