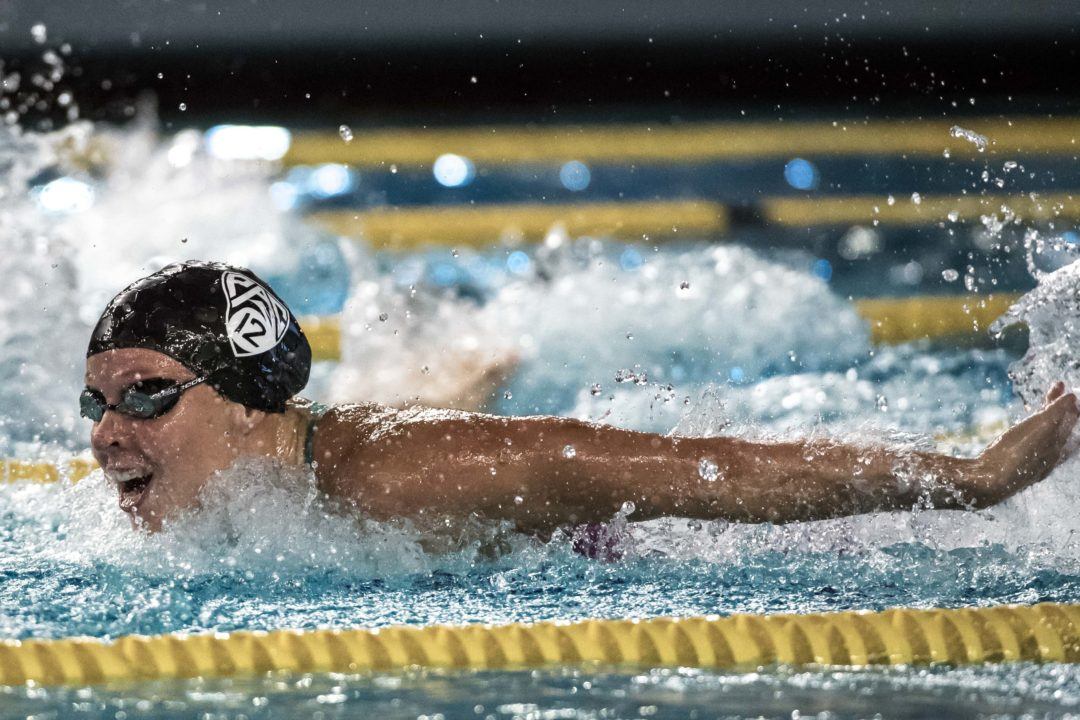 USC's Louise Hansson won't swim the 200 free - where she would've been the 2nd-seed behind Katie Ledecky. Archive photo via Mike Lewis/Ola Vista Photography

SwimSwam has put together the up/mid/down report for the final day of competition at women’s Pac-12s.

This morning, we will see huge names in action at the Pac-12 Swimming and Diving Championships, including Simone Manuel, Abbey Weitzeil, Kathleen Baker, Katie Drabot, and Ella Eastin.

Psych sheets have been submitted for the 2018 Pac-12 women’s swimming & diving championships, and unlike most of the country’s conferences, they aren’t completely useless.

Stanford sophomore Katie Ledecky, the best swimmer in the country, is entered in 7 individual events, even though she can only race 3. That list includes a few curveballs in the 200 back, 200 fly, and 100 free – besides her more standard 200 free, 500 free, 1650 free, and 400 IM. She swam (and won) all 3 of the longer freestyle races at NCAAs last year, but remember that she swam the 400 IM at Pac-12s and broke the American Record, so don’t be surprised if we see her test another event.

Kathleen Baker, who if she’s behind Ledecky in terms of collegiate value, isn’t by far, also winning 3 events at NCAAs last year, is only entered in her allotted 3: the 200 IM, the 100 back, and the 200 back. Those are the 3 events that she won at NCAAs last year.

A few other nuggets from the psych sheets:

The table below lays out all swimmers who have more-than-3 top-10 rankings in the conference, and crosses out any events that they are definitely not swimming.

Men’s ACCs begins today – is there going to be any preview at all?

Are Katie McLaughlin and Katie Ledecky tied for 1st with their seed time in the 500 free, or is that a typo?

It’s a typo. McLaughin is the 4th seed.

Where is that Stanford seed time from in the 800 Free Relay? Did they just make up a time? I was under the impression that they hadn’t swum it yet this year.

They don’t have a faster or newer time because Simone was out.