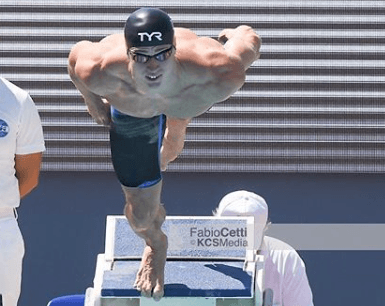 Watch Ben Proud lean into his start to draw a disqualification in the men's 50 freestyle. Archive photo via Fabio Cetti - kcs Media s.r.l.

In one of the most anticipated events of these Short Course World Championships, the men’s 50m freestyle, the crowd in Hangzhou had somewhat of a let-down as British champion Ben Proud produced a false start in the final to wind up disqualified.

After checking in with the 4th seeded time of 20.98 in the prelims, followed by 20.71 in the semi-finals, which was a mark only .05 off of his own 20.66 National Record, the stage was set for Proud to take on fellow heavy-hitters Caeleb Dressel of America, Vlad Morozov of Russia, Cameron McEvoy of Australia and more. In fact, both Dressel and Proud each scratched the men’s 50m fly, partly to go all-in on this furious event where anything can happen.

And, something did, to the tune of Proud leaning into the start and getting disqualified out of lane 5, as you can see here, courtesy of @SwimNerd’s tweet:

This is the 2nd major disqualification for Proud this year, as the 24-year-old false started in the prelims of the men’s 50m butterfly at this year’s Commonwealth Games.  Proud recognizes this as an issue, with the speedster posting on Instagram post-Hangzhou qualification, “Disappointed with a DQ tonight, mistakes will be made but twice in one years makes it something worth focusing on!… At least I know what my new years resolution will be!”

It’s very reassuring to know that even I CAN beat the fastest man ever in textile.

Respect for the way he acknowledges his mistake and commits to fixing it. Very mature response.

Agreed he seems a great guy and he is hyper focused on the 50 Free LCM in a way most other aren’t. He has a great chance in Tokyo if things keep going well.

In other news, he filed paperwork in Britain to legally change his name to Ben Embarrassed.

I’ll be here all week folks – don’t forget to tip your waiters!

Not that hard. Wait for beep and then go. Stop trying to anticipate.

It’s pretty clear at this point he’s attempting to stay in motion from “Take your marks” to the beep. If the starter had been slightly faster he would have caught it perfectly but he definitely didn’t settle at any point