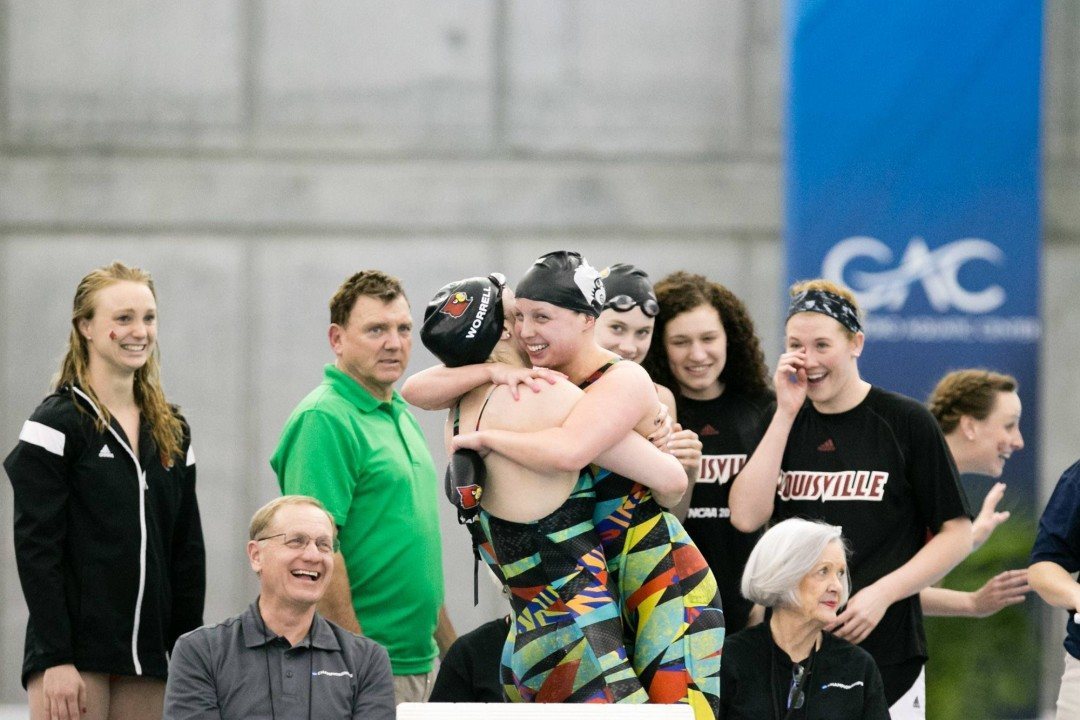 Celebrate the race, but cheer the process. Archive photo via Tim Binning/TheSwimPictures.com

In a very basic sense, there are three aspects to training in any sport. The two that are most commonly known, physical and mental training, many great athletes excel at. But for most, that is where the training ends. The final, overlooked, aspect of training is the social part, and yes, I know that sounds weird. Who in the world trains socially??? I’ll let you in on a secret. Most of the time, the people who do a great job of training the social side of themselves have no idea they do it.

Let me give you an example. At meets, when you look on deck, this is the general layout you most likely will see. Athletes sitting in bleachers, hopefully talking, laughing, and smiling. Coaches line the edges of the pool, furiously writing down splits on their heat sheets, their faces beet red from the constant yelling, whistling, and spastic arm movements. Parents, siblings, and other assorted family members of the athletes, force their way through the massive crowds to see their athletes swim, holding cameras high. Everyone loves to support the swimmer during the race, right?

From this fairly generic setting, we can learn a bit about the human brain, and it’s many strange functions. What do all these people cheer for? Outcome. We live for the outcome. That record setting swim, the gold medal we get on the podium, that’s what we crave. That’s what we love to see, what we love to support, and that’s fantastic! Who doesn’t want to be cheered for while they race?

The only problem with all this is a mystery to most people. What is wrong with cheering during the race, right? The most forgotten part of the outcome is the process, and that’s where the cheering really should be done. No matter how much we wave our arms and scream, the swimmer in the water has already predetermined their own outcome. How many of us can honestly say that, yes, the people going crazy in the stands pushed our performance to a completely new level?

We have it backwards. The time to cheer isn’t when Michael Phelps is winning his eighth gold medal. Alright, maybe that’s acceptable. The time we really should have been cheering is the year, two years, before the Olympic Games had even begun, when not a day went by that technique wasn’t changed, muscles destroyed, and improvement made.

Maybe we don’t train ourselves socially, we train those around us. Through example, we cast a mold for the people that are important to us to fill. Parents, coaches, swimmers, keep on going crazy at the meets. Cheer your hearts out, and then cheer some more! Where I challenge you to make a change is during the process. At those tough mid season practices, be the most supportive person in the world.

For the parents, maybe that means giving the swimmer some space, keeping a full stock of food for them to devour, and leaving plenty of time for rest and recovery. Or you crazy coaches, who spend hours on deck, pouring over every detail of training, every start, turn, and finish. Show the swimmers that despite the endurance fly sets, brutal IM training, and intense threshold sets, you really do care about them, the practices you pass out like death sentences, you give because you want to see them improve.

Finally, swimmers. Be the most amazing teammates in history. When the coach gives you a set that you’re not sure if you can complete without vomiting, cramping, or passing out, instead of releasing a groan of misery, let loose a battle cry that will go down in history. Smile, laugh, and joke. Most importantly, be a leader. Take on the practice like you have nothing to lose, because you don’t! Remember that everyone else is going through the same challenges as you, and lead the charge in overcoming them.

It’s so easy for me to lose sight of this…Thank you!

Gavin is a student at Noblesville High School where he swims for the high school swim team. Gavin has been swimming since he was eight years old. His first coach was his father at Noblesville Swim Club, but when his dad retired from coaching swimming in 2010, Gavin switched to …

More from Gavin Cooley
See All