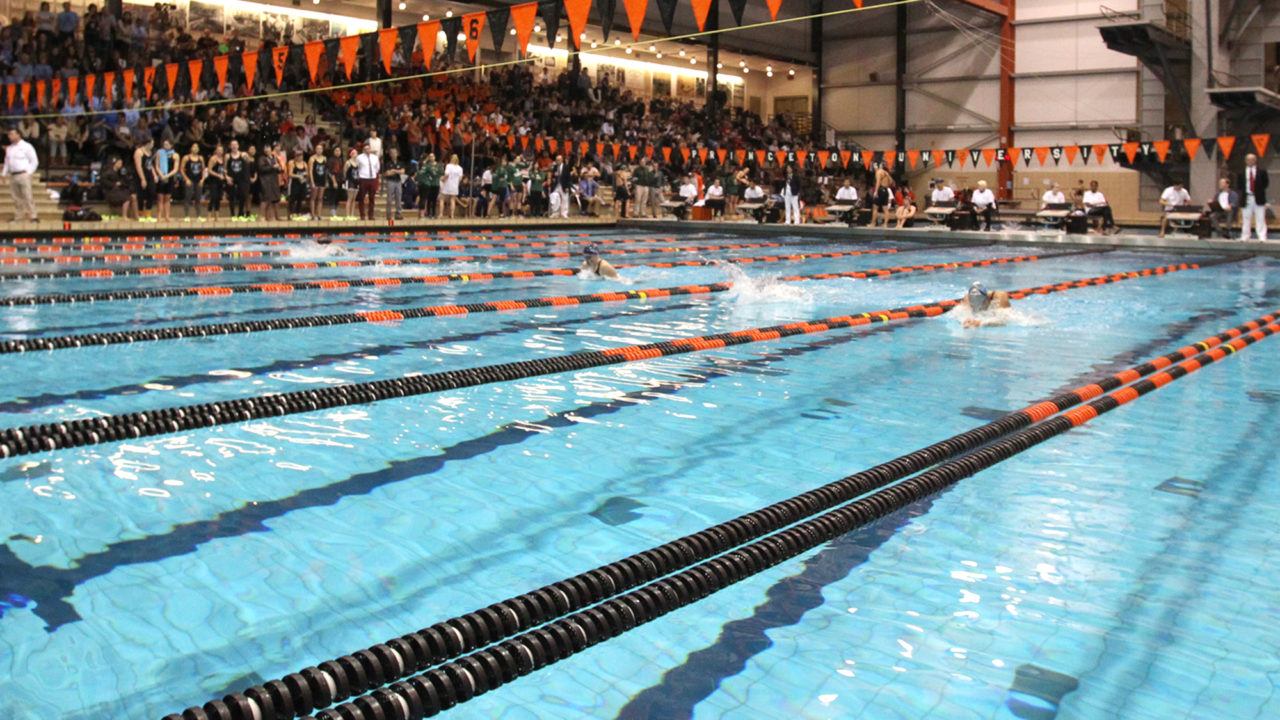 The Denunzio Pool, which saw no varsity men's swimming last season with the program suspended, will host the 2018 Ivy League Championships. Stock photo via Princeton Athletics

Princeton has been announced as the host of the 2018 Men’s Ivy League Championships. The event will be held from February 21-24 at the DeNunzio Pool – a 50-meter x 25 yard competition pool with spectator seating for 1,700.

Princeton then receives hosting honors in the season after the school cancelled the second half of its men’s swimming & diving season. That included causing Princeton to miss the Ivy League Championships as a result of what was described by the school as “vulgar,” “offensive,” “racist,” and “misogynistic” comments directed toward, among others, members of the women’s team. The team will resume competition in 2017-2018 after bringing in a Certified Professional Behavioral Analyst and Values Analyst to lead a 3-day program with the team.

Princeton’s 31 men’s Ivy League Championships are more than any other school in the conference’s 60-year history (76 champions crowned). They had won the 2015 and 2016 titles, and 7 of the last 8, before their chance at a 3-peat was blocked last season.

That left the door open for the team’s arch-rivals Harvard to win their 24th title.

Princeton has published their 2017-2018 roster, which includes 9 freshmen. Other than those freshmen and graduating seniors, the 2017-2018 roster is identical to the one Princeton listed in the summer before last season. That means that, in spite of other disciplinary actions and the cancellation of half of the season, Princeton’s roster has had no swimmers removed either from transfer, quitting, or being kicked off the team. It’s a rarity in NCAA swimming for no swimmers to leave a team in the off-season, and is an even bigger surprise given what has happened in the last 6 months.

Wow the 2015-16 Princeton Mens Swimming suspension was a real bummer. Perhaps Listserve sites for adolescent male teams need to be squelched everywhere. I hope Coach Orr gets this behind him. Princeton will always be a big draw for Ivy swimmers, so I assume he will succeed.

He was obviously training through Trials last week to peak for the Ivy’s again.

Great to see Princeton back in action. No one left the team because the team is a class act of students, athletes, coaches and staff caught up in a complicated situation. Cannot wait to see what the team does this year!

The “class act of students” you are referring you were cited making “vulgar”, “misogynistic” and “racist” remarks towards the women’s team. It doesn’t take an ivy league student to deduce what they likely were. So you can call this a “complicated situation” or whatever you would like but I am personally disgusted with the news.