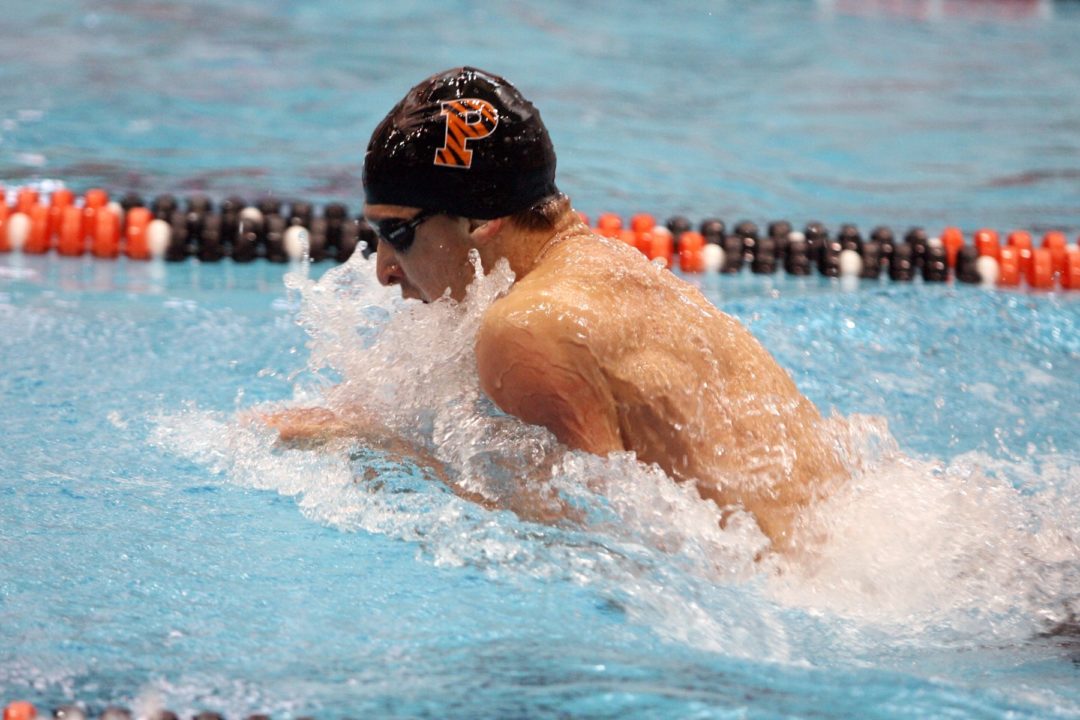 The Princeton Tiger women swam a rare doubleheader dual on Friday, beating Columbia in the morning and Navy in the afternoon.

PHILADELPHIA – The University of Pennsylvania men’s swimming and diving team split a meet with Princeton and Cornell on Saturday afternoon at Sheer Pool. The Quakers fell to the Tigers, 194-106, and beat the Big Red, 219-81.

It marked the sixth straight win for the Red and Blue against Cornell. Penn won a pair of events in the meet.

During the diving events on Friday night, Cody Hopkins finished first in the 3M with a score of 329.50.

Quaker Notemeal
*In the 1M diving event on Friday, Jack Williams finished second with an NCAA B cut score of 310.50 while Hopkins was third with a mark of 306.15.

The University of Pennsylvania women’s swimming and diving team split a meet with Princeton and Cornell on Saturday afternoon at Sheer Pool. The Quakers fell to the Tigers, 162-138, and beat the Big Red, 208.5-91.5.

It marked the fifth time in the last six meetings that the Red and Blue defeated Cornell. Penn won six events on the day, capped by the 400 free relay to close things out. The Quaker quartet of Camryn Carter, Bridget O’Leary, Margot Kaczorowski and Lia Thomas won with a time of 3:22.70.

The victory in the 400 free relay put an exclamation point on a big day for Thomas, as she won three events, set a pair of program records and posted the top time in the NCAA in two events. Thomas touched fist in the 200 free at 1:43.47. It was the fastest mark in the NCAA in the event this season and a new program best. She also finished first in the 500 free with a program record time of 4:35.06. She won the 500 free by over 12 seconds and her mark was the fastest in the NCAA this year. Thomas also added a victory in the 100 free (49.42).

Quaker Notemeal
*Hannah Liu was the other Quaker to win on Saturday, finishing first in the 100 breast with a time of 1:02.87.

Up Next
Penn Closes out the first semester of action in early December at the Zippy Invitational hosted by Akron.

Princeton dominated the relay events once again, finishing first and third in the 200-medley relay and one-two in the 400 free relay.

Princeton had three more events where two Tigers finished in the top three: The 100 fly, the 200 breast, and the 500 free.

Princeton’s strong performance didn’t end there. The Tigers finished one-two in three additional events: The 100 back, 50 free, and 100 fly.

Next up: The Princeton University swimming and diving team will host the Big Al Invitational from December 3rd through December 5th.

PHILADELPHIA – Junior Jeremy Marcin led the Cornell men’s swimming and diving team in its Ivy League tri-meet against Penn and Princeton, notching a pair of second place finishes in his events on Saturday at Penn’s Sheerr Pool in Philadelphia.

Senior freestyle distance specialist Jake Lawson swam well in his events, placing fifth in the 1,000 freestyle in 9:44.31 and sixth in the 500 freestyle in 4:42.27. Freshmen Sebastian Wolff and Jack Banks each notched a sixth-place finish in their respective events, with Wolff finishing his 100 breaststroke race in 58.03 and Banks completing his 100 freestyle race in 47.41.

Banks teamed up with Gurski, Marcin, and Kyle Pro in the 400 freestyle relay, as the Big Red quartet beat Penn in the event and placed fourth overall with a time of 3:07.84.

Despite improvement from a week ago and multiple strong performances by the Big Red, Cornell fell to both Penn and Princeton on Saturday. Penn emerged victorious by a score of 208.50 to 91.50, while Princeton bested the Big Red by a score of 235.50 to 64.50. With the losses, Cornell drops to 1-4 on the season and 0-4 in the conference standings.

The Cornell women’s swimming and diving team may have fallen to Penn and Princeton, but it certainly didn’t go down without a fight, tallying numerous strong showings on Saturday afternoon at Penn’s Sheerr Pool in Philadelphia.

In the swimming events, junior Melissa Parker and sophomore Priscilla Wongso paced the Big Red, as the pair made Cornell’s presence known in the freestyle events. The duo teamed up in both the 50 and 100 freestyle races, finishing among the top-five of both events. In the 50 freestyle, it was Wongso who notched the top finish, placing third in 23.69 with Parker following in fifth (23.74). The roles were reversed in the 100 freestyle, as Parker was the top finisher in third place (51.59) and Wongso followed in fourth (51.79). As if that wasn’t already enough, Parker also added a sixth-place showing in the 200 freestyle with a time of 1:52.51.

In the diving events, senior Demetra Williams secured a top-five placement in both disciplines, finishing as the runner-up in the 3-meter with 251.85 points. Williams posted a fourth-place finish in the 1-meter, amassing 242.85 points. Junior Elise Jendritz notched a fourth-place finish of her own, as her 245.05 points in the 3-meter was good for fourth.

At the end of the day, Penn emerged victorious over the Big Red by a score of 219-81, while Princeton defeated Cornell by a score of 221-78. With the losses, Cornell falls to 2-3 on the season and 1-3 in conference action.

The Cornell swimming and diving team will be back in action when it competes at the Zippy Invitational, hosted by Akron, on Dec. 3-5 in Akron, Ohio.

NCAA should be transparent about the rules and regulations for someone to switch from men’s team to women’s team.

Parents should speak up and demand some answer. All these staying quiet and don’t wanna ruffle some feathers energy won’t do any good for your daughters future.

The same for female athletes. It’s okay to be demanding and fight for your space and rights. If they don’t want to listen, make them listen. Do some walk out or boycott.

The NCAA is incredibly transparent about the rules and regulations.

Who make this rules and why no one objected to it? One year of testosterone suppression treatment will not make anything fair and equal for female athletes.

I don’t blame the swimmer and think that they should be able to compete in SOME way, but this is clearly not the answer. The IOC/NCAA’s decision on this does not follow the science/literature–if I am mistaken, someone please point me in the direction of the studies that show suppressing your testosterone for a year will automatically revert all of the impacts of male puberty.

It was only a matter of time before we saw something like this.

Allowing Lia to swim on the women’s team is just flat out wrong. This is the way to set back women’s swimming and athletics in general.