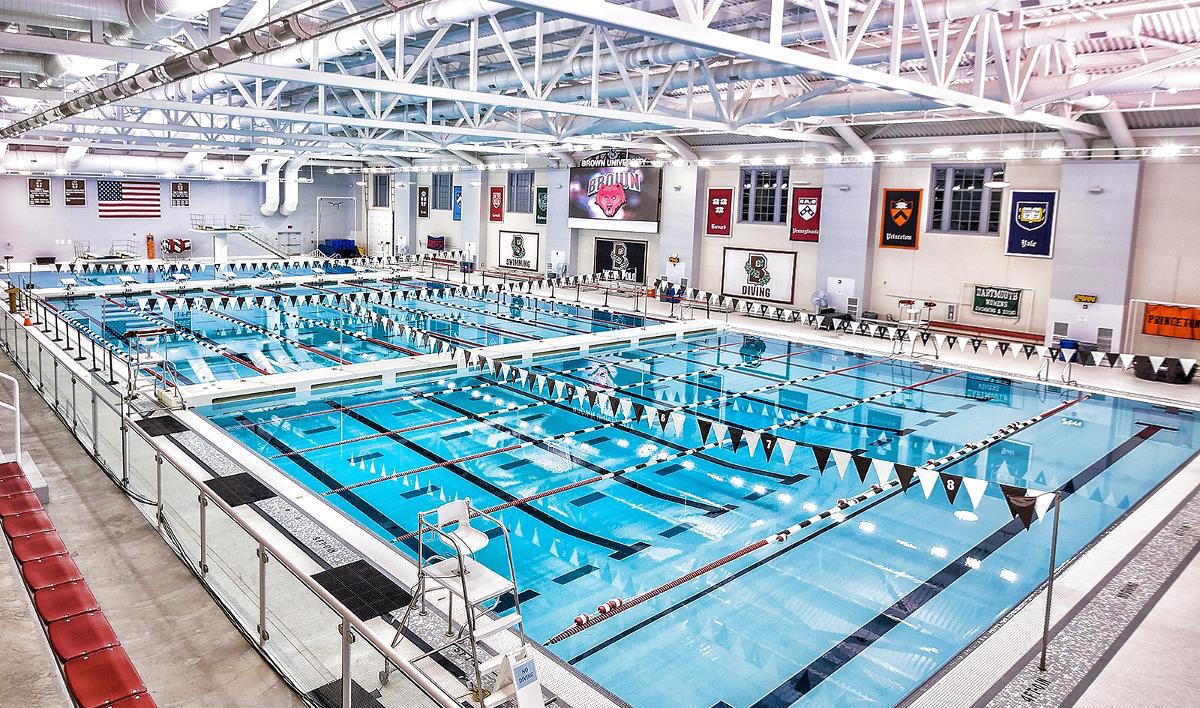 Brown split its dual meet against Yale, winning on the men's side but losing on the women's side. Yale then extended its women's win record to 3-0. Stock photo via Brown University Athletics

The Bears started the night with a win in the 200 medley relay with the team of Reid Arwood, Jack Kelly, Chris Ma and Horace Qiao finishing in a time of 1:29.00.

“That was a special win for our program tonight,” said head coach Kevin Norman. “We haven’t beaten Yale in a dual meet since 2001. Our team knew that, used that as motivation and rose to the challenge. I could not be more excited for this team. They’ve put in great work and deserved this moment.”

Kelly picked up a win in the 200 breaststroke with another school-record time of 1:55.44, winning by more than four seconds.

Brown’s team of Lu, Hess, Marcus Lee and Ben Hayes took second in the 400 free relay to close out the meet.

Brown women’s swimming and diving fell to Yale in a dual meet, 216-84, on Friday (Nov. 19). Julia Feord had a strong night on the boards for the Bears finishing first in both events.

“It was a great day on the boards for Julia who came away with wins and her NCAA Zone qualifying scores,” said head coach Kate Kovenock. “In the pool we are seeing in-season unsuited bests from swimmers in each of our training groups. Our team is looking forward to the Bruno Invite as a true display of the work that we have put in this season so far.”

Brown finshed third in the 200 medley relay with the team of Jenna Reznicek, Ellie Brault, Sage Matsushima and Samantha Scott touching the wall in a time of 1:42.42.

Barrett had another strong showing in the 500 free with a second-place finish in a time of 4:55.68.

The Bears will be back in action for the Bruno Invite, Dec. 3-5.

The Yale men’s swimming and diving team had three double winners but fell to Brown 174-126 in Providence.

Noah Millard captured both the 200 and 500 freestyles, Joseph Page won the 50 and 100 freestyles and Kevin Bradley was victorious off both the 1 and 3 meter diving boards.

The Bulldogs had the top two finishers off the 1-meter diving board as Aidan Thomas placed second to Bradley.

“There were many outstanding performances in the pool and on the boards tonight,” said Jim Henry, The Robert Kiphuth head coach of the men’s and women’s swimming and diving teams. “We continue to improve as a team with each meet and look to peak at the Ivy & NCAA Championships this spring.”

The Yale women’s swimming and diving team continues to roll. The Bulldogs cruised to a 216-84 victory over Brown at the Katherine Moran Coleman Aquatics Center in Providence.

Yale, which is now 3-0 on the season, had several strong performances, taking the top four places in 100 breaststroke and the 200 freestyle.

“There were many outstanding performances in the pool and on the boards tonight,” said Jim Henry, The Robert Kiphuth head coach of the men’s and women’s swimming and diving teams. “We continue to improve as a team with each meet and look to peak at the Ivy & NCAA Championships this spring.”

Next up for the Bulldogs is a meet with Southern Connecticut on Dec. 9.

Do we know if there was a timing issue with the women’s 200 medley relay? Multiple 23 splits on 50 backstroke including one that would’ve beaten the NCAA champ relay last year. Was there a 1.5-2 second delay for the timer to start or are people just crazy fast?

So Browns midseason meet is the one directly after they send their kids home for thanksgiving? Presumably either saddling former club coaches with getting them ready or just letting the athletes decide what to do? That’s the pay off for their hard work?

This is your take away from this article?? That meet was crazy fast for both teams. And a lot of schools swim in invites after Thanksgiving, including several others in the Ivy League (Harvard, Princeton, Penn, Columbia off the top of my head). And I’m pretty sure Brown swimmers would consider their first win against Yale in 20 years a pretty nice “pay off for their hard work.”

Why only use Brown press release for women and only Yale’s for men?