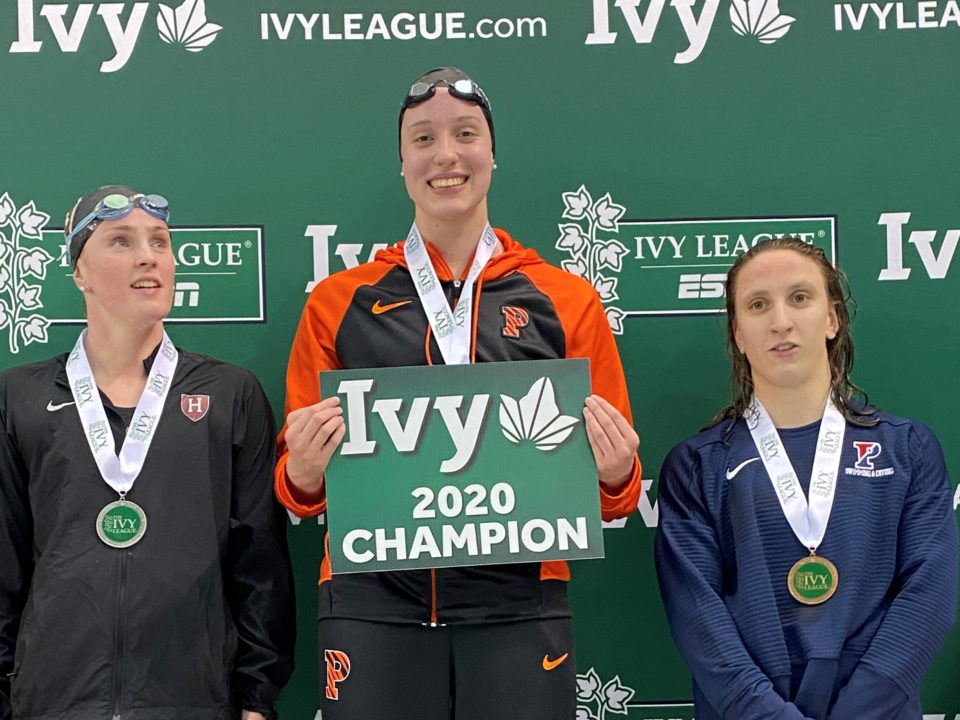 PLS freestyler Olivia Kim has announced her verbal commitment to Columbia for the 2022-23 school year and beyond.

Princeton freshman Ellie Marquardt kicked off the 2020 Ivy League Women’s Swimming and Diving Championships with a new meet, pool, and Princeton program record in the 500 free. Marquardt won the A final in 4:36.37, swimming a lifetime best by over 4 seconds.

The Ivy Meet record of 4:38.96 had stood since Princeton’s Alicia Aemisegger broke it in 2009. The Princeton program record, which also belonged to Aemisegger, was a 4:37.58 from her 4th-place finish at the 2010 NCAA Championships. Penn’s Virginia Burns had set the Brown University pool record in 2017 with 4:42.20.

Prior to arriving at Princeton, Marquardt’s best 500 free time was 4:42.09 from the Speedo Southern Premier meet in March 2019.

As a sophomore in high school, Ellie Marquardt was a 4:52.69 in the 500. As a junior she did not improve over the short course season, going a 4:53.40 for her season-best. After a great long course season, Marquardt lit up the pool for the Aquatic Team of Mecklenburg the following year, bringing her time all the way down to a 4:42.09. And today she has put up a 4:36.37, good enough to win both the Big Ten and the SEC and within two tenths of Paige Madden’s winning time in the ACC.
Nothing but massive congratulations to Ellie on this remarkable achievement. The amount of work and dedication she put in to getting to this point is undoubtedly… Read more »

This is an amazing time, and indeed the Ivy Meet record, but is not actually the League record – Cristina Teuscher was 4:35.45 back in 1998!

The Ivy League record book shows Teuscher’s top time as a 4:43 in 1998. I’ll keep looking though.

Yeah – had to go to Columbia’s record book to find it. Not something I witnessed, so placing my trust in them here…
https://gocolumbialions.com/documents/2019/4/1/wswim_records.pdf