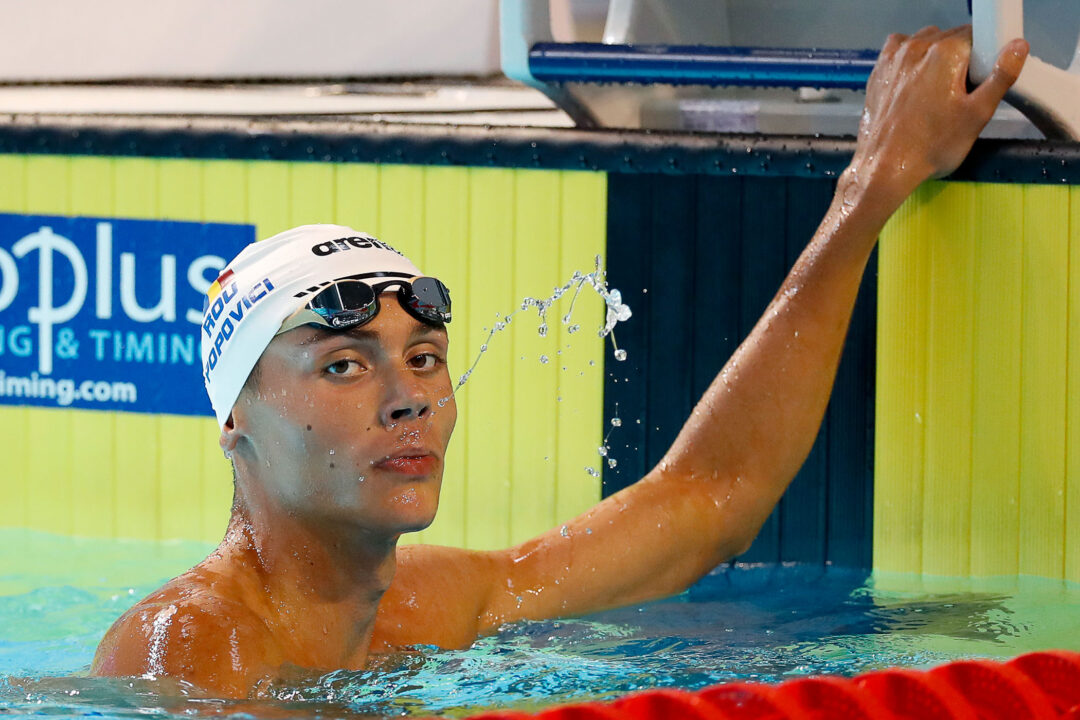 David Popovici led off the Romanian relay with a 100 free time of 47.34, over two-tenths faster than his winning time from the World Championships. Current photo via LEN/Simone Castrovillari

Rising star David Popovici continued to impress on Day 2 of the 2022 European Junior Championships in Bucharest on Wednesday, winning a repeat title in the boys’ 200 freestyle before leading off Romania’s mixed free relay with a blistering split.

Popovici, taking on his seventh race in just the fourth session of the meet, led off the Romanian relay with a 100 free time of 47.34, the third-fastest of his career and quicker than his winning time from the World Championships two weeks ago.

The 17-year-old set a personal best time of 47.13 in the semi-finals at Worlds in Budapest, lowering his World Junior Record and becoming the ninth-fastest swimmer in history, and then in the final he did enough to win gold in 47.58 over France’s Maxime Grousset (47.64).

Swim races are generally thought of as being in a vacuum, where each athlete’s result is entirely dependent on what they do in the water and no one else in the heat. But in reality, the wake of the swimmers around you, particularly in the sprint events, can hinder one’s time, which may have come into effect here.

Though he was at or near the front of the race the entire way, Popovici raced head-to-head with the fastest 100 freestylers in the world in the final in Budapest, while in tonight’s race, he had clean water.

Only three other swimmers broke 50 seconds on the lead-off leg of the relay, with Poland’s Ksawery Masiuk the next-fastest in an impressive best of 48.37.

In terms of splitting, Popovici flipped in 23.11 at the 50 before storming home in 24.23, marking one of the fastest back-half splits we’ve ever seen.

Leading off Tuesday night’s boys’ 400 free relay, he was out in 23.35 before closing in 24.19, which is believed to be the second-fastest closing split in history and the fastest from a swim that wasn’t a negative split.

Russia’s Andrei Minakov split 24.34/24.11 in a prelim swim at the Russian National Championships last year, and prior to that, Michael Phelps had the quickest back-half ever after splitting 23.31/24.20 leading off the men’s 400 free relay at the 2008 Olympics in Beijing.

Along with his PB from the Worlds semis, Popovici’s only other performance faster than tonight’s lead-off came in the final of last year’s Euro Juniors where he won gold in 47.30.

After cracking the 48-second barrier for the first time one year ago to the day at the 2021 Euro Juniors in Rome (July 6), Popovici has now been 47-point on nine different occasions.

Earlier in the session, Popovici won the 200 free for the second straight time in 1:45.45, having won the World Championship title last month in a WJR of 1:43.21.

Speaking on the 200 free, Popovici said he wasn’t too worried about his final time, and really soaked in the atmosphere racing in front of his home crowd.

“Today it wasn’t about time, I just wanted to enjoy this swim, I took the breath towards the crowd side  to see the people waving their flags and jumping in joy and it was great,” he said.

“Even if I had multiple swims daily, this atmosphere really helps me to recover and feel fresh. Now I’m kind of recognizing what Kristof Milak could feel while racing at home in Budapest at the Worlds.”

Moving forward, Popovici, a Bucharest native, will begin his pursuit of a repeat gold in the 50 free on Thursday morning, while the heats of the 100 free will kick off on Saturday.

American sprinters take notes. The days of fly-and-die are over! If you want to go 47-low, you need to be 24 on your back half.

Love to see these big time relay swims out of a star. This guy just moved way up the recruiting board for colleges across the country

He’s an NCAA swim coaches dream with his event lineup, would swim every relay for any team and win 100/200

If I remember correctly, Popovici said to Brett Hawke that he’s not thinking of moving to the US. They did a live together last winter(?) and he talked about it in more detail, if anyone wants to check that out.

Jacob Whittle GB has swum against Popvici several times this week- in individuals and relay lead offs. Whittle has fought hard every swim to stay in touch, swimming some pretty decent times.

17 years old and already been :47 9 times, with more to come later this week undoubtedly. Incredible.

I think there’s a 50/50 chance he goes a best time for the individual 100 but I don’t think he’s going to break the WR this week especially since he’s apparently back to heavy training for euros and world jr’s but crazier things have happened. Really makes me wonder how “rested” he was for worlds?

What’s the source that he’s back to heavy work?