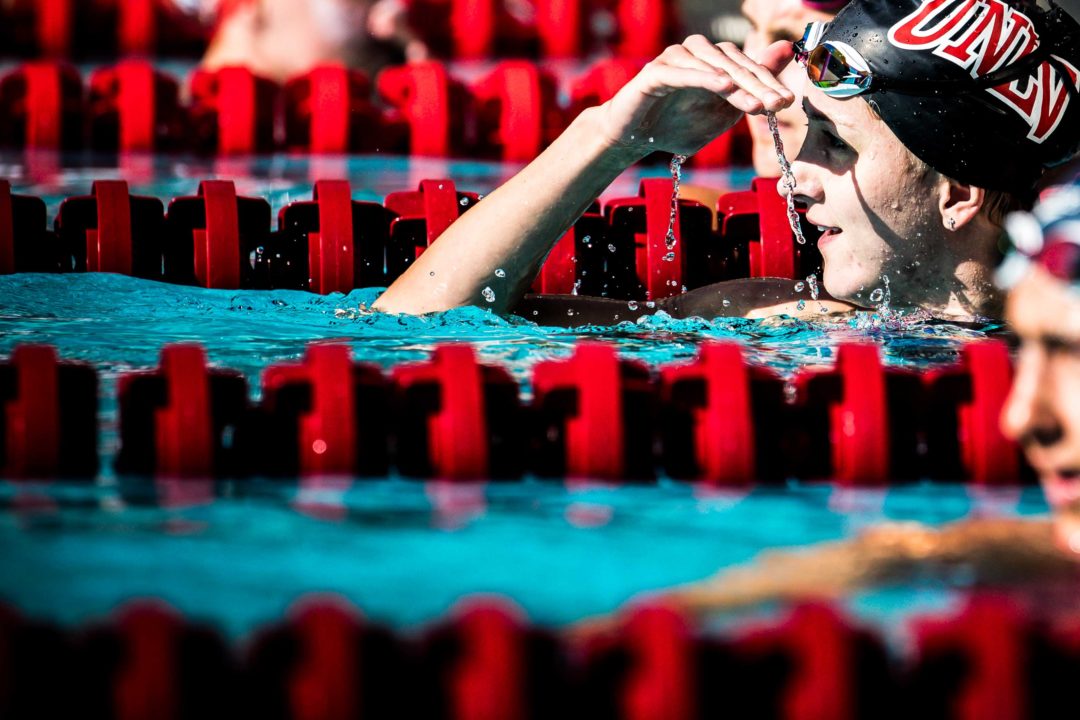 Kasia Wilk is the Polish Record holder in both the 50 and 100 meter freestyles in long course. She'll join the Cali Condors of the ISL. Archive photo via Jack Spitser/Spitser Photography

The latest addition to the inaugural season of the International Swimming League (ISL) is Polish sprinter Kasia Wilk, also known as Katarzyna Wasick*, who has signed with the Cali Condors.

Wilk is a 3-time Polish Olympian who raced in the 2008, 2012, and 2016 Games. She swam collegiately at USC, and currently lives in Las Vegas and trains as a post-graduate out of the program based at UNLV. Las Vegas will be the home of the championship event for the first season of the ISL.

Wilk enjoyed an All-American career in the NCAA, including placing 3rd at NCAAs in the 100 free and winning an NCAA title as part of a USC 400 free relay, but the last year has really been her big international breakout. At the Polish Championships in May, the 27-year old swam a 24.73 in the 50 free. At that meet (first in prelims, then in finals), she became the first Polish woman under 25 seconds in the 50 meter free in long course. She also holds individual Polish Records in the long course 100 free (54.22) and the short course 100 free (53.10).

Career Best Times, all within the last 15 months:

While Australian swimmer Shayna Jack hasn’t yet been banned from the league, pending the conclusion of her anti-doping proceedings, Wilk will serve as a backup for the Jason-Lezak-managed team in the event that Jack is not able to swim in the league. A suspension of any length for Jack in those anti-doping proceedings will lead to a lifetime ban for Jack from the ISL. Jack was destined to be one of the team’s top female sprinters. The Condors also have Mallory Comerford, Natalie Hinds, Olivia Smoliga to fill in those sprint freestyle events.

This brings the Condors up to an equal number of males and females on their 2019 roster, though they’d lose that equality if Jack is suspended. The other 3 American-based ISL teams all have more male swimmers than female swimmers.

The Cali Condors are scheduled to kick off the season as part of “Group A” in Indianapolis, Indiana on October 4th-5th where they’ll race against the DC Trident, the Aqua Centurions, and Energy Standard.

*Jack is currently suspended, pending the outcome of doping proceedings in Australia.

Congrats to Wilk. But Im still waiting for the ISL to release information on team Florida Man composed of Dressel and 15 clones of him

Polish lessons from Rafał i Artur?

I coached Kasia’a brother, Krzysztof, at U. of Bridgeport. He was a sprint relay NCAA Champion for us there.

Aha, gotcha. I spent a good amount of time in poznan over a couple years. Beautiful places in Poland. Always nice to hear about other people with connections there.
There are some good Juniors right now. I won’t lie, I expected more from the current generation (Wojdat, Czerniak, Kawecki). Czerniak always a dud at the Olympics, same with Radosław. Miss someone like Konorzewski (sp?).

Paweł Korzeniowski 😉 Good guy, knew him, & Otilya, very well back in the day.

Czerniak was coached for a long time by Bart Kizierowski, another Polish great from that era.

I organized a pre-worlds (Montreal) training camp in CT for the Polish team in 2005…their most successful World’s ever!